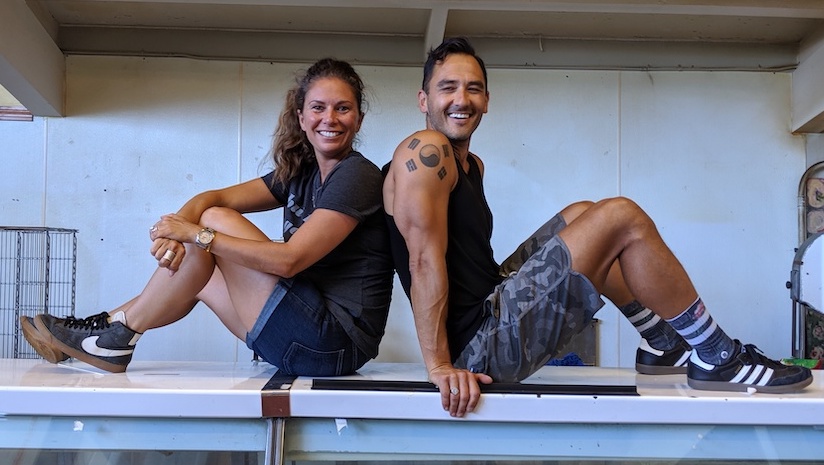 It’s also a story about a dog.

But it’s not about big boy Vader, the fluffy 95-pound black Russian terrier who greeted me at the door of the former Monte Vista Market. It’s about his older brother and little buddy Elroy, a miniature Doberman pinscher.

Elroy is a beloved four-legged family member for Chloe and Jay Dolata, owners of Carmel Belle, and brand new owners of Monte Vista Market. Way back when they moved into a bungalow in Birmingham, Michigan (on the outskirts of Detroit, the city where they worked together in marketing), he became one of their earliest symbols of togetherness.

That was nearly 20 years ago. Then and now, Elroy represents something bigger than his 8-pound frame.

“He is our first born,” Chloe says.

“It was our first time living together,” Jay adds, “when we were getting used to being a family.”

The most-savored household activity: shopping for food and drink.

“Grocery stores were our romantic place,” Chloe says. “Shopping together was our favorite thing to do.”

Their Valhalla was Papa Joe’s Market, where the deli, organic produce and prepped food were legend, the mood vibrant, the shopping carts equipped to hold wine glasses.

“It was just lively,” Jay says. “It was theater, action, so many good things we could cook or were cooked for you.”

This passion for high-grade grocery is the reason it’s always been the Dolata’s dream to open a market of their own. When they returned to Jay’s native Central Coast from Michigan it was partly because they wanted to make a play for Neilsen’s Market, which was up for sale. When that proved overly ambitious, they bought Carmel Belle, which remains a community treasure starring rustic sandwiches, selective sourcing and craveable juices. (With the new market taking priority, Carmel Belle is up for sale.)

Later they attempted to convert what’s now Seventh & Dolores into a multifaceted deli-market-meeting place, before Carmel competitors and City Council congestion made it more trouble than it was worth.

When the spot at 15 Soledad Drive gets its scheduled rebirth in spring 2020, it will borrow liberally from the example of Papa Joe’s Market, and a range of boutique grocers from L.A. (including Erewhon Natural Foods and Gjusta).

In a perfect world, the opening will coincide with Elroy’s 18th birthday in March, when he will turn 126 in dog years. (According to PetMD, average lifespan for his breed is 12-14 years.)

If he doesn’t make it that far alive, he will be there in spirit—and very real form too. The Dolatas pledge to have him taxidermied and positioned prominently near the entrance of a place that will be renamed Elroy’s Fine Foods.

This is the latest phase of exodus. Earlier $17,000 of product, supplies and equipment went to Food Bank for Monterey County and Al & Friends local homeless service, and the Dolatas’ Carmel Belle staff was divided into small teams and given three minutes to live the shopping-sweepstakes dream.

If you detect a dream theme, you’re on track.

Legions of locals have mythic memories of Monte Vista Market when it was run by Joe Solis and his loyal crew of official and unofficial family.

The sandwiches were a very strong point. Same goes for the barbecue. The selection of grocery staples and sundries were impressive, and the vibe was as welcoming as it gets. The store’s generosity with Monterey High football fundraisers, Monterey Police and other area benefits is hard to quantify.

The Dolatas are well aware of that legacy, even if it wasn’t exactly amplified by subsequent owners. Neighbors poking their heads in help guarantee that. The other day Joe’s sister popped by to pledge enthusiastic support and grab a Monte Vista Market floor mat for her brother.

“We’ve heard a lot from locals about Joe Solis and they want to see it restored to that glory,” Jay says. “That’s what we want to give to the community, with a modern twist.”

The vision includes: lots of organic and biodynamic choices for produce, craft beer from near and far (Paso Robles and Belgium), deli classics, wood-fired food, New York-deli style snacks (smoked whitefish!), seating areas indoors and out to eat flatbreads and drink wine from a multi-bottle dispenser. A central bar will serve everything from local vino and beer to Los Angeles-style tonics and smoothies (smoothies being a Carmel Belle strength). As construction gets underway, barbecue will be served in the parking lot and serve as both a recipe test and a teaser of what’s to come.

A transcendent priority will be gourmet prepared foods ranging from rib-sticking favorites to innovative salads. Another priority: allegiance to local producers and purveyors.

“It’s not going to be your traditional market,” Jay says.

Celebrated chef Sarah LaCasse will collaborate on the kitchen design, ready-to-eat menu and more. She’s most widely known for groundbreaking work with Earthbound Farm, and continues to do a robust amount of catering, consulting and private cheffing from Silicon to Salinas Valley.

“We do agree on the need for comfort foods, and sometimes those foods can be on the heavier side,” LaCasse says. “So we’re keeping a focus on lighter vegetarian and vegan options for all.

“‘We want everyone to be able to eat here,’ is something Chloe says and I agree with,” she continues. “We will pay close attention to utilizing grains that are gluten free and dishes that vegans can enjoy.”

Jamie Collins of Serendipity Farms—a regular contributor to Edible Monterey Bay—will help direct the produce. She describes a tendency toward “uber fresh, delicious and unique varieties of organic produce from truly local, small family farms that are grown for flavor and not for shipping long distances.”

She has other thoughts on what’s coming. “No waste is a passion of mine—utilizing everything,” she says. “So it’s very important to turn produce into prepared food that people can buy in the store and [take leftovers] to feed animals or compost, creating a closed-loop system.”

Mark Shelley of Tassajara Natural Meats will help with the bovine protein. Rudy Figueroa from La Marea of the Sea (a big hit at the MPC Friday farmers market) wants to set up a seafood counter. The Dolatas are also looking for an inspired florist.

“We have a lot of great artisans who haven’t had a platform or could use another outlet and are already in community,” Jay says. “Why replicate that?”

“The market we’re trying to create has all the best elements of what’s out there, and is a step above,” LaCasse says. “Not just a neighborhood market, but a destination, a la Jerome’s. You can find things there that you can’t find anywhere else—a curated selection of the best things available that calls out local farmers.”

The Dolatas are careful to add that customer service is a priority that can’t get lost in all the excitement. They’ve cultivated that at Carmel Belle, which is a good sign, and I imagine a number of familiar faces from there will appear on the other side of Carmel Hill.

For old-school Monte Vista Market loyalists like me, that is crucial because it harkens back to what was a priority here back in the day, and more important than a thousand delicious barbecue tri-tip sandwiches, though it was a lot less tangible.

Joe Solis knows all about that.

“What we did there, it was community,” says Solis. “That’s what we did.”

“It was a neighborhood grocery store and it tuned into the community. It was a fun time. I wish the new team well, and that they get it right.”