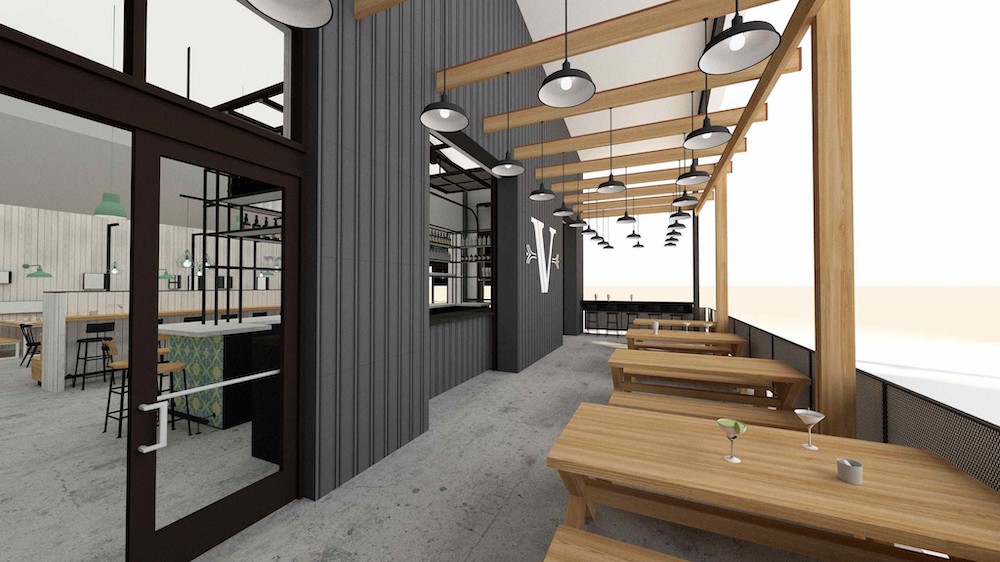 August 11, 2020 – Despite the pandemic, construction of the highly-anticipated Venus Spirits Cocktails & Kitchen in Santa Cruz continued with few delays and beginning Saturday fans of Venus Spirits will have a new place to enjoy those local libations along with a menu of salads, sandwiches, tacos and select entrees.

“We are super excited after this long haul to have the public back in our space,” says owner Sean Venus, who broke ground on the project 13 months ago. “I know the community has been really anticipating it and I think another spot on the Westside will just add to the vibrancy of what’s going on here.”

The new 100-seat restaurant and distillery on Swift Street is nearly complete, but due to COVID-19, the parking spaces in the front of the new building have become dining spaces. Temporary fences, picnic tables, party lights and umbrellas have replaced where the cars would have been parked, creating a fun atmosphere that will “vibe really well with the menu,” says Venus.

Once rain arrives, they also fortunately have some covered patio space that was the “normal” outdoor seating, with an abundance of garage doors that can easily open up and create even more outside space.

“We won’t be seating indoors until restrictions are lifted and we feel it’s safe for our employees,” adds Venus.

The original concept for the restaurant was a focus on shareable dishes, small plates, big platters and snacks that we could gather around a table together to enjoy together. Obviously, those times have changed, and so the menu has shifted a bit to offer more takeout, single items, and a shorter menu. “We will start with a limited menu, and then add more items as the kitchen staff gets up to speed on everything,” he says.

Over the past year, many applicants were interviewed for the executive chef position. At one point, chef John-Paul Lechtenberg from Hollins House had signed on for the position, but that partnership shifted and Venus ended up hiring another local, James Manss formerly of Süda, Sotola, Solaire and Chaminade. He brought over his sous chef Gabrielle Molina from Süda, working together to set up the brand new kitchen space and menu during this unpredictable time.

Snacks, a sandwich, a burger, salads, tacos, three entrees and some sides will be on offer, sticking to an upscale seasonal BBQ or “elevated picnic” theme, as Venus explains.

As for cocktails, we can expect some special things, as would be fitting for a distillery restaurant. Bar manager and drink developer Lindsay Eshleman has put together a drinks menu with some old favorites as well as some fun additions, including a slushie machine cranking out frozen Paloma Libres. There will also be draft cocktails, local beer and wine and a handful of shaken cocktails.

Ultimately, Venus explains that he is really trying to bring a true dining experience to this new form of outdoor eating. “We really want to provide a heightened level of service,” he says, with real glassware and things we would expect pre-COVID.

For some of us, it is not tempting to go out to eat right now, if we can make great things at home, on real plates for a lot less money. But Venus gets that and feels the same way, he hopes that the Venus Spirits Kitchen experience will give us that real restaurant feeling we have been missing so much these last few months.

The new distillery facility is right next door to Venus Spirits Cocktails & Kitchen, allowing guests to view where the spirits are made through an assortment of windows that have been placed in the shared wall. Cocktails may be enjoyed on the outdoor patios and most drinks will be available to-go.