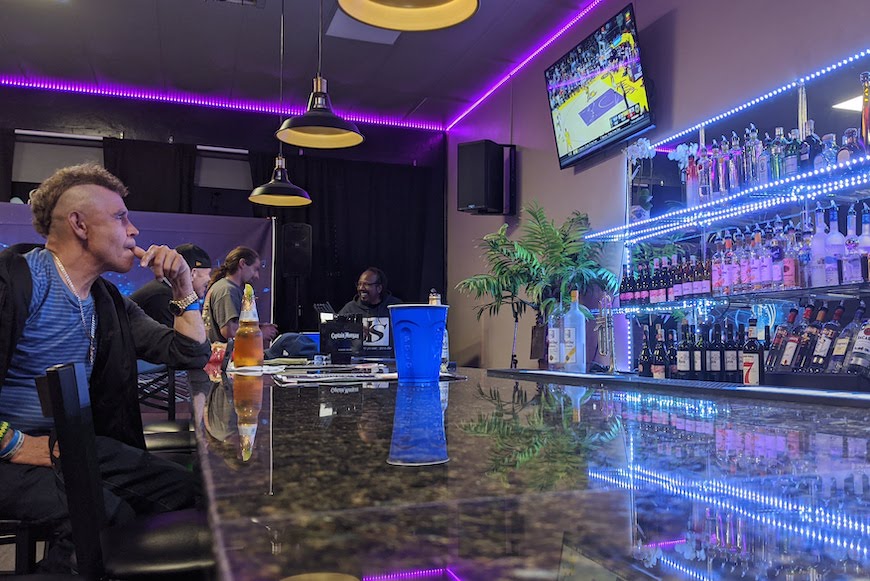 February 29, 2020 – Daryl Choates took a look around his brand new bar-club-restaurant, rested his elbows on the shiny bar, and smiled. A lot of local history led him here and he seems grateful it did.

That represents a contrast to the flurry of projects from a range of aspiring young business owners infusing downtown Seaside with new investment and energy and spots like Other Brother Brewing Company and Counterpoint Coffee: This most recent addition comes from an old-school place, complete with blues and soul food.

Choates has been a fixture in the community for decades, owning and operating Ord Market near CSU Monterey Bay seemingly forever, serving as a Seaside city councilman for a decade and a half and helping lead Monterey Bay Blues Festival for around a quarter century. Now he sees an ideal time to set up shop on the Broadway Avenue/Obama Way corridor, which is experiencing a rebirth after a long-coming $7 million project widened sidewalks, added bike lanes and bike racks, planted foliage and slashed fees for new businesses.

“It’s a great time to invest in Seaside,” Choates says. “The city leadership in developing downtown has really paid off.”

Deja Blue sits at 500 Broadway Ave. and promises more live entertainment than any other venue in the city. Leon Joyce will book the live jazz, Choates will draw from his blues connections and a house band will support the music schedule. The comedy element comes on the heels of a popular bimonthly double-header shows at the Retired Men’s Social Club—speaking of old-school Seaside—with the likes of touring comics like Hope Flood and Larry La La.

“We want couples to come out and enjoy live music, comedy and dinner,” Choates says, noting a 10-percent discount for partners out for “date night” (with a mention to the server).

The food is straightforward and fewer than 20 items—things like lacquered baby back ribs, garlic fries and chicken drumettes on the starters; grilled New York steak, seafood cioppino and shrimp and grits on the entrees; and a few desserts.

Outside a modern brown has replaced the mustard-yellow paint scheme. A peek inside reveals a complete overhaul from its days as dive bar The Dunes, with a long black marble bar on the opposite wall of where it sat in the past, clean black stools and low tops, a sizable stage to the left of the door as you walk in, and neon lines framing the bar and wider walls.

Hours are 4-11pm daily, until 1:30am Friday and Saturday. Kitchen hours are 4:30-11pm Monday-Saturday; Chef Jeffrey Walker, aka Chef Jeff, will helm the kitchen.