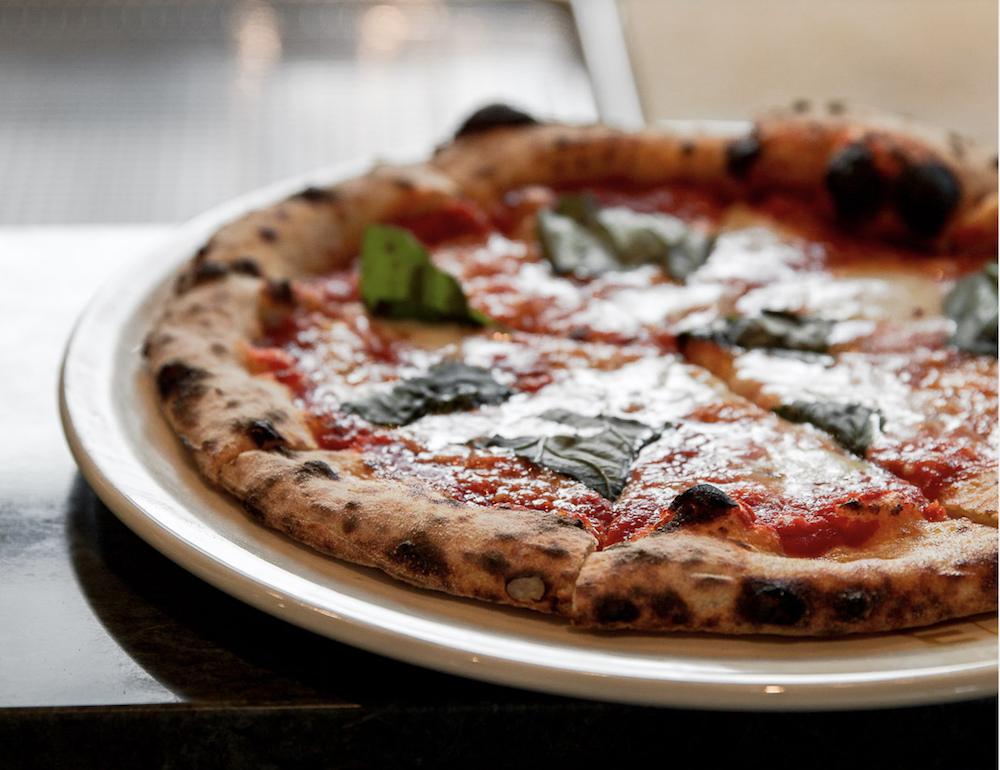 March 24, 2020 – A visionary chef, a seasoned team, a harmony of two of the world’s tastier food cultures, clever comfort food…as far as recipes for a successful restaurant go, this is about as tempting as it gets.

Mentone, from celebrated chef David Kinch and many of the same people behind three-Michelin-star Manresa, opens for takeout orders in Aptos tomorrow, March 25. The plan is to offer a limited and representative taste of the eventual wider menu, from 4pm until sold out Wednesdays-Sundays, with three pizzas, a signature salad, cocktails and wine to-go.

(Along with gift cards and merchandise, food will be available for pre-order at Mentone’s Toast Tab page starting Wednesday at 12:01am; it also allows a peek at pricing.)

The 12-inch pizzas—made with 48-hour fermented dough and baked in the wood-fired Valoriani oven—include a Margherita, a pesto and crescenza cheese, and a sopressata and Calabrian chili. Mentone’s take on a salade Niçoise, the “Insalata di Riviera” is also available (and serves two).

Vinos curated by wine director Alyssa Twelker, like the food, are inspired by the coastal region where Italy and France meet, with Ligurian, Italian, and Provençal selections. Bar director Jason Strich has crafted cocktails to add to the party: a house Negroni and two 16-ounce sharable offerings, a Better Than Corona (with gin, Finocchietto, vermouth and sour apple) and a Harvey Who? (with vodka, Galliano, Meyer lemon and bitters).

“We figured this would be a nice way of easing into operation. Selfishly, it lets us practice what we’re good at, and if we choose to expand we can do so,” says Kinch, a Santa Cruz resident who has long wanted to open a restaurant closer to home.

“We wanted to provide a little from each category and highlight what we’re doing with our dough and pizza and wood-fired oven,” he says, “and we wanted to do things that travel well—gnocchi isn’t the same after 20 minutes in the car.

On the eve of opening, it’s clear what Kinch and Sullivan are most stoked about.

For Kinch, it can be summed up in two words: the dough.

“The dough is something we’ve been working on for quite a while—and that includes people on our team who have dedicated their whole professional lives to pizzas,” he says, citing the work of Mentone executive chef Matthew Bowden, formerly Manresa’s executive sous chef. “The experimentation and testing has gone through many reiterations. We’ve exhausted all possibilities, and we know exactly what we want.”

What they want is a naturally leavened dough so delicate any mishandling leaves impressions, hand-shaped crusts composed of a mixture of red hard wheat and soft white wheat, fired on 100% almond wood.

“It’s an execution thing,” Kinch says. “It’s about attention to detail, gentleness, treating it lightly and with respect.”

The result is a dough that is both aromatic and supremely easy to eat. No gut bombs here.

“We want it to be a light, digestible, delicious product,” Kinch says. “The dough we’re producing is right there.”

For Sullivan, the biggest thrill is to be finally launching after months and months of eager waiting.

“The most exciting thing is just getting this place open,” he says. “It’s a surreal situation we’re in: Our strategy, with so much anticipation, is to make sure the person at the door is able to proficiently articulate what we’re trying to do without saying, ‘No, you can’t come in.’ By starting small, and limiting what we can do, we can build to a place where [when Mentone fully opens] it will hit—and exceed—expectations.”

Veteran food writer and Edible Monterey Bay contributor Raúl Nava points out another element to be enthusiastic about: With pizzas and bottles of wine starting at $16 and $30, respectively, it gives those not able to cough up hundreds for the Michelin-grade experience a taste of what makes Kinch and company a local treasure.

“Without question, Manresa is one of the country’s most lauded dining destinations, but it’s out of reach for many of us either due to distance or finances,” Nava writes by email. “I’m excited local diners will have a chance to try David Kinch’s unique culinary craft at a more accessible concept like Mentone.”

The name comes from the Italian spelling of the French Mediterranean town of Menton, which sits on the border with Italy (pronounced Men-tone-eh). As Edible’s editor-publisher Deborah Luhrman wrote as part of a preview tasting at Manresa Bread’s all day café in Campbell that included trenette pasta with hand-ground pesto and provencal tarts made with caramelized onions, anchovies and olives, “The cuisine is intended to reflect both the Italian and French sides of the border and will center around a rotating menu of five or six pasta dishes and five or six wood-fired pizzas.”

In other words, Ligurian-leaning comfort food, which sounds like just what the psychiatrist ordered in vexing times. That’s not lost on Kinch.

“Everybody is looking for something that’s not too challenging or provocative,” he says. “People are nesting right now, focusing on food, clothing and shelter, taking care of their health, making sure loved ones are safe. They’re not looking for adventure. Food that touches the most buttons, that they can relate to, is really striking a chord.”

While Mentone makes its debut, Kinch’s other restaurants, Manresa and The Bywater, are also doing takeout. (Manresa Bread is closed.) Manresa is doing its rotating “family meal” 4:30pm-7:30pm Wednesday-Sunday; details and menu are released the day previous via its Instagram page. The Bywater will begin offering take-out with a small menu of savory items as well as cocktails and retail beer/wine, including a long list of cellar selections Wednesday-Sunday 2-6pm; more info on that is available through its Toast Tab.

So there’s that: We may be hunkering down like we’re at war, but we don’t have to eat like we’re in a bunker.