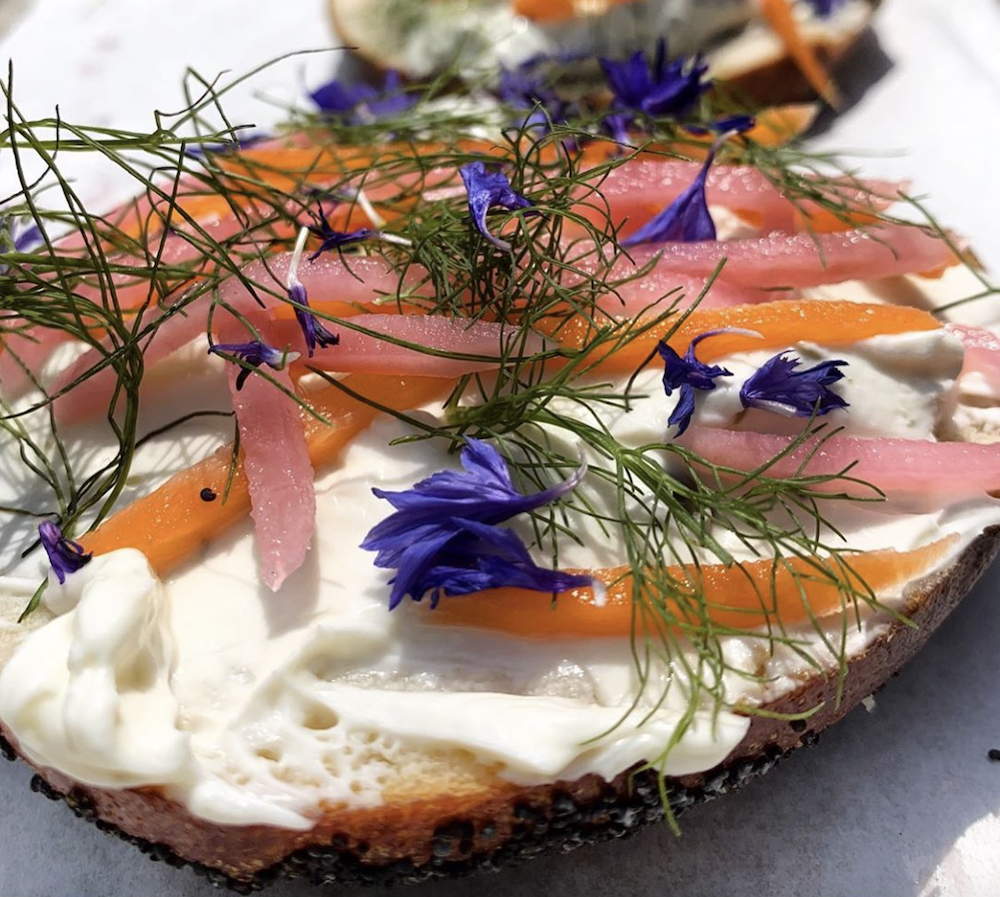 September 29, 2020 – There are a number of crucial ingredients that go into a Holey Roller bagel. Those ingredients are helping turn the pop-up treasure into a Surf City institution.

Like the flour from Keith Guisto Bakery Supply in Petaluma, which goes into bagels boiled and baked for an oh-so-New York-style texture that’s crunchy outside and chewy and malty inside.

Like the locally-grown produce from Blue House Farm in San Gregorio and Fifth Crow Farm in Pescadero—which goes into habit-forming seasonal schmears like the Calabrian-chile-and-basil and cucumber-dill-roasted garlic.

Like the king salmon that’s from sustainable New Zealand farms or caught wild on the West Coast and goes in the slow-cured classic house lox and its pastrami-spiced cousin.

Like the Western red cedar steam—which the bagels breathe in the oven, after being boiled and before their finishing bake—giving them a rounder flavor profile and even cooking treatment.

But there are less tangible ingredients that are every bit as important in delivering crowd favorites like the salt, poppy and everything bagels.

Like heritage. In fact, if Long Island native and Holey Roller co-founder Kevin Rodgers were to build a campaign for bagels as The World’s Perfect Food, the platform would be based on “edible nostalgia.”

“I think we all have that thing we eat or ate as kids that’s centric to the area we grew up in or a specific experience or trip that reminds you of it,” he says. “That’s how it’s always been for me. As a kid I ate bagels at least a few times a week. Once I eat one it transports me back to that space and time. It’s comforting.”

“Community support is the biggest thing for us,” Rodgers says. “It feels really nice.”

“They’re just making the most New York bagel around here, in small batches, baked fresh,” he says. “The authenticity is what separates them.”

And, finally but most importantly, resilience: Like many operations in the food world and beyond, HRB has been battered and blessed by COVID-19 and the fires.

Battered in the sense that coronavirus really hit as Rodgers and his business partner Tim Edmonds—who spent a chunk of his chef career in New York—were readying for their first pop-up at Bad Animal in Santa Cruz in March. That  was cancelled, and COVID continues to make life complicated.

“Like everyone in the food business, [we] had our entire livelihood taken away,” Edmonds says. “You either sit there in shock or pivot and try to do something else.”

Then another haymaker came with the CZU Lightning Complex Fire.

Rodgers and his girlfriend Jenna awoke the Sunday after the lightning storm to the smell of smoke and no fire. Monday brought bagel work while power returned, but by Tuesday night and early Wednesday it was out again, and Rodgers describes an unsettling feeling descending—along with curtains of ash. That was amplified by the isolation of the mountains, where cell service is scarce in the best of times.

“Something inside told us, ‘We gotta get out of there,’” he says. “It was a feeling in the pit of your stomach: Let’s go.”

They packed their cars with extra clothes and important documents. On the way out they could see the fire 200 yards from their road, with firefighters on the street battling the blaze.

They took refuge at The Mountain Terrace event center in Woodside only to be evacuated a couple of days later. Within about a week they learned the house they were renting in Swanton was leveled. Everything but a bathtub and washer dryer went up in flames. Fortunately they’ve been welcomed in by friends.

“Everybody’s been taking really good care of us,” he says. “

Blessed because COVID slowed work at The Mountain Terrace, where they both work in the kitchen and Edmonds serves as chef. That allowed them the bandwidth to tinker and test their recipes and ramp up production.

“These are avenues I’ve never explored because I’ve been too busy,” Edmonds says. “I’ve gotten to branch out and do things I’ve never attempted before.”

Rodgers adds that it’s been a port of calm in deeply challenging times.

“Some sense of normalcy is welcome in this chaotic time, and rolling out bagels provides that,” he says. “Everything is in such a state of disarray in general it’s nice to stay busy and do something we’re passionate about.”

At HRB’s pop-up stops, everything is pre-prepped and day-fresh, with a half dozen running $12, full $24, and lox $7-$12 pending size. Pizza bagel kits are proving popular at $40 for six bagels, homemade San Marzano sauce, heirloom tomato, basil mozzarella and burrata. Half-pint schmears are $5.

Rodgers points out that the half pint will work for two to four bagels, which sounds like a broad range—until he elaborates.

“Well, I schmear heavy—I want to have to leave cream cheese, not add it,” he says. That’s a classic New York thing. You get a bagel with the right amount and you should have to wipe it on the parchment.”

The Holey Roller team’s favorite response to their food is the gratitude of its audience.

“That’s what makes it all worth it: When people are super thankful,” Rodgers says. “That’s a key reason why we cook and work in this industry: to create an experience, to take them back. That’s what keeps us going.”