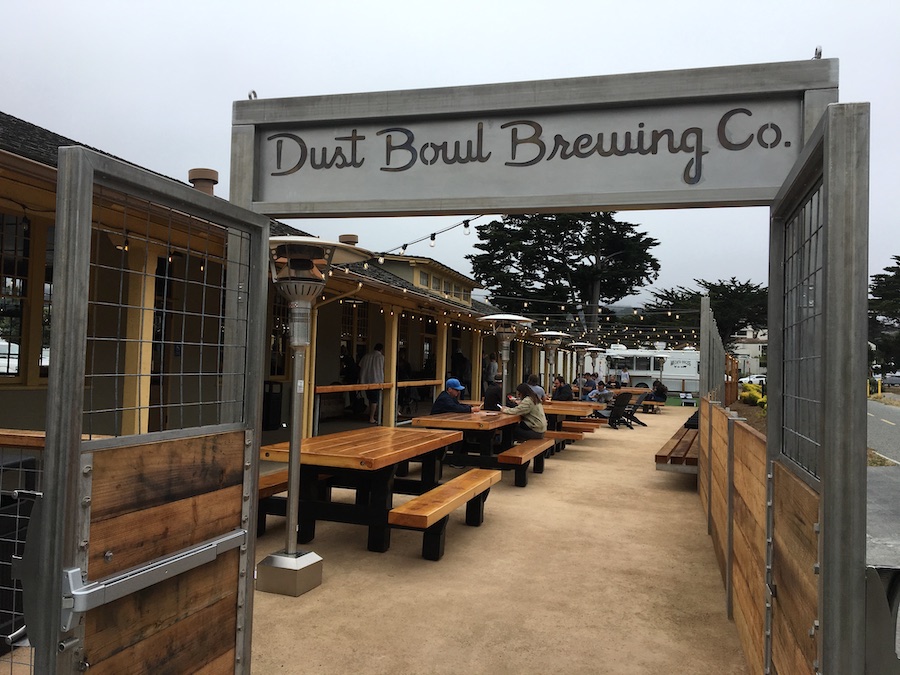 June 25, 2019 – No more than two hours after it officially opened, around 1pm on a June-gloom Thursday, Turlock-based Dust Bowl Brewing’s new Monterey location is alive with activity.

Almost every seat at the long dark steel bar is occupied. Cheery beer-tenders pull drafts from a shiny U-shaped tap line with 24 spigots, including 22 Dust Bowl options, a nitro feed and two spouts for draft wine. (At publication, those were a Maddalena Chardonnay and Cabernet, out of Monterey and Paso Robles, respectively, $9 each.)

More patrons dot the narrower bars that flank the primary service bar and offer added seating and ease of flow. A half dozen people sip from bulbous Belgian-style glasses and tap on laptops (free WiFi is available) while perched on neutral-colored couches and lounge chairs in the northeast corner. Opposite that, at least 22 different canned and bottled house beers of varying volumes await interested thirsts in glass-paned coolers.

Outside, the chill of the day is broken by a new glass-and-wood windbreak around the patio, heat lamps, and a communal fire pit surrounded by Adirondack chairs. Everyone from kids to 50-somethings play giant checkers on polished picnic tables.

Next to an artificial turf lawn with Dust Bowl-branded corn-hole boards, independent and locally owned Wedo’s Tacos is serving from a truck tucked into a custom parking spot.

“Everyone from the area has come out and showed us a lot of love,” Leidig says. “It’s been a lot busier than anyone expected, which is nice. We’re super appreciative of being able to open a new business in a town we’re from.”

So yes, the scene offers a complementary array of elements, but the key ingredient remains…beer.

Fortunately Dust Bowl does it with aplomb and depth, and has the awards to prove it.

In fact, a prized accomplishment launched the operation when brewer Don Oliver won a Samuel Adams Longshot Homebrew competition in 2006 and founder Brett Tate, who wanted to open a brewery, spotted his name in the local paper.

On opening day, I sat next to two couples who happened to be in town from Turlock on other business, and stopped by to see if their hometown guys were open. I asked them what they’d tell locals about the 10-year-old operation, which runs a brewery-tap house and a newer taproom in Turlock—which sits between Modesto and Merced.

“Consistency and quality,” Troy Roos said, “and atmosphere—just look outside.”

“There’s a huge variety of beers, and things to do,” Melanie Moen added. “The people [behind it] are great. All their spots are really family-friendly, with lots of outdoor games and things to do.”

“It’s really good beer, and the family are good people,” her husband Rick offered. “The food [in each location] supports their beer, but they want to be known for their beer.”

The Fruit Tramp Kettle Sour presents a mellow strawberry tartness that occupies palate and imagination. The Hobo With a Hop Gun dry-hopped pilsner delivers a German style, lemony edge and crisp finish. The Change Order IPA balances pine forest and tropical fruit. The uber-popular Therapist double IPA (slogan: “No appointment needed”) has no business being so smooth at 10.4 ABV. The Porkchop Express New England-style IPA and Miao Ying hazy pale ale both offer more interplay of citrus and bitterness. The flagship, easy-drinking IPA Hops of Wrath happens to be the beer that started it all, and the overall best-seller.

They rotate the beers furiously—after the base eight beers, brewer Don Oliver is free to do what he wants in symphony with trends and seasons. At one point my informative barkeep broke out a 2019 Beer Brands calendar, which graphs out the year-round brands and when the specialties are available month to month. It’s a detailed document.

Touring the state to author Moon travel guidebooks, Seaside-based writer Stuart Thornton has seen his share of beer houses. “One thing that really impresses me about Dust Bowl is the amount of beers they have on tap,” he says. “They’ve got everything from potent triple IPAs to pale ales and fruit beers and even a low calorie beer. It has all the bases covered for different beer drinkers.”

“We look around at what’s working trend wise, and I’ll dive in and do some research, from old stuff to what newer breweries are doing,” Oliver says. “We like to experiment with lots of fun stuff, and there are a lot of great ingredients out there, and lots of produce in California. We also like to have sales reps bring in good beers from outside of our area, because oftentimes out there it’s a different type of beer drinker than we have in Turlock.”

The key strength, he adds, is something more than smooth high-voltage IPAs and a broad spectrum of lagers.

“I think what we’re best at is not letting people taste beer we don’t think is good enough,” he says. “We would rather send it down the drain.”

The scratchy beginnings of early 1900s Central Valley migrants is echoed in more than the name. Their motto is “Great beer born of hard times.” A Steinbeck quote appears in chalk above the takeaway beer coolers: “There’s nothing in the world like that first taste of beer.” Framed historic photos provide imagery of itinerants heading west in battered cars on lonely roads. Several generations back, founder Brett Tate’s family loaded up a Model A and left Oklahoma, and Grandpa Tate even “rode the rails” for a spell to support the family before it finally settled in California. Dust Bowl leadership likes calling its Monterey spot the Tap Depot, a nod to its backstory as an operating train station from the 1800s to the 1970s.

“We created a space that’s social and comfortable,” says co-owner Brett Honore. “Beer is meant to be shared with others.”