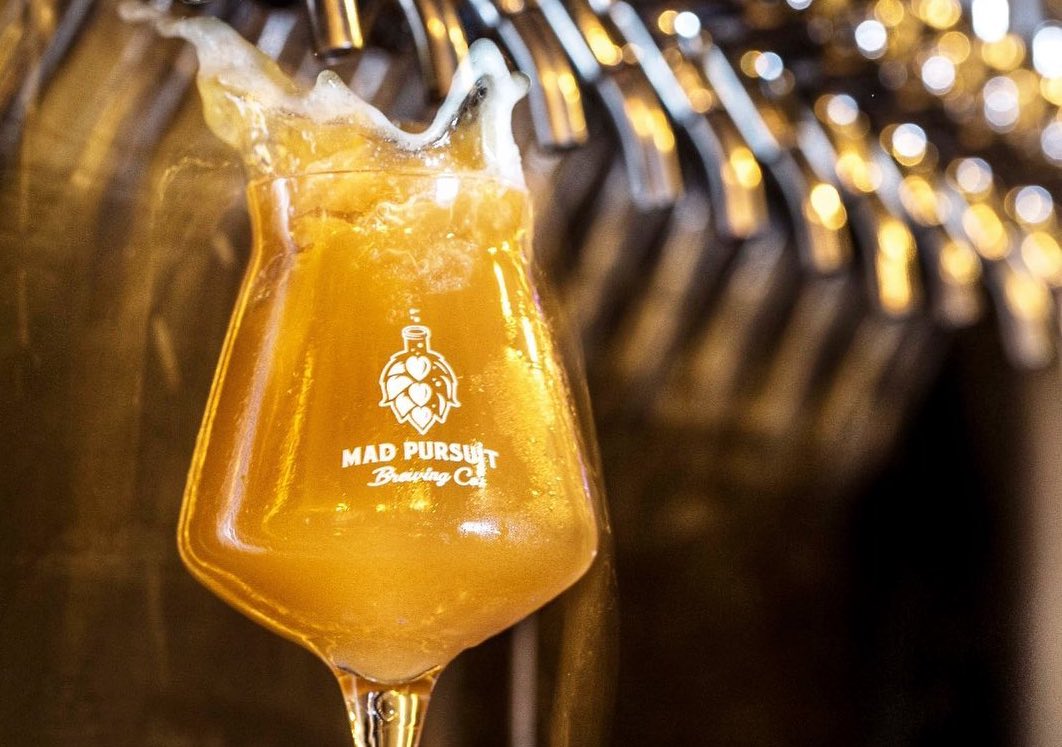 July 6, 2021 – Brewing craft beer is almost always a labor of love, but it’s more like an obsession for the owners of Mad Pursuit Brewing Co. in downtown Hollister.

After all, it’s taken close to four years to get the area’s latest brewpub/brewery from conception to completion, which included a long pause due to COVID. The pandemic slowed it down, but couldn’t stop the brewpub as it finally crossed the finish line.

Mad Pursuit’s taproom opened this past weekend, first with a soft opening Thursday for family and friends, then a special event for the company’s 100 founding members followed by the official opening to the public Friday evening.

Saturday and Sunday, being not only the July 4th holiday weekend but also the start to the unofficial Bikers Week in Hollister, was a little crazy, needless to say. But for Alexander DeLeon, who co-owns Mad Pursuit with cousin Lino Gonzalez and their friend Paul Swearingen, it was exciting to see the long-awaited dream come to life.

It’s all about “pursuing the perfect pint,” which has become a tagline for the brewing company, which focuses on a wide and creative range of beer styles in its small batch artisanal operation.

“We love every style of beer,” says DeLeon, who is currently working on an apricot sour that uses fruit from Hollister’s B&R Farms, and other brews that employ locally-grown hops from Hollister Hop Yard.

It all started when Hollister natives DeLeon and Gonzalez put their heads together and decided this was something they wanted to jump into. “We figured, Hollister is a little underserved, so let’s build a brewery,” says DeLeon, who previously was a manager at the local movie theater complex, and is now Mad Pursuit’s general manager.

DeLeon had been experimenting with home brewing—for his first batch, he didn’t have proper equipment so he used a turkey deep fryer and an Igloo cooler for the mash—and he was hooked. Then his cousin showed up with a business plan for the brewpub, and they embarked on the long journey toward opening. Additional help came from Swearingen, who had been a home brewer for more than a decade.

Several different locations were considered, DeLeon says, but they settled on downtown Hollister’s main drag as the location for the brewery and taproom.

Getting any kind of food or beverage establishment built and opened is a long and grueling process under the best of circumstances, but the pandemic added another layer of complexity: “COVID threw a wrench into things,” says DeLeon.

Luckily, they had help and support from other craft brewers, including folks at Brewery Twenty Five in San Juan Bautista, Buena Vista in Santa Cruz and Other Brother in Seaside, all of whom DeLeon says encouraged them every step of the way and gave them valuable advice. Some, like Brewery Twenty Five owners Fran and Sean Fitzharris, showed up to hoist a glass to Mad Pursuit’s grand opening over the weekend.

Support from other downtown businesses was also present, with another taproom in the same block shutting down early so that its staff could celebrate with Mad Pursuit. DeLeon says that the Pour Decisions team has been big fans from the get-go, even serving Mad Pursuit’s brews in their establishment prior to the Mad Pursuit opening. Other places carrying Mad Pursuit’s wares include nearby Grillin & Chillin Alehouse and The GardenShoppe n’ Bar.

Over the holiday weekend, the new San Benito Street brewpub was packed with locals and visitors, who sipped on a selection of housemade brews as well as guest beers from Fruition, Buena Vista, Other Brother and other craft brewers as well as local wines from Calera and DeRose. For the opening, Mad Pursuit’s debut offerings included two IPAs, a Munich-style helles lager, a pilsner and their High Octane Imperial Stout, described as “robust and decadent … basically dessert in a glass.” Light pub fare is also offered, including nachos, tacos, pretzels and pizza.

Mad Pursuit also honored its local roots in the building of its brewpub in a century-old building on San Benito Street. When original wooden floorboards had to be removed from the brewing area, the team saved them and used them for the brewpub’s bar top, extracting the nails, cutting the wood to size and sealing it with epoxy.

Says a Mad Pursuit Instagram post from earlier this year, “Our hope is that for the next 100 years, there will be many a beer shared and many great memories made around this one-of-a-kind bar top at MPBC.”