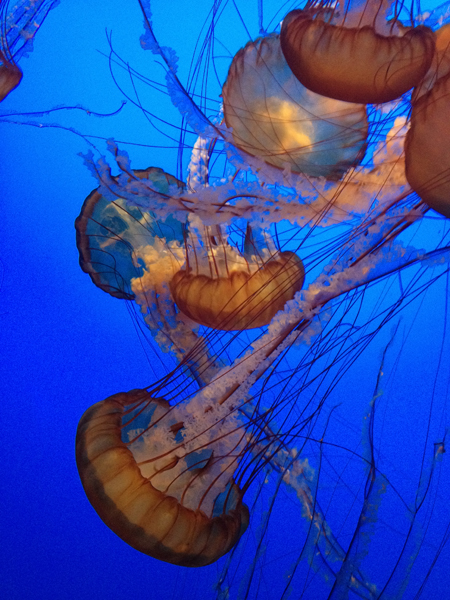 Calls for a blue revolution in aquaculture, a new deal for oceans and more sustainable farming practices punctuated the 11th annual “Cooking for Solutions” extravaganza at the Monterey Bay Aquarium on May 17–20.

The conference and food festival brings together celebrity chefs and environmentalists to advance the cause of sustainable seafood under the aquarium’s famous Seafood Watch program.

“It’s difficult for any chef to have the time and smarts to research all of this, so I am forever and ever indebted to Seafood Watch,” said chef Rick Bayless, owner of the Frontera Grill in Chicago and host of the PBS series Mexico: One Plate at a Time.

How to meet the world’s growing demand for seafood while improving the health of the oceans was the overarching theme of the conference. Dr. Callum Roberts, of the University of York, called for a “new deal for the oceans and a stress-busting plan to reinvigorate life in the sea.”

In order to protect oceans for maximum fishing yields he urged that:

– 30% of ocean area be protected from fishing

One of the most worrisome trends in fishing is skyrocketing demand for so-called “forage fish” like herring, anchovies and sardines. They are a critical link in ocean ecology because they feed on plankton and in turn are eaten by larger species of fish. Without them, the larger fish that we all love to eat will not thrive.

Demand is growing because forage fish are ground up and turned into fishmeal and fish oil to be fed to animals or used at fish farms. Just 10% of the catch is eaten by humans.

The Institute for Ocean Conservation Science recommends a 50% cut in harvesting of forage fish. Executive Director Dr. Ellen Pikitch, of Stony Brook University, said, “Forage fish are twice as valuable left in the ocean as caught in a net.” She said that forage fish need to be included in fishery management plans and that a wider variety of fish species needs to be used in making fishmeal for feeds.

Paradoxically, experts recommend eating more sardines and anchovies as a way that consumers can help save them. They have even formed an ad hoc group of cheerleaders for the under-appreciated fish called the “Sardinistas.” By eating forage fish rather than salmon or something else higher up on the ocean food chain, you can effectively reduce your ocean footprint.

Seafood Watch considers Pacific sardines a “Best Choice” fish for sustainable human consumption, and “Cooking for Solutions” Chef of the Year Michel Nischan, a pioneer in the sustainable food movement, issued a challenge to all participants: “I will eat more sardines,” he made conference-goers pledge, and “I will make sardines taste delicious,” he had all the chefs promise.

Half of all seafood consumed today is farmed, but “Do we want our oceans to be feedlots or healthy food webs?” asked Dr. Geoff Shester, California program director for the international conservation group Oceana.

“Aquaculture needs to double by 2050 to keep up with growing demand, but it needs to be done right,” said José Villalón of the World Wildlife Fund’s U.S. aquaculture program.

Currently it takes about four pounds of fishmeal from forage fish to grow one pound of farmed salmon, and there are other problems like fish lice and the use of antibiotics in some countries. The goal is to get the fish in/fish out efficiency ratio in the range of one and a half to two pounds of fishmeal for every pound produced.

Villalón reported that DuPont has had good results with experiments feeding yeast to farmed salmon instead of fish oil. The yeast-fed salmon had even higher levels of omega 3 than those raised using traditional methods. He also said farmed mussels and oysters require no feed from other fish and contain loads of omega 3s. Eating a bowl of mussels provides half a week’s worth of omega-3 fish oil.

In the face of much conflicting information on the sustainability of fish farms, it was announced that the nonprofit Aquaculture Stewardship Council would begin certifying fish farms later this year.

USDA Deputy Secretary Kathleen Merrigan added that the government agency has been under pressure to come forward with standards for aquaculture. “Maybe we will have a proposal at the end of 2013,” she said. “It’s in the queue.”

It’s not just the oceans that are being depleted. “This is the most pivotal moment in human history, and we are running out of planet,” said Dr. Jonathan Foley, director of the Institute on the Environment at the University of Minnesota. “We are hitting planetary limits of land, water and air.”

He gave a frightening presentation at “Cooking for Solutions” on the challenge of feeding the world sustainably as the population rises to nine billion. It is well worth watching a similar presentation he made at TedX on YouTube (http://youtu.be/uJhgGbRA6Hk).

Foley said agriculture and grazing currently use 40% of the land surface of the earth, and 70 to 90% of all water usage goes to irrigating crops. “We eat more water than we can ever drink.”

He claims agriculture is also responsible for 30% to 40% of all greenhouse gases, through deforestation, methane from cattle and rice fields and nitrogen released from fertilized soil.

“We have two billion more people coming to dinner by 2050,” said Foley.

But those are not the people he is worried about. He says even greater pressure than population growth on the food supply comes from a growing middle class with “four billion people becoming wealthy and wanting to eat more expensive foods.” So the food supply needs to double by 2050, he asserts, with two-thirds of the demand coming from changing diets and one-third from population growth.

Foley said in order to meet these challenges we need to:

The conference wound up with a bit of good news from Michigan Senator Debbie Stabenow, who chairs the Agriculture Committee. She reported that the 2012 Farm Bill has passed out of her committee with bipartisan support and makes “the most changes in a generation.”

If passed by the full Senate and the House in its present form, the Farm Bill would cut $23 billion from the budget deficit. It would put an end to controversial crop subsidies for certain commodities and close a loophole that allows payments to people who are not farming.

For the first time ever, there is a section of the bill entitled Specialty Crops and Organics, which is hugely important for California’s fruit and vegetable growers. That section would increase block grants for research and promotion of specialty crops. It also would triple funding available for farmers’ markets and encourage them to become local food hubs. There would be increased support for farmers transitioning to organic cultivation, and it would make crop insurance available for small, diversified farms.

The 2012 Farm Bill is expected to go to the Senate floor in June, the House in July and, hopefully, be resolved by the end of the summer, before the existing Farm Bill expires.

1 thought on “Cooking up a Sea Change”