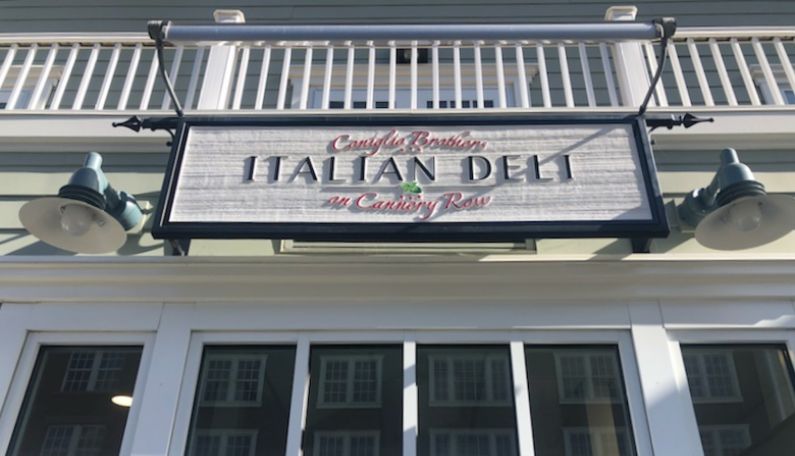 November 19, 2019 – The location of the forthcoming Coniglio Brothers Italian Deli is about as touristy as it gets. Its DNA, meanwhile, is about as local as can be.

Sandwiched between Monterey Bay Aquarium and Intercontinental The Clement Hotel, the space at 750 Cannery Row (formerly Shen Design Studio) enjoys as much foot traffic as any spot between Santa Cruz and San Luis Obispo—and certainly as much bus traffic, as big tour liners decant their passengers right in front.

The great grandfather of namesake deli brothers Jason and John Coniglio, Pietro Ferrante, is considered one of the founders of the Monterey fishing community and honored with a statue on Fisherman’s Wharf. Their uncle Peter Congilio served as mayor of Monterey for years. More importantly—for the purposes of the deli, anyway—their uncle Phil Coniglio opened and operated Mediterranean Market on the iconic Carmel corner across from Devendorf Park for a half century. And their dad John ran a sibling Med Market at Del Monte Center for nearly 20 years, from the late ’60s into the ’80s.

The place most locals called “Med Market” rode a blend of memorable Italian-style deli sandwiches, prepared salads, curated drinks and imported sweets that made it an institution that held solid for generations before closing in 2003. (The family still owns the building.)

Jason describes the new market as a “scaled-down version” of the Med Market with many of the same fundamentals: Cured meats and cheeses, both imported and domestic, will be sliced to order and available in small doses or by the pound; breads will arrive fresh from Palermo Bakery and Paris Bakery daily; a beverage selection will include local beer and wine with some Italian representatives; baskets will be themed for picnics or gifts; all items will be designed to carry out.

His brother John describes his own role as “the bridge from yesterday to today.” He remembers getting the day’s bread delivered to their home, which meant his school lunch always included a steaming roll. He started “working” for the family markets delivering Christmas baskets dressed as Santa Claus at 6 and later would stock shelves in Carmel with Uncle Phil in the 1980s and assistant manage with his cousins in the 1990s.

“This is absolutely ingrained in our muscle memory, the pride they had in their business,” he says. “When we were kids and in charge of stocking things, all the labels had to be lined up perfectly. We were taught young.”

He adds that people will recognize what they see on Cannery Row.

“My brother has really, really focused on making the past relevant today,” John says. “If you know my uncle or my dad, and the affinity the Peninsula had for our family and the affinity my family had for the Peninsula…[Mediterranean Market] was the heart and soul of Carmel and Del Monte Center. Everybody knew about Med Market.”

They both sound most excited about the made-to-order sandwiches, a hallmark then and now.

“What we’re really trying to do is an homage to the original recipes,” John says. “It has been impossible to get one of those Med Market sandwiches anywhere else: a perfect combination of freshly sliced, high-quality salami or roast beef or ham or turkey—a quarter pound—fresh tomato, fresh lettuce, freshly sliced cheese, and the key ingredient, amazing bread delivered daily.”

The final input: the family’s “trade secret” sauce built on mayo and Dijon and a few other elements that are guarded closely and, John says, “let you know you’re having a Mediterranean Market sandwich.”

They’re aiming for a sizeable sandwich at around $10. “Nothing cheap, good quality, but price-conscious,” Jason says. “We want to be the place where locals working on Cannery Row go for a really good fresh sandwich and not pay tourist prices.”

That Coniglio, Horace, opened My Attic tavern in 1937, which happens to be the last locally centric family business Jason recreated, in its original Alvarado Street location in 2012. My Attic the redux closed in 2016 after the water main erupted, shutting down the bar and allowing the landlords to terminate the lease. “History, Heritage, Hospitality” also appeared on the wall there.

John and Jason’s cousin Cara Mia Coniglio operated the original Mediterranean Market after her father Phil retired—and remembers people accosting her when it closed, including a woman who ran up to her in the shower at Monterey Sportscenter demanding, “Where am I going to get my salami?”

Now Cara Mia is advising on recipes, sourcing and supplies.

“We’re bringing quality back,” she says. “We’ve known the business. We’re going to bring back the real deal, with a timely spin. People are still sad about Med Market! The new deli is just so much fun. We’re really thankful for what the boys are doing for our family.”

Given the 100 percent grab-and-go concept, packaging will be a point of attention for conscious clientele. Coniglio pledges sustainable vessels and as little plastic as possible. It’s a safe bet the anti-plastic pioneers a couple doors down at Monterey Bay Aquarium will help hold them accountable.

The conservative estimate on an opening date is Dec. 15.