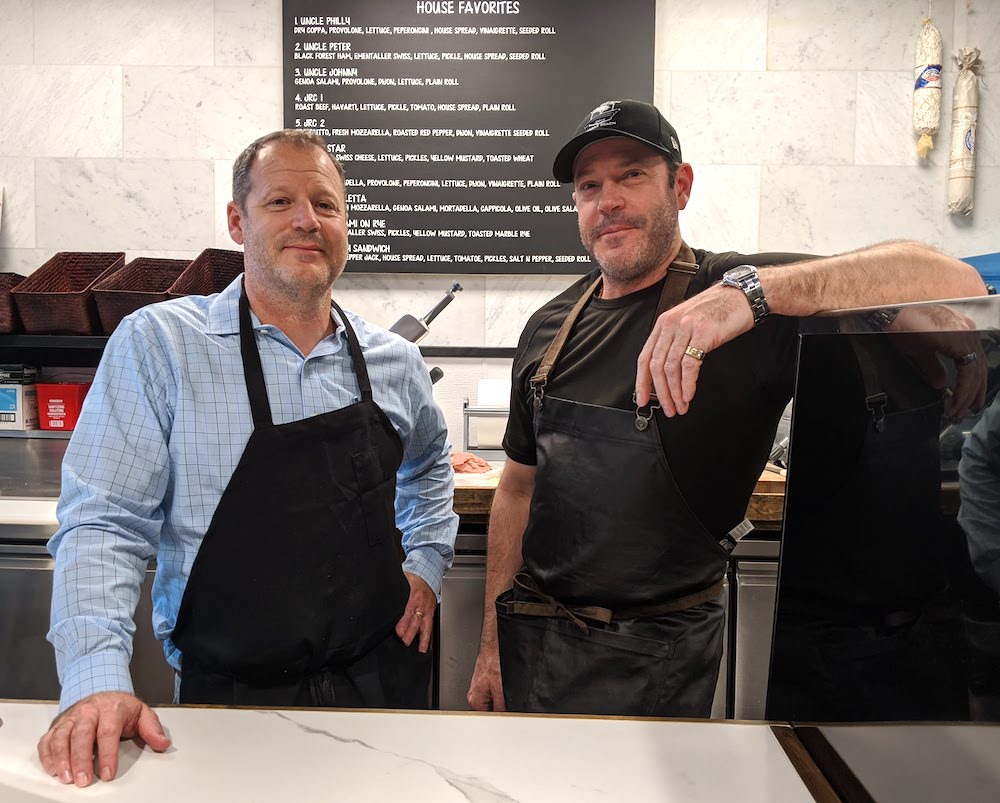 February 4, 2020 – On the shelves there are comely and colorful dry pastas and red sauces, jars of imported caponata, capers and olives, bottles of Italian sodas, California wines and organic olive oils.

But the real eye-catchers at Coniglio Brothers Deli, which opens on Wednesday, Feb. 5, are the sandwiches.

The brothers themselves appear at number 4 and number 5, the JRC 1 (roast beef-havarti) and JRC 2 (prosciutto-mozzarella), respectively.

Other favorites include a muffaletta, the Uncle Johnny (Genoa salami-provolone) and C Star (tuna salad-Swiss).

The JRCs are Jason and John Coniglio, the next generation of the family behind Mediterranean Market, a Carmel institution that closed in 2003.

“What we’re really trying to do is an homage to the original recipes,” John told Edible when plans for the new deli went public. “It has been impossible to get one of those Med Market sandwiches anywhere else.”

On Monday he led the deli’s team through how to assemble them, carefully feeding a huge round of Rovagnati pistachio mortadella through a humming Hobart slicer and peeling away tracing-paper-thin pieces for the staff to sample. From there he piled folds of shaved meat on the scale until a quarter pound weighed in with all its melt-in-your-mouth glory, pausing to discuss the merits of the right meat thickness, the importance of a biased cut on a quality salami and how to slice sourdough safely.

The pile of airy folds makes for a beautiful, even nostalgic sight, but only represents step one. John partially cored a Paris Bakery sourdough roll, then layered fresh tomato, fresh lettuce, freshly sliced cheese and a slathering of house spread the brothers hand-prepped beforehand. (Jason did mention that they’re in the final phases of deciding whether Palermo Bakery or Paris will do their breads, which they call the most important ingredient.)

The resulting sandwich is simple but precise, classic-to-the-point-of-predictability but oh-so-much-greater than the sum of its parts.

John watched closely as I tried one.

Hours will be 10am-6pm daily, until 8pm Sundays.

Everything is designed for grab-and-go, perhaps best enjoyed at a nearby beach or on one of the public decks at Monterey Bay Aquarium. Picnic combination baskets are also in the works.

In the meantime, please be patient as they get everyone trained and up to speed. Like Jason told his eager team Monday, “Soon this will all be muscle memory.”

After all, a made-to-order sandwich is worth the wait. So is seeing a community treasure find new life.