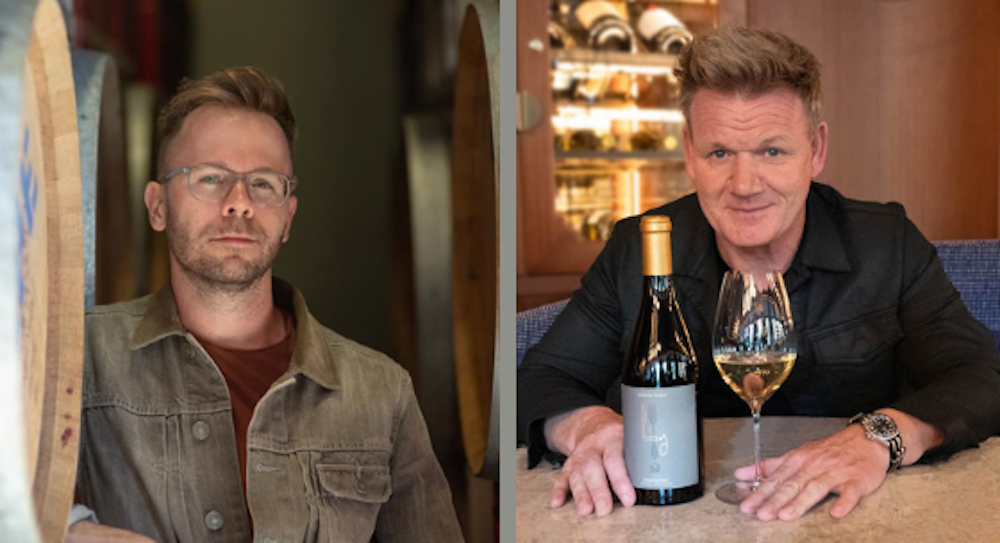 March 12, 2021 – Local pride is flying high as the announcement of celebrity chef Gordon Ramsay’s new wine brand hit the wires this week, made by none other than winemaker and Master Somm Chris Miller of Marina’s Seabold Cellars. Miller has been collaborating with Ramsay on this project since 2018 and is proud to be the producer of the line of eight wines under the Gordon Ramsay Signature Wine label, many sourced from Monterey vineyards. The case production is small, at just 2k cases for the first release.

Available exclusively from the online shop at GordonRamsay.wine, and at Ramsay’s U.S.-based restaurants, are:

Bottles can also be purchased in three seasonal shipments as part of The Ramsay Wine Club.

Behind the Miller/Ramsay collaboration was the desire on the part of chef Ramsay to craft old world-style wines that would complement the cuisine featured at his restaurants. Miller says the grapes are sourced from sustainable and organic-practicing vineyards, using minimal intervention winemaking, which he says include native yeast fermentations, no ‘adjustments,’ restrained use of oak, little-to-no fining or filtration, and minimal sulfur usage. The wines are 100% vegan.

Ramsay praised wines coming from maritime regions like the Central Coast for their balance, saying, “Passionate winemakers in California’s cooler climate regions are producing delicious, balanced wines, and my time in California has convinced me that Californian wines stand with the best in the world. Christopher Miller is a master of his craft, so working with him has been amazing. Wine is a complex marriage of art, science, and tradition all captured together in a glass, and I am very excited to join in that tradition with Gordon Ramsay Californian wines. Until now the wine has been served exclusively at my restaurants in Las Vegas and Tahoe, so I’m very excited it’s now available to anyone to enjoy with a delicious meal or on its own with friends and family.”

In an interview with Food & Wine magazine, Miller said, “It’s a little surreal for our humble little winery to be working with someone as prominent as Gordon. We’re excited to share these wines with both his fan base and wine enthusiasts alike. We hope the introduction of this project creates an opportunity for more people to experience or be introduced to California wines, and that it will yield a greater appreciation for the quality and diversity of the wines produced here.”

Miller is a foodie at heart who worked his way through college at Emeril’s and the Brennan family’s restaurants in New Orleans. The day after graduation, he moved across the country to study wine at Seattle’s legendary Canlis Restaurant, where he met Greg Harrington, MS, who had just founded Gramercy Cellars in Walla Walla. This would lay the foundation for Miller eventually becoming a winemaker himself, but not before working as wine director for Wolfgang Puck’s flagship restaurant, Spago Beverly Hills. While earning his Master Sommelier diploma, he spent harvests in Sta. Rita Hills, working and studying under Greg Brewer at Brewer-Clifton and Melville. After 20 years in restaurants, he finally transitioned to a life in the cellar, crafting the wines you will find at Seabold Cellars tasting room in Carmel Valley Village.

In honor of Women’s History Month, Nicole Walsh of Ser is featuring collaborations with women in the wine industry who are making waves, among them the gals at Maker, Sarah and Kendra, kindred spirits and wine lovers who met as classmates at Stanford Business School. They came up with the concept for premium wine in cool-looking cans, and launched Maker in 2018. Nicole met Kendra at a Soif tasting and one thing led to another, and pretty soon she found herself making a fabulous 2020 Rosé of Grenache from the Loma Del Rio Vineyard in Monterey, and a 2019 Wirz Vineyard Cabernet Pfeffer, both in adorable 250ml cans. You can purchase them, while supplies last, at the tasting room. They are $8 each and each can is the equivalent of 1/3 bottle of wine, but they’re infinitely lighter, easier to recycle and so convenient. Pick some up today!

Stockwell Cellars is now offering wine in refillable 750ml glass growlers. The bottles are $15 each and can be filled with one of four wines on tap for $20.