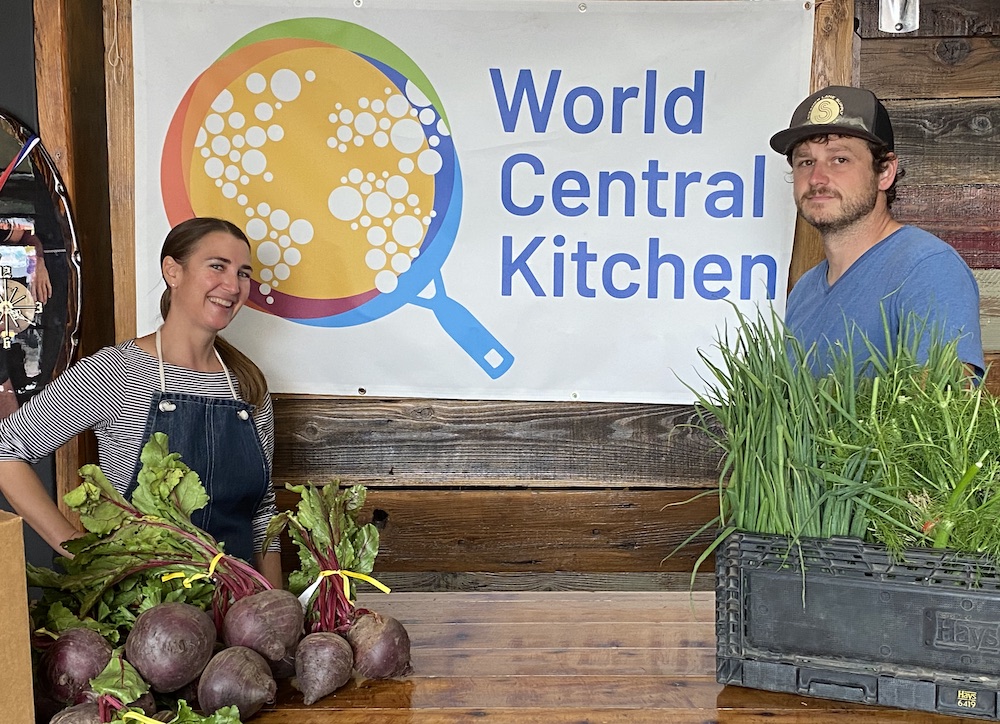 August 25, 2020 – As four terrifying wildfires ravaged our community over the past week, chefs, restaurants, farmers and grocery stores rushed to do what now comes naturally—feed the people in need.

The outpouring of support for firefighters and all those who had to flee their homes has been phenomenal. Most restaurants in the Monterey Bay area were forced to close for at least a few days—either due to being in an evacuation zone or because of heavy smoke and falling ash that made outdoor dining all but impossible.

Some chefs just started cooking and carted big trays of food to evacuation centers, others joined in a group effort in Santa Cruz County with World Central Kitchen, the charity founded by chef-humanitarian José Andres.

Katy Oursler of Mutari Chocolate learned through a family friend that World Central Kitchen (WCK) was sending staffers to the area to help feed first responders and evacuees and sprung into action, enlisting the help of local restaurants including: Soif, La Posta, Barceloneta, Kickin’ Chicken, the Picnic Basket and The Kitchen at Discretion.

“Everyone wants to help,” she told me Saturday as a constant stream of fresh organic produce arrived in the chocolate shop’s kitchen. “The really important thing to me is the opportunity to use produce that would normally be wasted due to the fire.”

Wild Roots Market, with two stores in the San Lorenzo Valley fire evacuation zone, immediately boxed up all its fresh produce and delivered it to Mutari—which became the initial launch point for the WCK operation.

Two dozen CSA boxes from Live Earth Farm arrived shortly afterwards thanks to Andrea Mollenauer of Food Lounge, who said people had not stopped by to pick them up due to the fires. Happy Girl Farm offered to send over all remaining produce following the Live Oak farmers’ market on Sunday.

Meantime friends and the folks from Kickin’ Chicken were turning the bounty into bacon, lettuce, tomato and avocado sandwiches, adding fresh basil and dill harvested that morning from the Homeless Garden Project and washed clean of soot and ash. Each restaurant was tasked with making 200 lunches or hot dinners. Workers from WCK helped, then made the deliveries.

Usually when World Central Kitchen arrives at a disaster scene, they prepare everything they need in a big institutional kitchen, but in Santa Cruz Oursler lined up small businesses that were happy to help. “When things get chaotic, the easiest thing to do is just throw things out, so I’m proud we’ve been able to keep food from being wasted,” she says.

Other restaurants jumped in to assist evacuees by offering free or discounted meals for evacuees, including Chocolate, Venus Spirits Kitchen, Avanti’s, Vim and more.

At the Santa Cruz County Fairgrounds—one of the main evacuation centers—chef Tabitha Stroup of Friend in Cheese Jam Co. headed out with plenty of meals, then Union Foodie Truck set up, serving up hot breakfasts with food donated by Shopper’s Corner market. There is no shortage of goodwill and hard work when it comes to our local food community!

On the ocean side of Highway One, Fogline Farm managed to avoid damage.

Swanton Berry Farm also reports its farm is safe, but that many workers lost their homes in the fire. A Go Fund Me campaign has been established to help them. You can donate here…

Nearby along Swanton Road, the homes of Jan Wilson and Carren Wilson—founders of Buttercup Cakes—were destroyed by the fire. The commercial kitchen they had just returned to after giving up their Pacific Ave. shop went up in flames. A Go Fund Me to help them rebuild has been started here…

The historic farmhouse at Pie Ranch, built in 1863 and used to house interns, burned to the ground, but most of the other buildings on the farm survived. “May this unexpected fire be the beginning of a transformation,” co-founder Nancy Vail posted on social media, vowing to bring back indigenous knowledge about managing lands through fire and living in harmony with the earth.