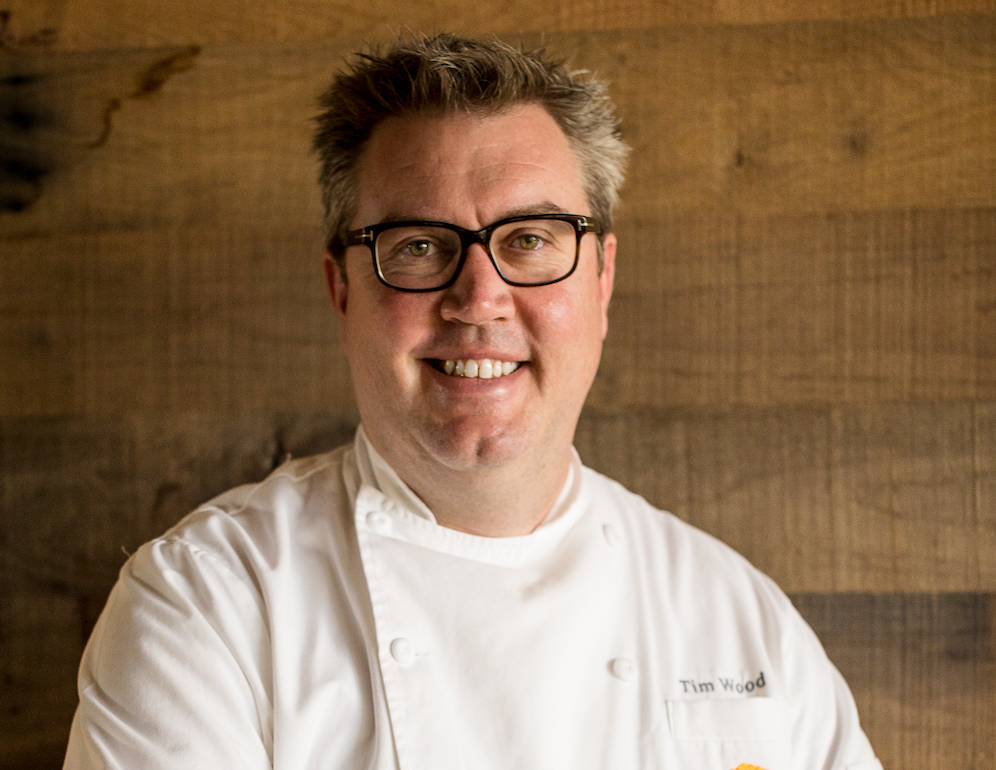 September 1, 2020 – As he was closing in on a dozen years at Carmel Valley Ranch, across an era that presented him with nine different general managers, chef Tim Wood was let go Friday, Aug. 28.

It was a decision that came as a surprise to many, including Wood, and one that came with a severance agreement. Wood declined to sign the deal. Termination negotiations are ongoing.

There are any number of reasons Wood was frequently voted the best chef in the area, but three stand out: his intuition for spotlighting great product in accessible dishes, his generosity with community events and—perhaps most memorably—his knack for hosting guests with humor and candor.

Cal Stamenov worked with Wood for years at Bernardus Lodge and knows him as well as any chef in the region.

“Tim’s a 100-percent positive individual,” Stamenov says. “He loves people, and he’s a people pleaser. Any time a member or a friend goes in there, once he spots them, he automatically brings something out personally. He just makes people feel really at home.”

Good point: It was always appreciated when he’d, say, ambush tables with a grater and start shaving truffles onto the plates.

But realistically none of the appreciation and accolades happen without a gargantuan work ethic and similarly large loyalty to his team. Even as he’s freshly unemployed he’s still touching base with his sous chefs to make sure they have all their sources and practices in place and aren’t overworking themselves.

“He works tremendously well under pressure; in a chaotic world he pulls it together,” Stamenov says. “Particularly in times like these, any hotel in this world would appreciate someone like a Tim Wood. That’s why his [layoff] makes no sense.”

“It just pisses me off what they’re doing over there,” Hammer says. “A new GM from out of town is here less than two months and knows everything. Tim was the glue for 10 years. People came because of him. The cuisine was always top-rate. He was always understaffed, but never complained. I don’t think the manager understands that without him none of what has made the restaurant program great happens.

“You can’t come into a small and connected community like Monterey and start acting like a corporate machine,” he adds. “Just that move will tell me I won’t be visiting.”

Managing director Peter McMahon did not respond to multiple requests to shed light on the layoff, but Los Angeles-based public relations firm Murphy O’Brien furnished this statement on behalf of Carmel Valley Ranch.

“Carmel Valley Ranch values Tim Wood, and we’re terribly sorry that the current situation required these actions,” it reads. “We were put in the position of making very difficult and painful decisions to address the unprecedented challenges presented by the COVID-19 pandemic, and this decision, like many others, is no way an indication that we do not appreciate his contributions to the guest experience at the resort. We also value Chef as a coworker and a friend to many of his colleagues at Carmel Valley Ranch.”

While the dismissal—and the current distress of an industry—aren’t the most fun news to discuss, it does furnish an opportunity to check in on Wood, the state of the industry and restaurants amid COVID.

What are some things that have emerged from the COVID crisis from where you’re standing?

For us it was night and day as far as people calling in sick. It started happening a lot more.

The COVID experience, in the beginning, showed locals were really understanding and totally appreciative of what we do. We have people who dine with us four or five times a week. It totally knocked them out of their rhythm. They were so happy to eat real food when we reopened. On top of that it helped bring people to understand how much they missed the human element. You can watch TV all day and eat out of a box, but it’s not the same as having a meal presented to you.

Also: I always thought my wife didn’t like to cook. All of a sudden she’s cooking three or four nights a week. Turns out she hates to shop! She can’t stand the supermarket. I love to walk the aisles and figure out what ingredients are cool. But with all the delivery options like Blue Apron she’s cooking all the time.

What are the best things that can emerge from the current crisis?

Sanitation. Healthy habits for restaurants and their employees. They’re forced to invest in gloves and masks. It turns out it might be a good idea to wear masks during flu season like in Asia. And disinfecting surfaces: We went from 1 percent wiping crumbs to spraying tables with cleaning agents. If you sit down and use a pepper mill, it should probably be wiped down. Any cross-utilized item should be disinfected.

Why do you think hospitality is such a part of your DNA?

When I talk to my mother twice a day, she asks what I had for lunch. And, “What’s for dinner?” We talk about marinara sauce. My father was a New York state forest ranger, but he loved to cook and always wanted to be a chef. I’m hardwired after growing up with good food he made, and learning to understand the different seasons. At first I thought my dad was cheap when he said he’s not buying tomatoes—but it was winter and he knew he wouldn’t like them.

At 13, I lied and said I was 14, and started washing dishes and prepping at a hotel. We could go swimming and boating on our break. We were like rich people—it was like Dirty Dancing—mixing with the guests. Sitting in the hot tub at the Ranch after yoga class 30 years later, here I am, doing it again.

But really, people who aren’t chefs, they might think about how we’re using our eyes, ears and nose, how we look, we touch, we smell, but it’s our heart that’s the one sense that is most important, and makes us feel most good.

It’s not my ego enjoying it. It’s me saying You cannot deny that you’re enjoying, because it’s f–king good. You can quote me on that.

When someone’s truly dedicated to cooking, it’s like the mafia—you’re totally invested in something because you believe in it. It’s your honor. It’s hard to have in this business. When you meet people who honor the food the way it should be, who honor Mother Nature, they are honoring other people who care about what they’re doing. That’s what makes the food taste good.

It’s easier to buy from one or two purveyors, and have everything arrive on one truck. It’s tough to have to call eight people to get the right fish, meat and vegetables.

How did you work with Hyatt Hotels [which assumed management of CVR in 2018] buying policies?

I took on the challenge of having to navigate new waters. It was a challenge and I met it and still got good ingredients. Where that goes now I don’t know.

When do you feel most alive in the job?

I’m most alive when the dining room is pumping and there are spot fires and I can step in and say, “I might’ve heard things weren’t right. I want to give you a treat.” Maybe it’s a nice scallop or a drink. We’ve all seen people freak out when it gets busy. I love it when our team can keep its head—and never let a good mistake go unnoticed. Learn from it.

When do I feel most alive? When people are having a good time.

What are some ways you envision this being a blessing?

It’s totally a blessing. God or Buddha or whoever is looking after us is saying to me, “You’ve done that for a long time, it’s your thing, but now you can do something new.” I could’ve been doing something similar to this 10 years from now. Now I’ll have another adventure. In this line of work it can feel like you can never take the time to breathe. I get a chance to relax and think about what makes me happy. I’ve been pushing hard to be the best, but unless you have a heart attack or a stroke slows you down, you don’t necessarily stop and assess. Something Is redirecting me to do something new. No matter what I do, it won’t be that job. It took me 47 years to realize, now it’s time for the next part of my life.

It happens as my priorities have shifted. What was so cool and important isn’t as much. It’s more about good food and good friends, not getting sponsored to fly to Spain and feel like a big shot. I don’t want to think big shot any more. I just want to live.

What are you proudest of at CVR?

Bringing together a one-of-a-kind experience that’s all the artisans. Jerry the fisherman, Swank Farms, [winemakers] Peter Figge and Ian Brand, the salt guy. Charlie Casio [who manages the goats and goat cheese]. Look at the website: It speaks for itself. That makes me feel justified walking with my head held high. No one else can say they did that. It was a unique thing.

Be careful if you lose your artisans. You can’t pay for passion.

How did you decide to assemble the on-property culinary program?

I wanted to share the bounty we had. You can buy the best fish and taste it. Why not meet the guy who’s catching it? How much fun is it to bring the Swanks to a party? It was me saying, “Hey, this is how you’re supposed to do it. Support these kind of people.” How cool is it to have chickens? Once you get a good fresh egg yolk, once you go gold you can’t go back. And why not cheese? We had the goats. Ultimately it was to share my goodies

What contributed to this layoff being a surprise?

It doesn’t make sense to me. But it’s not my decision. Ultimately someone’s in charge of making those decisions. I wasn’t part of that.

I might’ve played this pony too long. It was a complete surprise. I can still not comprehend it.

It’s heartbreaking but it’s a blessing. I said to my wife, “I don’t know what I’m going to do today.” She said, “Here’s some things you can get done.” Through all of this there should be a shout out to the spouses letting people like me carry on. It’s not easy to be married to someone who is so invested in their job. I don’t understand how she can be so supportive.

What parts of the human condition do chefs best epitomize, for better or for worse?

They look like they have a huge ego but many of them, they beat themselves up.

Some chefs do food that looks pretty but doesn’t taste good. It looks avant garde and looks different but the duck’s cold or undercooked. The best motives come from wanting to please people, not impress them. If you’re a snobby chef, you’re not a good chef.

Passion shows. If you care and you give an F then you’re a good chef. If you only care when you want to care, you just want to put the hat on.