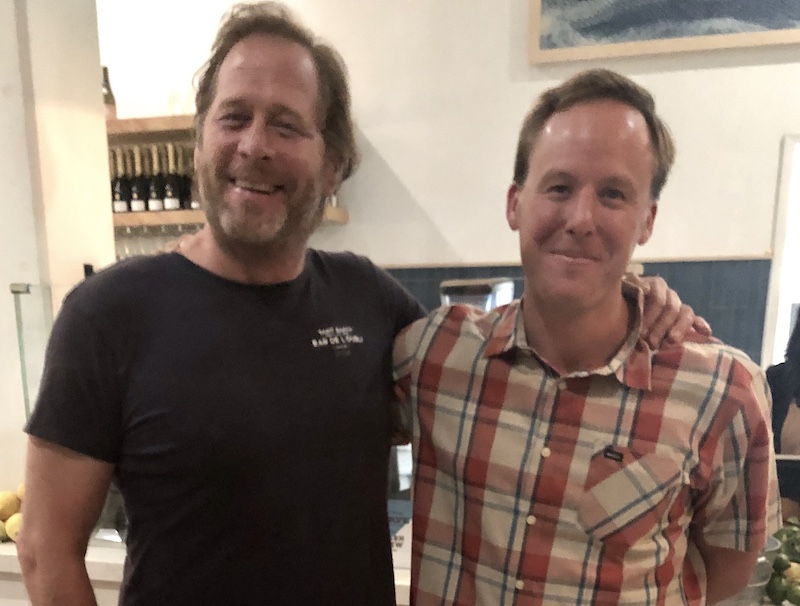 November 12, 2019 – The tables were set, the candles lit and the room crackled with anticipation as chef David Kinch offered a first taste of the Riviera-style cuisine he will serve at his highly-anticipated Mentone restaurant in Aptos.

The sneak peek—held at Manresa Bread’s all day café in Campbell last week—attracted friends and fans of the 3-Michelin starred chef, along with a smattering of folks from the local food world who, like me, were lucky enough to snag an invitation.

Mentone, currently nearing completion in the new Aptos Village complex, was expected to open this year, but it now appears an early 2020 debut is more likely, according to general manager Chris Sullivan, who is supervising the build out.

The name comes from the Italian spelling of the French Mediterranean town of Menton, which sits on the border with Italy. It is pronounced Men-tone-eh.

The cuisine is intended to reflect both the Italian and French sides of the border and will center around a rotating menu of five or six pasta dishes and five or six wood-fired pizzas.

Our preview—in a space with no pizza oven—still captured a bit of that mid-century glamour of the Cote d’Azur, think Bridget Bardot and Roger Vadim, along with homestyle dishes you might find at a family-run roadside restaurant in hills of Provence.

An Averna Spritz greeted us on arrival, combining the Sicilian amaro and a crisp sparkling wine from the Loire Valley into a red-carpet worthy aperitif.

The meal started with a charcuterie plate topped with puffy gnoccho frito, that provided a savory pillow for the cured meats.

We were then offered a small cup of “ciuppin” broth made with lobster and shrimp, and tasting like the sea itself.

The first course was a homely but flavorful slice of pissaladière, the classic provencal tart made with caramelized onions, anchovies and olives. It was served with a bright Cotes-de-Provence rose and made a perfect pairing to start the meal.

Probably the most eagerly awaited dish at our table was the pasta course that came next. The room filled with the delightful scent of fresh basil as bowls of Trenette al Pesto were served. Kinch and Mentone executive chef Matthew Bowden (former sous chef at Manresa) ground the pesto by hand in a mortar and added a touch of avocado, which resulted in a rich but lighter than usual pesto sauce that was just delicious.

The main course, Chicken Fricasse with olives and turnips served over mashed potatoes, was definitely something my grandmother would have recognized. But these talented chefs upgraded the traditional dish with a perfect jus and topping of smoked red peppers.

A croissant filled with hazelnut and chocolate ice cream completed the meal, making me feel like a kid on holiday at the beach. And I suppose that’s the vibe they are going for here.

Although the French and Italian wine pairings by Alyssa Twelker excelled and the breads and pastries by Avery Ruzicka were perfection, it’s clear that Kinch and company are trying to have some fun with the Mentone concept.

Wood-fired pizza is a staple on the Santa Cruz restaurant scene, but at first taste it seems Mentone will be something quite different. I can hardly wait to put on a pair of big white-rimmed sunglasses and waltz on in.