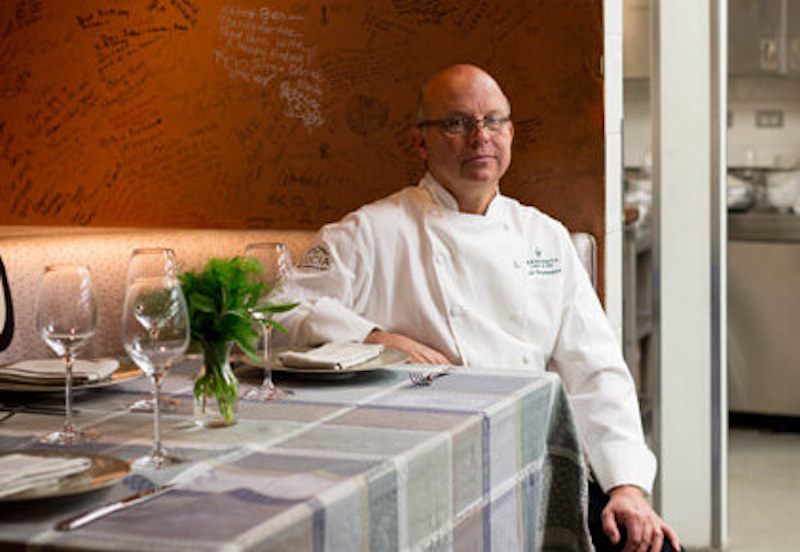 July 20, 2021 – Chef Cal Stamenov is moving on from Bernardus Lodge and Lucia Restaurant.

Those dozen words present major news for California food on their own, particularly in the Monterey Bay area and the Carmel Valley Stamenov calls home.

But to keep with the brevity theme, one way to sum up his impact on the region’s foodscape can be this: His legacy is impossible to measure.

Stamenov’s departure has been confirmed by Sean Damery, regional vice president for CVR Hotel Investors, parent company of Bernardus Lodge, who offers a thought many share: “We are excited to see what he does next.”

“It’s hard to sum up the entirety of Chef Cal’s contributions to Bernardus Lodge & Spa, our Peninsula and the industry over the last 22 years,” Damery says in a statement. “On behalf of our owners and the entire Bernardus team, we hope the community will respectfully join us in honoring his incredible legacy.”

“Cal worked with all those chefs and brought that experience to us,” Fink says. “When he arrived, he had such an incredible pedigree.”

Fink elaborates from there.

“To have a chef of his caliber cooking on the Monterey Peninsula for more than 20 years is just a legacy,” Fink says. “He created some of the most memorable meals of my life. That’s number one. Number two, great chefs attract other chefs—not only do talented people want to work with him and be in his kitchen, but other great chefs want to come and eat here.”

The farm-to-table movement was happening when he got to the Monterey Peninsula, but Stamenov, like every great chef, is product-driven.

“He has a long reach, and he has sources across the country,” Fink says, while pivoting toward a bigger picture perspective. “He’s not just a great human, he’s simply one of finest chefs to cook on the Monterey Bay.”

Stamenov came to Carmel after Masters of Food & Wine started at The Highlands, and as it morphed into Pebble Beach Food & Wine, he was a foundational piece at both events.

“He was an important reason why we even felt there was an opportunity to do Pebble Beach Food & Wine on the Peninsula,” says PBFW founder David Bernahl, who brainstormed the event while sipping wine on the Bernardus patios while Stamenov tested the would-be PBFW team on home-grown tastes. “I feel like he’s been the number one chef in this area over the test of time.

“Friends would ask me, ‘Is there good food in Monterey County?’ Cal Stamenov has been the thing that established that. He helped make it a place where foodies would go out of their way.”

Those events, while dramatic and massive on their own, represent a tiny fraction of the gatherings Stamenov contributed to in support of an army of nonprofits, chef-driven hangouts and everything in-between.

He has also mentored and nutured dozens of local chefs, who graduated from his kitchen to helm their own restaurants throughout the area.

Tanja Roos worked closely with Stamenov as a part of informing MEarth’s student garden-green kitchen by way of Bernadus’ Dinner in Vineyard, which served as an anchor for what funded the nonprofit’s work.

“It’s hard to imagine the local culinary scene without Cal and his being rooted in local purveyors and his own orchards,” she says.

Then she echoes a common theme. “He’s a hands-down incredible chef,” Roos says. “But more than anything he has a deep love for the soil, in the area and his own backyard, and what’s at the heart of what makes this area great.”

The orchard at his home in Carmel Valley offers a window into his world view. It covers two acres of organic fruits and vegetables, three bee boxes with domestic and wild Italian honey bees, 150 fruit trees and a cache of Plymouth, Barred Rock, Rhode Island, Speckled Sussex and Ameraucana chickens whose eggs make appearances on his menus.

As I’ve known Stamenov, his benevolent obsession with the freshest-of-fresh product only seems to gather greater momentum.

My favorite illustration of this came through a roving field trip into the watermelon patches of Swank Farms. EMB titled it “Chef Cal Finds His Melon Muse at Swank Farms,” but much like this piece, the short title can’t do his passion justice.

Reading back over the watermelon piece, it’s chef’s stoke for the fruit in the field that resonates most.

“Oh my God, it’s a watermelon patch,” he said. “Never in my whole life have I gotten to walk in one.”

We all aspire to retain what Buddhists call the beginner’s mind (Shoshin 初心), or at least I do.

Chef Cal is one of my guide posts that sync with that effort.

He shows more than he tells what applies to great food and good living: Stay curious. Stay activated. Stay fresh.

I’m among the many curious to see what he does from here.

Safe bet is that it’s going to be tasty and inspiring, in equal and overflowing amounts.