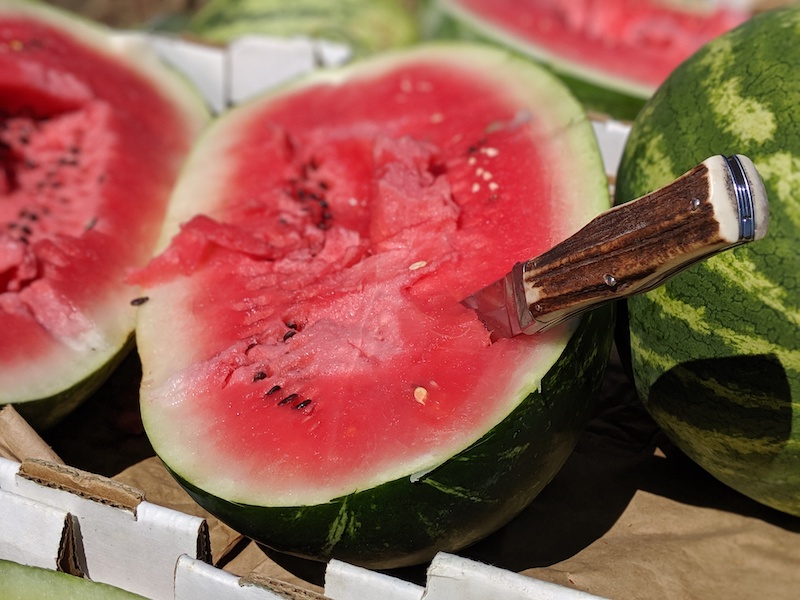 September 17, 2019 – Standing in a field soaked in sunshine, surrounded by buzzing bees and gorgeous green melons the size of rugby balls, Cal Stamenov breaks into a smile the size of a slice of watermelon.

The executive chef of Bernardus Lodge has dreamed of this moment for decades—since he was a fruit bandit running around his native Castro Valley at night, liberating apricots from his neighbors’ trees.

He mentions the dream on the drive east to Swank Farms in Hollister and reiterates it when we arrive.

“Oh my God it’s a watermelon patch,” he says. “Never in my whole life have I gotten to walk in one.”

The first stop on this melon mission happened on the other side of Swank Farms, which plays home to its popular Fall Festival from Sept. 21 to Oct. 21. Out there near Highway 156, a wealth of homespun fun awaits: a corn maze that covers vast acreage; a colorful bee garden; three tall metal dinosaurs; a massive mound of dirt that will be the new Slide Mountain; a chain of oil drums on wheels repainted and repurposed to be a popular “Cow Train.”

Still more stimuli come into play for the festival: a well-stocked pumpkin patch; petting zoos; pedal kart tracks; a giant “jumping pillow”; pig races; a chicken coop with a half dozen different breeds; bouncy houses; a sunflower field with an index of different strains. As the tone shifts from less spooky (past festivals have been aggressive on the gore) to more family-centric, bulbs will illuminate the corn labyrinth for a “Trail of Lights and Frights” starting Oct. 4. The Fall Festival has sold 3,000 presale tickets and is expected to welcome upwards of 15,000 people all told.

Adjacent to Slide Mountain, another major development is underway: All the lumber for a two-story, 6,000-square-foot barn venue is assembled, ready for permits to clear and building to start. It will eventually host weddings, meetings and other events. This diversification of revenue speaks to modern solutions that family-run farms look for; the Swanks estimate events already account for 25 percent of Swank income.

The greatest spectacle, though, has to be the corn stalks in all their leafy and towering glory. From the viewing platform the corn spreads like a sea of green, at once welcoming and able to arouse fear that “He Who Walks Behind the Rows” might suddenly emerge. From the interior of its labyrinth, the disorienting effect is real.

Next we drive over to the watermelons, where a picnic table covered with melons and heirloom tomatoes sits ready. With Dick Swank as our gregarious guide, we fan out into the field, thumping watermelons and hoping to hear (and feel) a low vibration in response.

“The biggest deal for me today is the tapping,” says Stamenov.

Later he reflects on what he learned, acknowledging it’s an elusive art. “You want to feel more of a thump than a thud. More density is what Dick and I figured out—if it sounds too hollow, it tends to be overripe,” he says. “But there’s no science to it.”

Soon we’re using Stamenov’s Czech-made Mikov switchblade to slice out the very best flesh at the heart of the melons. The bites are so juicy they splash juice in every direction. Dripping is unavoidable. The dirt floor doesn’t mind.

Swank cracks open a crisp and sweet Ultra Cool hybrid watermelon bred for this side the Santa Clara Valley; a yummy Sangria seeded watermelon; and a seedless Yellow Buttercup melon with electric yellow insides, less acidity and a soft vegetal flavor. The Santa Claus watermelon isn’t quite ripe enough, so it gets a pass. Same for the orange-fleshed honeydew.

Then a so-called sugar cube cantaloupe, no bigger than a softball, threatens to steal the show. If Stamenov’s dream is to prowl a watermelon patch, mine is suddenly to try this with prosciutto, mint, and a port sorbet in a hollowed out cantaloupe rind—one way Stamenov likes to prepare it at Bernardus.

Stamenov is currently scheming ways to channel his love of melons for Bernardus’s 20th anniversary celebration, which happens at the lodge on Carmel Valley Road 1-3pm Sunday, Oct. 27. The menu is in the works, but he’s picturing treats like watermelon-Sauvignon Blanc popsicles and compressed watermelon carpaccio piled with olives, feta, arugula, heirloom tomatoes, balsamic and micro greens. A cantaloupe-and-prosciutto plate is part of the plan.

Back at Swank Farm, we taste test the watermelons against representatives from Modesto and Los Banos, though that feels unfair when the home team is this fresh. As we munch, Swank shares little watermelon wonders that make the fruit that much more magic.

Among them: When watermelons get overripe they can develop what are called “hollow hearts,” elegant opening at its center that look like the curving F-holes of a violin.

Bonus note: The rinds contain an aphrodisiac some compare to Viagra, though Swank adds a caveat, “You may have to eat a thousand watermelons to get the desired reaction.”

But a watermelon mystery lurks. “How can there be a seedless watermelon?” I ask. “I mean, how do you plant?”

Swank chuckles, talks about the genetics, and decides he’s going to deliver us to the scientist who first explained it to him.

A couple miles away Italian-born Dr. Remo Lundergnani stands in another watermelon patch with his colleague Dr. Sanjay Dwivedi, head of Orbin Seed International of Bangalore, India. This field-lab is loaded with even more exotic melon shapes and shades and striping patterns. A number are tagged with acronyms and numbers to indicate they’ve been successfully self-pollinated or crossbred to create a better organic fruit as part of upstart Organic Bio Corp’s plan to produce the toughest and tastiest breeds of watermelons.

Lundergnani—who says he’s been traveling the world breeding produce across “55 years of enjoyment”—points out Crimson Sweet watermelons, Charleston Gray watermelons and Yellow Canary watermelons, then melons first sown in spots ranging from Central America to Brazil to the Middle East.

Stamenov looks over the field and offers this: “If I lived near here as a kid, these guys would’ve hated me.”

Charismatic watermelon whisperer Lundergnani, who seems to speak in the same ALL CAPS he emails with—tells us watermelons appear all the way back in ancient Egyptian times. In fact, scientists were able to germinate watermelon seeds found in a mummy’s tomb, ready to accompany royalty on the road into their next lives.

The seedless melons, he reports, are achieved by breeding two types of watermelons with disparate amounts of genetic material (diploid and tetraploid lines), creating triploid offspring. He equates it to a donkey and a horse being able to birth a mule that can’t successfully reproduce. Sterile, but functional.

“There are humans who cannot have babies too,” he says. “The father or the mother have a son or daughter that has three-chain [or triploid] DNA.”

I didn’t dream I’d learn so much about sterility, or about the juicy summer luxury that, for Swank, came into its own last year, when Stamenov told him they were ready for their sweet-and-crisp closeup.

They’re also a crop Swank finds a nightmare to cultivate.

“They’re the easiest to screw up, in many different ways,” he says, “and the easiest way to do it is to pick at the wrong time.”

Fortunately we’ve picked a good time to tap into—thump into?—how to do it. It seems worth celebrating with a slice. Or with two blockbuster events based on seasonality, slices included.

Either way, as Stamenov readies for Bernardus’ 20th, his heart remains in the Swank fields.

Learn more about the Swank Farms Fall Festival at www.swankfarms.com, and more on the 20th Anniversary Craftsman’s Celebration at www.bernarduslodge.com.