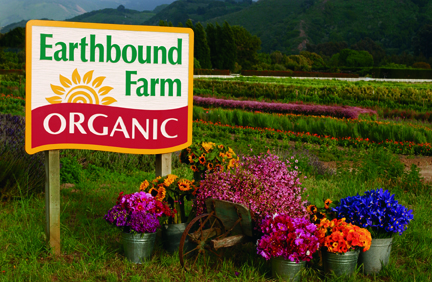 with EMB’s next Pop-Up Supper Club on July 14th Join Earthbound Farm founders Drew and Myra Goodman and your friends from Edible Monterey Bay for an all-organic gourmet dinner on their farm in Carmel Valley on Saturday, July 14th. The event will celebrate the 20th anniversary of Earthbound Farm’s Farm Stand and at the same time benefit Ag Against Hunger, a project that collects surplus produce to feed needy people in our area.

Bernardus Winery and Heller Estate Organic Vineyards will be pouring wines that they have generously donated for the event.

“Drew and I started Earthbound Farm 28 years ago just down the road from the farm stand, with a 2 1/2 acre heirloom raspberry farm and a roadside stand,” explains Myra. “When we moved our operation to Watsonville in 1992, I opened the current farm stand to maintain a connection with the local community. This dinner is our one official celebration of the 20th anniversary of the stand.”

The dinner begins at 6pm with a glass of wine and a guided stroll around the farm. Garden-fresh appetizers will be served out in the field, including chilled curried carrot and coconut milk soup, gardener’s grilled pizza, cucumber cups filled with herbed goat cheese and BLT bites.

When you hear the clang of the dinner bell it will be time to make your way to the long tables, where the Goodmans will tell stories about the history of the Farm Stand and their longtime involvement with Ag Against Hunger.

As the country’s largest grower of organic greens and vegetables, it is not surprising that Earthbound Farm’s Executive Chef Sarah LaCasse is preparing a menu that includes four knock-out salads. Without giving away all the secrets, we’ll just remind you that it is berry season so one will feature strawberries and another will contain raspberries, while a third has fresh-picked green beans and multi-colored potatoes with kalamata olives and heirloom tomatoes.

For the main course you will feast on roast chicken with smoked tomato and basil butter on a bed of faro with tomatoes and olives, as well as fennel rubbed pork tenderloin with grilled figs.

After dinner it’s back into the fields, where guests will be encouraged to pick berries for the miniature shortcakes planned as one of the four desserts. You can’t get much fresher than that! Other sweets include mixed berry crisp with Alden’s vanilla ice cream, raspberry brown butter tarts and strawberry jam bars.

“At our farm stand, we want to offer people the delight we felt when we first came to Carmel Valley and discovered the beauty and wonders of growing organically. Pulling a ripe berry off of the vine, brushing up against the basil, being surrounded by fruiting trees and beautiful flowers,” Myra says. “That’s why we’re not just serving our guests an incredible spread of all certified organic food, we are also including strolls through our gardens and having guests pick berries for their dessert from the same bushes that launched us almost three decades ago.”

The Goodmans began farming organically in Carmel Valley back in 1984 and pioneered the sale of pre-washed, packaged salad greens. Myra has written several acclaimed cookbooks—all starring organic produce. The kitchen at their farm stand was one of the first in the nation to be certified organic.

The company is now based in San Juan Bautista, and is committed to bringing delicious and healthy organic products to people across the United States.

Ag Against Hunger, which will have an information table at the dinner, began in Watsonville in 1992. Tim Driscoll, of the strawberry growing family, knew that about 20% of each harvest was wasted so he joined forces with Second Harvest Food Bank and the Farm Bureau to begin gleaning Central Coast fields to feed people in need in Santa Cruz, Monterey and San Benito counties.

Earthbound Farm has been supporting Ag Against Hunger since 2002 and over the past five years it has donated 1.8 million pounds of organic produce—approximately 9 million servings. In addition, Earthbound employees regularly volunteer their free time for weekend gleanings.

“We love Ag Against Hunger because they collect produce that would otherwise become waste for us and distribute it to hungry people who generally wouldn’t have much access to healthy, fresh organic produce,” says Myra. “It’s such a win-win for everyone and they are really an outstanding charity.”

There are only 40 tickets available for this very special Edible Monterey Bay Pop-Up Supper Club, so reserve soon as it is sure to sell out. Buy your tickets online for $95 per person by clicking on the Pay Pal button below.