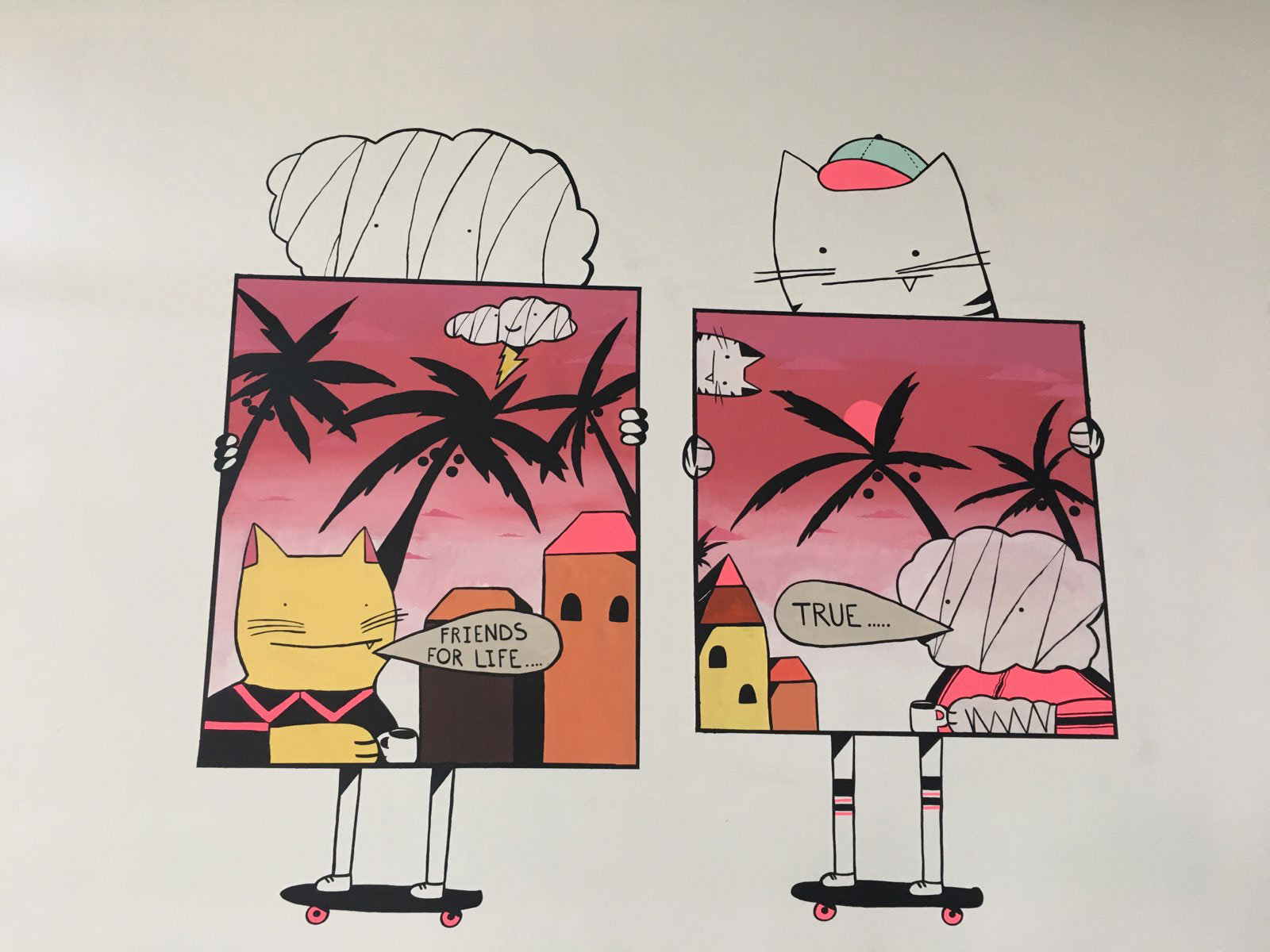 May 28, 2019 – A young farmer went into Cat & Cloud coffee company in Santa Cruz the other day looking for a Caterpillar 320 GC Medium Excavator with 90.0 kW net flyweight power.

He was furious to find out that Cat & Cloud doesn’t sell the 320—or the any of the backhoe loaders he wants.

Turns out they only sell things like lattés, coffee subscriptions and some apparel featuring felines and condensed water vapors.

Just kidding: No farmer went in Cat & Cloud seeking an excavator or a backhoe.

That’s the primary reason why outcry is so fierce as locals learn Caterpillar is coming after the cult coffee phenomenon Cat & Cloud for trademark infringement.

The suit was filed by the law firm Finnegan, Henderson, Farabow, Garrett & Dunner out of Washington DC, on behalf of Caterpillar Inc., which made $54.7 billion in revenue last year. It uses CAT as its ticker symbol on the New York Stock Exchange, and in marketing materials for products like CAT Lift Trucks and heavy duty stuff including alloy-toe boots and “flame-resistant work wear.”

“Petitioner [Caterpillar] asserts that a generic consumer would not associate the word ‘cat’ exclusively with [Caterpillar], and a person who states ‘I am going to get a cat’ would be taken to refer to a domesticated animal, and not [Caterpillar] specifically,” the Cat & Cloud reply reads. “Further, while the mark CAT used in connection with heavy equipment sold by Caterpillar (itself, a common English word for an insect) may be well-known to a small segment of the population in the heavy construction industry, there are hundreds and hundreds of existing Principal Register marks for a plethora of various goods and services.”

The founders of Cat & Cloud seem to be as baffled by the beef as their following, and they took to the same podcast that helped Kickstarter the brick-and-mortar C & C spots in the beginning to discuss it.

Jack added this: ”A company like Caterpillar, with billions of dollars in revenue, could have such a positive impact in the world, and make a real difference if it wanted to. So to me it’s just sad to see them wasting their time and money on this frivolous lawsuit instead of spending it to invest in their employees and their community.”

“Our vision is to change the way people do business. That’s another reason we have to fight for this, for us,” he says. “I don’t want to be the example of [someone] who rolled over for a bully stealing your lunch money. We have to find a way to fight for what’s a big part of our culture and company. It bums me out that people on the other side are trying to ruin people’s dreams.”

He may be getting at the fact that this is happening while Cat & Cloud is a sturdy example of how karmic practices are good for business. Sure, it’s a super Santa Cruz crunchy angle to take, but it’s great across all sides of the tricky work-service spectrum. The operating principle for the company, which is partly employee-owned: It’s not about coffee so much as it is about their coda—“Leave people happier than you found them.”

When pressed to identify how C&C backs up a lofty assertion like that, co-founder Jared Truby is quick to answer.

“It’s real easy,” Truby says. “It starts with our retention—less than 5 percent turnover since our founding—and worldwide support, consistently [having] people saying we inspire them, and that how we run business inspires them to do better and get into business.”

“Old-world thinking says you’re not going succeed this way, and we’re not going to subscribe to fitting into any of these boxes. With enough amazing people there’s nothing you can’t achieve, if you’re willing to spread the love, go together and you go further. It is pretty real to us,” he adds.

Edible Monterey Bay’s email to Caterpillar’s legal representation requesting comment went without a response, so we’re left with what they posted on Instagram:

Caterpillar serves customers around the world, many of whom earn their livelihood with one or two machines and often a good pair of work boots. We value all of them and strive to provide exceptional products and services. This means we have a responsibility to protect and maintain the brand they love and rely on every day – including our existing trademarks.

We are not suing Cat & Cloud, not targeting a small business and not focused on Cat & Cloud’s primary interest: coffee. We’ve simply asked the U.S. Trademark Office to remove Cat & Cloud’s trademark registration on footwear and apparel only, products for which Caterpillar has longstanding trademarks and a considerable business. We hope to resolve this issue quickly.

I had a lot more fun reading the responses from the C&C faithful on Instagram than Caterpillar’s take. Here appear my favorites:

jahabeebs How do your asphalt pavers compare to regular [coffee grounds] tampers? I’m trying to reduce my espresso channeling. By the way, have you ever tried Cat & Cloud’s espresso?

jack.harry What is this? I thought this was those guys who sell coffee??! Machines? I only care about espresso machines

cuteandlanky CAN I GET A LATTE PLZ

Supporters like these launched a petition last Friday on Change.org called “Tell Caterpillar Inc. to Stop Bullying Cat & Cloud and Other Small Businesses.” At the time this published, they already had well over 10,000 signatures.