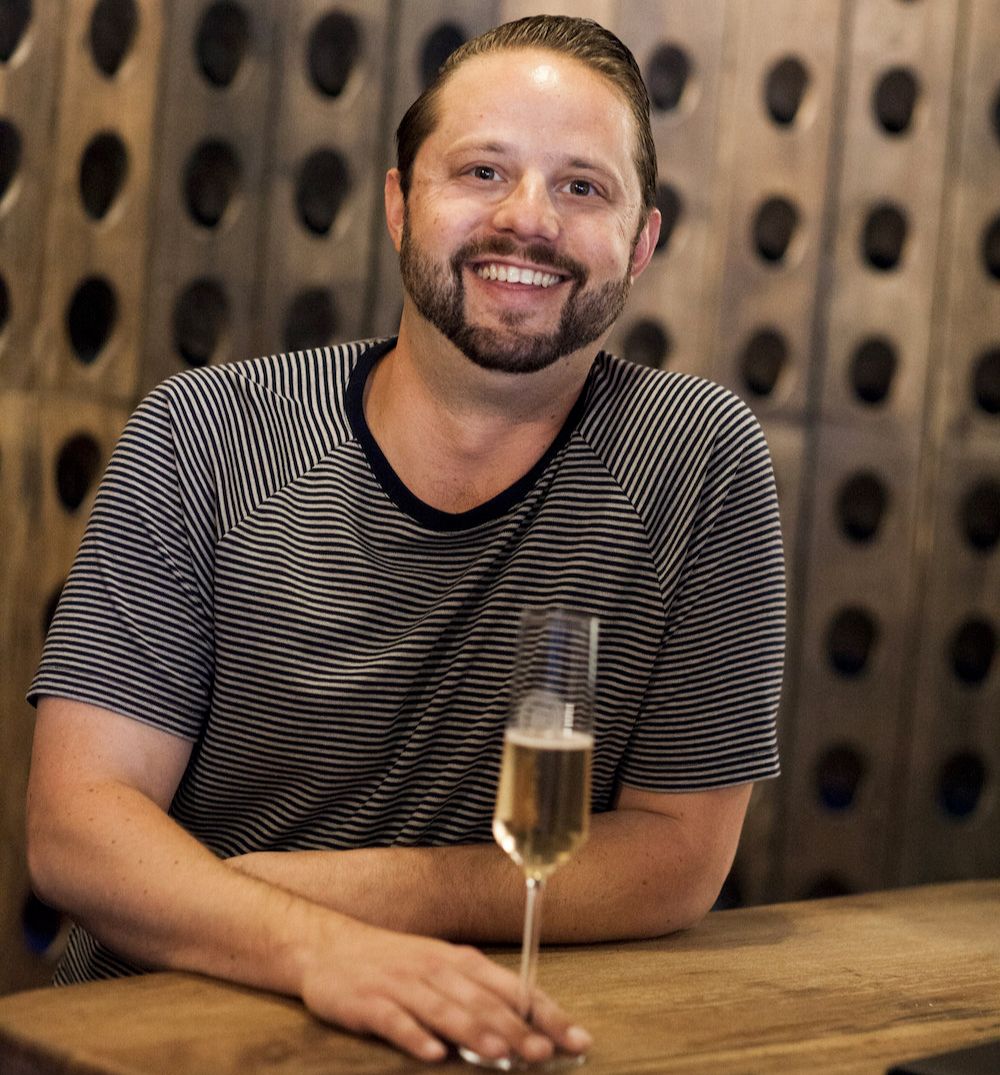 June 4, 2019 – As he popped the cork on his latest releases—the 2013 Caraccioli Brut Rosé and the 2013 Cuvée Brut—winegrower Scott Caraccioli expressed pride in these particular bottlings, which incorporate estate fruit from his family’s Escolle Vineyard for the first time.

“I feel this is the most balanced and perfectly composed vintage, with a mid-palate richness right out of the gate,” he says.

He explains that the Brut Rosé was released in the fall of 2018, as the red wine adds a sweetness that helps carry it to an earlier maturity, whereas the Brut really needs time after the dosage is added.

Caraccioli feels extremely fortunate to have apprenticed under the late Michel Salgues, a Frenchman who worked at the famed Roederer house of sparkling wine for nearly 19 years in Anderson Valley before taking on the Caraccioli project in 2007.

Salgues took the classic French approach to Méthode Champenoise, with some modern twists. According to French law, Champagne Houses in France must use the first 150 gallons of juice extracted from each ton: however, Caraccioli Cellars decided to use only the first 120 gallons per ton, providing the best ‘heart’ juice from each grape, giving the wines an extra purity of expression.

Secondary fermentations carry on for another four years, with a final year of aging on the cork before release. Says Caraccioli, “There are no shortcuts in making sparkling wine. Michel taught me patience is a virtue. Time on the cork is absolutely essential. We did the tirage (removing the yeast from each bottle) on the 2013s in 2018. This was the first time I worked on the wines by myself after Michel passed away in October of 2017.”

Caraccioli spent a lot of time with Salgues blending sparkling wines between 2013 and 2017. “Bubbles are difficult from a blending standpoint,” he says. “Assembling a cuvee requires building complexity. You have to know what’s going on with all the cellar lots and taste them constantly.”

When Salgues was diagnosed with cancer and had to undergo chemotherapy, which is known to alter your ability to taste, it was time for Scott to step up to the plate and take charge. “In 2016, we made a Blanc de Blancs, which is only the second time we ever did this. Michel told me to trust my palate. We had a lot of dialogue about our next steps. He told me, ‘Don’t make concessions. You don’t cut corners. The path of most resistance is the right path for sparkling!’”

Caraccioli reflects back on his initial involvement in the winery. “I learned so much patience from my father and uncle and Michel. And faith. “He made vintages 2006, 2007 and 2008 before we had ever tasted a bottle! In 2011, we launched our tasting room, with four vintages in glass.”

Historically, their Brut cuvée is 60% Chardonnay and 40% Pinot Noir, reflecting the composition of the Escolle vineyard, which was planted specifically for making classic Méthode Champenoise wines. But each year dictates what can logically be made, based on yield and acid levels.

In 2017, for example, they made both a Blanc de Blancs and Blanc de Noirs, but in 2018, the Chardonnay did not have sufficient acid to make a BdB. But it was a good year for Pinot, so they made a BdN. And still Pinot Noir as well.

Caraccioli has been slowly figuring out the estate vineyard, which they have been using exclusively for their bottlings since of 2015, after years of sourcing from Hahn and Talbott. Initially Escolle was exclusively Chardonnay and Pinot Noir for sparkling, but Caraccioli’s been tinkering with the clones to achieve both brighter sparkling and more concentrated still Pinots. For instance, he added more clone 943 to the top of the vineyard, where the vines are cane-pruned, low yielding and have very small berries. Although not used for sparkling, it adds intensity to the still Pinot Noir. He’s also pondering block specific sparklings.

And there is also his new love, Syrah. He has both Alban clone 1 and the Power Block clone. “I think I can grow good Syrah here. It’s perfect for cool climate, low alcohol, expressive red wines,” he says.

But back to the sparklings. The 2013 Brut Cuvée is beautifully focused, with apple quince, lemon and pear. Picked at 19 Brix, which Caraccioli deems has the ideal acid level, it undergoes ML and then rests four years on the lees. The fruit intensity and transparency is a pure expression of SLH.

The 2013 Brut Rosé is super smooth, with aromas of rose petals and lilacs, and flavors of strawberry and raspberry mousse: an approachable charmer.

Says Caraccioli, “You only get one chance per year to make great wine, so you have to nail all the picks. When we are blending, we have more lots in the cellar to pick from. We default on the side of elegance as we build complexity.”

There’s a bit of 2009 Brut Cuvée left, for those who want to experience the joys of a sparkling with ten years of age on it. Picked earlier, with a lot more malic acid in play, this delivers aromas of green fig and apple, and its incredible mousse is streaked with blood orange, great depth and a nuttiness accentuated by dried citron and dried apple. “This is Michel’s wine. I didn’t have anything to do with it, except to save a half pallet of it!” he says. Snag some if you can.

However, don’t miss the outstanding 2016 still wines on the menu right now. As lively as it is lovely, the 2018 Rosé of Pinot is the color every lover of Provence-style rosés looks for, with its pale pink and salmon blush. Floral aromas combine with sweet tangerine, summer white peach, and strawberry, with most also appearing on the palate, along with watermelon, kiwi and distinctive salinity, ending with a powerful finish of deft acid and a flourish of fruit.

The 2016 Chardonnay is a showstopper, oozing stonefruit aromas—think peach cobbler—and just hinting at tropical. On the palate, it’s laden with ripe yellow peach and Comice pear, with a distinctive limestone core that adds salinity to the warm vanilla bean custard edge. The acid is lively and mouthwatering from start to finish.

The 2016 Pinot Noir makes merry with whiffs of strawberry, cedar, fresh earth and a hint of pepper, while the palate is pure boysenberry pie, black cherry and huckleberry, leading to a finely tuned, creamy dreamy harmonic finish.

Finally, there’s the 2016 El Bec Pinot Noir, made from clone 943 in honor of Scott’s Uncle. Enticing with its beautiful deep garnet hue and aromatics of pomegranate and heather, this would makes a fine Father’s Day gift to anyone who appreciates a bold, statement wine that holds its head high and proud, like the handsome ram depicted in gold leaf on the bottle.