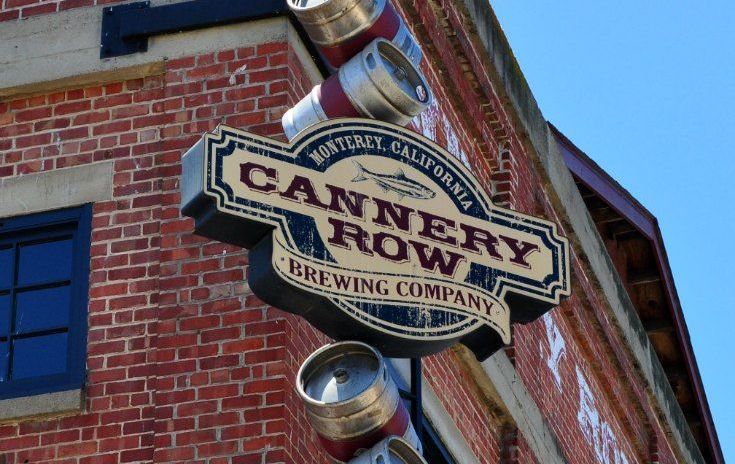 The enthusiasm was understandable, as CRBC tapped into something Monterey—and Northern California—hadn’t tasted previously. Seventy-five craft beers on tap was the most in any one place between Los Angeles and Oregon. The venue was historic and modern, classic but contemporary, with historic brick walls, shiny penny flooring and steampunk fixtures. The food, from the likes of founding chef Mark Ayers, longtime executive chef Daniel Furey, and local favorites Michelle Lee and Justin Robarge, was equal parts upscale execution and bar-friendly comfort.

Veteran Monterey-based food writer Raúl Nava—who cites the “bigger-than-your-face” pretzel, sticky sweet Hawaiian huli huli chicken, and decadent butter-ground burgers as some of his favorite dishes—believes it did nothing less than change the area’s epicurean landscape.

“Cannery Row Brewing Company—alongside sister spot Restaurant 1833 and Carmel hotspots La Bicyclette, Cantinetta Luca and Mundaka—ushered in a new era of dining on the Central Coast,” he says. “Together, they livened up a sleepy restaurant scene, riding trending tastes from big cities to welcome a new generation of diners.”

CRBC also helped set the table for stylish brewery-eatery operations that have come in its wake, including Alvarado Street Brewery & Grill, Yeast of Eden and, most recently, partnerships between Dust Bowl Brewing and Wedo’s Tacos and Other Brother Beer Co. and Ad Astra Bread Co. Ironically enough, their competitive presence contributed to CRBC’s demise.

“It’s a different time today than 10 years ago,” says CRBC founder David Bernahl. “Then we were only thing of its kind in the area. Now there are a gazillion people doing cool things with microbrews.”

There are plenty of other causes at work, including an expiring lease, the expensive and ongoing saga of getting an elevator up to ADA standards and needed kitchen repairs.

“Hey guys…sorry we are closed for a moment,” reads the CRBC announcement on Facebook.  “We are working on getting ourselves open again! It’s been a rocking 10 years…We are looking to the next 10 years and the meaningful (ahem) investment it takes to do that the right way.”

Bernahl, who runs CRBC parent company Coastal Luxury Management, concedes a lot of things would have to go well for CRBC to reopen, but adds that it’s not impossible.

“If we can find a solution, we’ll reopen,” he says. “There are a lot of conversations going on. Maybe it’s time for something new to be there.”

Dorothy Maras has followed the Monterey Bay food scene closely for years, as a general manager for destinations including The Old Bath House, as a food critic, and as the primary chef coordinator for CLM’s Pebble Beach Food & Wine and Los Angeles Food & Wine. When Edible asked her for comment she started by replying, “I’ve given this a great deal of thought because it deserves it.”

She continued at length. “Eventually a restaurant becomes a small part of the heartbeat and identity of where it exists. Not to sound super sappy, but truly it is a living, breathing entity that started as a spark in someone’s eyes,” she wrote via email. “Cannery Row Brewing Company was on the leading edge of the enormous popularity of craft beers. It brought a younger, hipper vibe to Cannery Row, a place that sorely needed something fresh and lively…it didn’t just tip-toe into the market, it swung hard for the fences and occasionally fell short, like any business does.”

She also added some perspective on restaurants as a whole and CRBC in particular.

“We celebrate the opening of a restaurant like having a new baby; we lament the closing of a restaurant as if something near and dear to us has succumbed to death,” she wrote. “But, what we fail to do is look at all of the struggle, strife and sacrifice that is made by many to keep it breathing in between the beginning and the end. That is where the nuts and bolts of the business-of-the-business takes place. Difficult decisions are made for the good of all concerned.

“Right now CRBC needs a bit of time and space to be introspective and really take an objective look at what the future holds and what is best for all concerned. It is a big responsibility that is not, and cannot, be taken lightly.”

Nava puts the closure in a wider context of Coastal Luxury Management, which at one point ran Restaurant 1833, Faith & Flower in Los Angeles and Rose.Rabbit.Lie in Las Vegas, on top of CRBC.

“CLM burned brightly with an ambitious vision for luxury dining, but such ambition appears to have proven fatal in the face of a changing dining landscape that favors casual comfort over indulgence,” he says. “As CRBC’s star burns out, we’ll always have the memories of the taste trendsetters that helped put Monterey dining back on the map.”