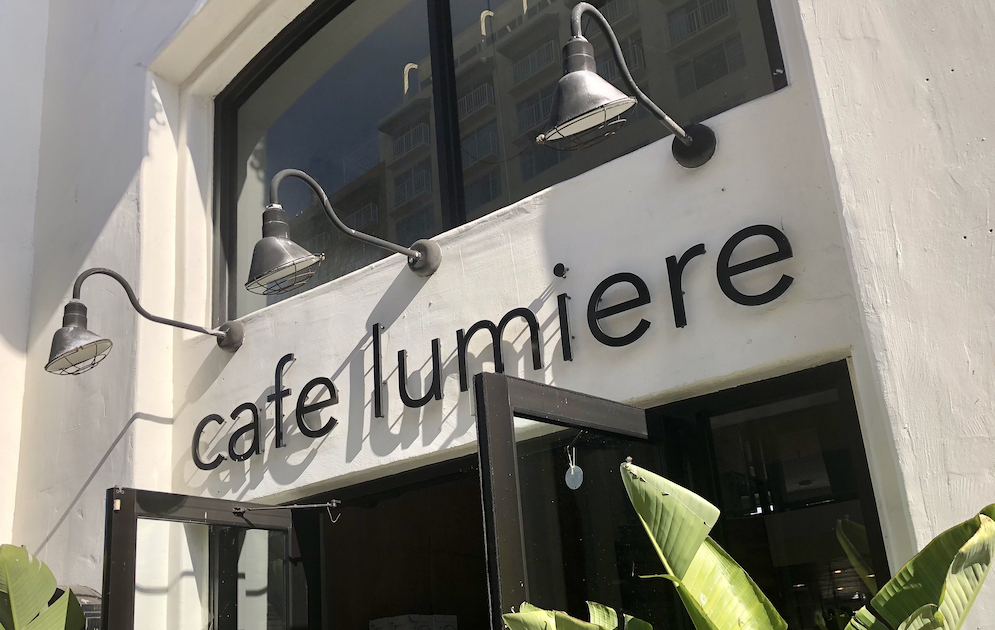 November 3, 2020 – For many cafes, the ultimate goal is to reach “third place” status, a Friends’ Central Perk existence wherein it becomes an anchor of life beyond home and work.

Cafe Lumiere did that, and then some, which makes its loss particularly painful in troubling times.

Few details are available on what directly triggered the closure—and longtime owner-operator Brandi Lamb has declined interviews—but historically the lease has been linked to the viability of Osio Cinemas. The cinema was closed for shelter-in-place in March; a formal announcement of Osio’s closure followed Lumiere’s Oct. 31 message on Nov. 1. Lamb did announce the cafe will be open through Nov. 8, which has inspired a lot of pilgrimage by loyal patrons, aka “Lumieries.”

Osio survived bankruptcy in 2015 with the help of a robust Kickstarter campaign and later became Osio Theater, before transforming into a nonprofit to help it survive with Lamb serving as its executive director. Its impressive curating of independent, foreign and international films made it a treasure rarely experienced in communities of Monterey’s scale.

My colleague and friend, travel author and journalist Stuart Thornton, is one of many who loved Osio—and made Lumiere his office for its alchemy of great coffee, welcoming spaces upstairs and down, first-name-familiarity, surprisingly creative food and a character-rich service team.

“The baristas were masters of the craft, and I enjoyed how they mess with you in a playful way,” he says. “When [manager] Tanina Oglesby likes you, it’s a good feeling—but you have to earn it.”

Brandon Stettenbenz worked at Osio for half a decade and a short span at the cafe. He too flags the staff’s unique vibe. “Sometimes you’d get rude service, but it was endearing and certainly honest service: They weren’t scared of a negative Yelp review,” he says. “They believe in their own identity.”

He also marvels at the collection of people he encountered hanging out. “Coming back to visit yesterday I kept having flashbacks of how many people I’ve met and have affected me long term in my life, how much I learned there,” he says. “It was pretty special. There was something about it.”

One of its true coups: a food program led by chef Cirilo Aragon that felt more food truck festival than coffee accompaniment.

Edible contributor and longtime local food blogger Raúl Nava was an early adopter. Like many he is spiritually connected with the pho: “So beautifully aromatic,” he says. “Any time I was sick I ordered it and just sat with it—it uplifted my spirits like no other.” He describes the indulgent bodega bun as his “current obsession.”

The house-made breads and pastries, stylish Sunday brunches and heady pop-ups represented a place ahead of its time.

“They’ve got an eclectic menu that’s globally aware and locally sourced and is simply good quality food, which you don’t expect from a cafe,” Nava says. “That’s become a marketing trend, but they’ve been doing it for a long time because that’s what they believed was good food and good community. That’s what they were doing before it was cool.”

Like many, he’s coming to grips with a loss that is difficult to process, on top of the massive Osio news.

“As food writers, we’re prepared for the fact we’ll be losing many small, local and independent restaurants and we have to steel ourselves for a lot of this tough news,” he says. “And that really sucks. But when Lumiere made that announcement, I was stunned. I should have been prepared, nothing is too precious and anything can go, but Lumiere was one of those places that became fundamental to myself as a person.”

There is a way to help the team—Cafe Lumiere’s Employee Fund—and a glimmer of hope: Aragon is rumored to be opening a bakery in Seaside.