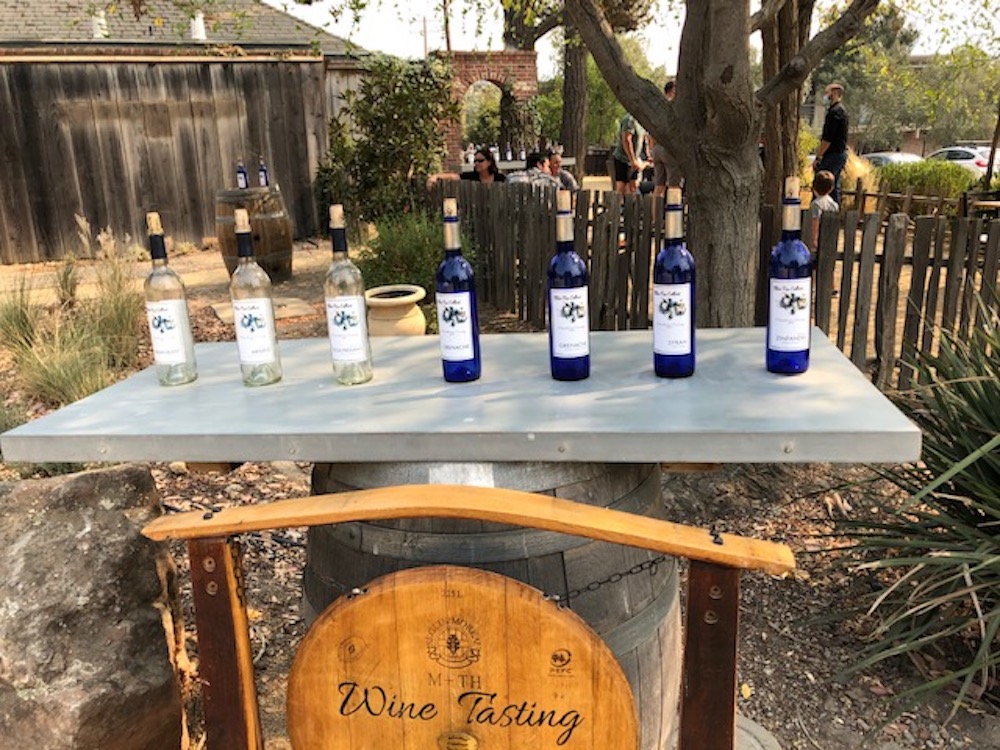 October 6, 2020 – Some who may have visited their tiny spot on Cannery Row pre-Covid, already know about this little gem with the cobalt blue bottles. Winemaker/owner, Edward Lovaas, whose heritage is Norwegian, named the brand, which he started in 2012 after many years of winemaking consulting, figured he couldn’t put red wine in a green bottle. Especially since the label sports a perky blue watercolor rendition of a slightly bemused blue fox. So, blue bottles you will find at the newly opened tasting room in Carmel Valley Village, in the former location of Talbott. You’ll find none of the motorsport paraphernalia here any longer. Instead, there might be gnarly old Carginan vines plucked from vineyards in Redwood Valley, artistically gracing the walls.

Lovaas had just returned with a truckload of old vines after a recent trip north to pick grapes from the handful of vineyards he has come to know and love in the Ukiah area, where he used to live. He grew up in Crescent City, where he says he biked to school past the Pelican Bay prison with his shotgun across his lap so he could go duck hunting after class.  While visiting family up north on the recent road trip, he also spent some time with his uncle in Oregon, who happens to be a cabinetmaker. He brought with him some of the tabletops he had made so they could be sanded using his uncle’s equipment.

We sat at one of those tables and tasted through the wines currently on the tasting bar on a smoky hot day in Carmel Valley, where the crowds swelled to take up nearly every available table at nearby Cowgirl Winery, and a good number of those at Blue Fox Cellars as well. The two wineries share a communal area where guests can sit and enjoy wines by the bottle. Julia, Edward’s wife, hopes to install a commercial kitchen and eventually provide food to enjoy in the courtyard, along with flights of wine. She’s something of a gourmand, explaining that their 5-year old son has been known to inform grocery store produce clerks that they really need to do something about the abysmal tastelessness of store bought tomatoes. He’s used to his Mom’s fresh produce and that of their neighbor. Spoiled, in a good way.

Clearly, Lovaas has very set ways of making wine. He ferments and ages all his whites in neutral French oak, imparting a softness to them that cannot be achieved with steel. As consulting winemaker for several brands on New York’s Long Island (Pindar, Joseph’s Dream), he made lots of white wine in steel, and it’s not his jam. Yes, concrete eggs might be nice, but used Chardonnay barrels are far more cost efficient. Lees stirring is important to overall wine texture as well, and this is done throughout the year plus time that his whites spend in barrel. The care that goes into these wines is evident from the first whiff to the long finishes they each exhibit.

Lovaas chooses Chenin Blanc for its pleasant weightiness, alluring perfume and waxy honeyed tones, while Arneis is his oyster wine for its intense minerality, lime juice core, and distinct aromas of rocks in a wet mountain stream. Tocai Friuliano is one of Italy’s best kept secrets: it gives Malvasia a run for its money, coming off like Carmen Miranda in her fruit laden hat, standing in front of the cosmetics counter at Neiman Marcus handing out samples. Lovaas describes its properties as a cross between Sauvignon Blanc and Viognier, with the sassy, savory, grassiness of the former and the perfume of the latter. On the palate, the wine steals the show with its wonderful fruit, yet natural acid. All his white wines reflect a very low pH and abundant acidity.

These whites come from vineyards planted by colleagues and neighbors he’s know for years, including Greg Graziano, with whom he initially apprenticed and learned the winemaking craft. The path to wine began when Lovaas returned home to Ukiah after a stint as an MP in the Marine Corps. He intended to apply to the Ukiah police academy, but the next class was 7 months out. So, he decided to work at a local winery, San Gabriel. While there, he was tipped off that Greg Graziano, from one of the oldest grapegrowing families in Redwood Valley, could use some help. Grazi, as he is well known throughout wine circles, is one of the most talented and well-versed winemakers in the Mendocino area, making wine for many labels including all of his own. The saying goes, “Grazi never met a grape he didn’t love.” He grows beauties like Chenin Blanc, Arneis and Tocai Friulano, as well as many offbeat reds, like Montepulciano, Valdigue, and Carginane. Lovaas learned to love both those offbeat whites and reds.

As much as I appreciated the craftsmanship of the whites, it’s clear that reds are where the couple’s hearts truly lie. “Grenache is probably my absolute favorite red,” declares Edward. For Julia, it’s the Zin. “It’s my ‘Mommy is locking the bathroom door and taking a very loooong bath wine,’” she says.

Lovaas ages all his red wines in nothing but French oak for at least three years, with no racking. “I despise American oak,” he says. “I can pick out an American oak barrel even if there’s just one barrel in a lot of French ones.” He also finds no use for Hungarian oak in his program. “French oak is superior.” He particularly likes Vosges, heavy toast with toasted heads.

The 2012 Grenache yields nutty aromas of strawberry jam, and flavors of a peach and strawberry buckle, while the 2013, from the Bartolomei Brothers vineyard near the Buddhist Temple in Ukiah, reflects its gnarly old vine heritage, with more expansive flavors and depth, along with a higher kick of alcohol. These own-rooted head trained vines are exquisitely ancient, twisted and glorious. Miniature trees with many stories to tell.

The 2013 Syrah from yet another Ukiah vineyard exhibits meaty savoriness, blueberry and sage, with a lengthy, clove-tinged finish. Zin lovers will appreciate the 2013 Zinfandel, sourced from ancient vines on the Bartolomei Brothers vineyard. It is enormous with earth, baking space, red vermouth and baked blackberry pie. Julia calls this a comfort food wine: something you want with meatloaf or mac n’ cheese.

Whether the couple will keep their currently shuttered Cannery Row tasting room has yet to be decided. They are both loving the more wine country feel of Carmel Valley, and are looking at moving from Monterey to Jamesburg. “I think I want to do some farmin’,” says Edward. “Raise some cattle.” Julia, who has a background in horse training, says she’d like to get back into doing that. She laughs and teases him about the way he said “farmin’,” saying, “Look who sounds like the country boy now!” Apparently, he used to tease her about how she looked like a country girl in her jeans and boots back when they first met.

Somehow, it seems right fitting they wound up next door to Cowgirl Cellars.