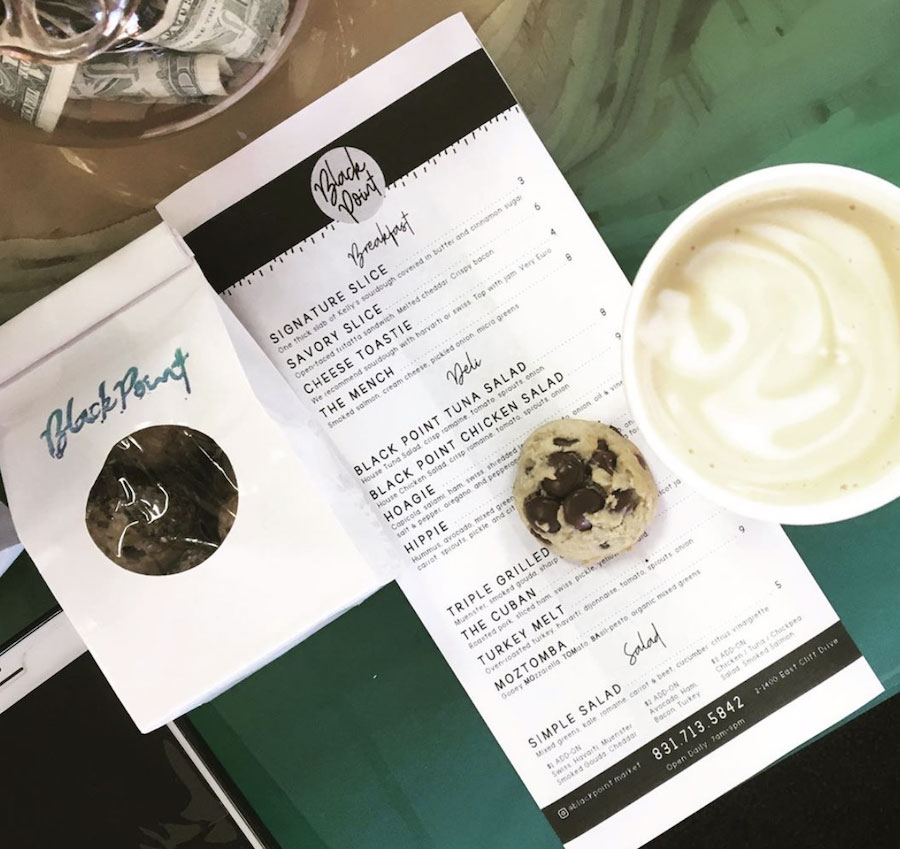 June 11, 2019 – “Good things come to those who wait” is a fitting slogan for Black Point Market, the looooong awaited grocery store-deli-bakery-coffee shop mash-up that has finally opened on East Cliff Drive in Santa Cruz. A year ago, co-owner Sasha Nemchonok said they would be open in three to six weeks, but then reality hit hard.

“We ended up getting ahead of ourselves,” he reflects, but “you can’t rush bureaucracy.” A stop work order put them back to square one, but today, all of that is behind them as they welcome in a stream of happy customers. “It’s been good, the community really needed a place right here,” says Nemchonok.

The affable, customer service superstar has been in the food world for over 10 years. He found himself managing Fish Bar in Chicago, which he says was a very good introduction to hospitality, specifically learning how to “take care of your guests and your staff.” Then he came out west, first to San Diego, and then finally landed in Santa Cruz, managing Assembly restaurant for about a year and then landing at The Point Market on Pleasure Point.

Nemchonok credits Point owner Hassan Ayyad as a major support system. “He’s a very genuine man, he’s got a reputation for being a stand up guy,” says Nemchonok. Ayyad recognized all that he was doing for the market, and even helped him get his small cookie company Cookies at Sunset up and running, so it’s no surprise that the businessman has been a pivotal force in this new venture and is a partner in the business. In fact, the name itself, Black Point Market, is a nod to the sister market at the Point.

Their tagline is “A coastal grocery store offering coffee, local produce, and picnic fare. Just 500 steps from Black’s Beach!” which sums up what is featured in the 1,500 square foot space. Nemchonok says that their “goal is to be community minded” and offer things seven days a week, including fresh produce “so locals don’t have to drive all over town to get fresh food.”

So that means you can stop by for a fresh young Thai coconut, which they will crack open for you onsite, complete with a cute paper umbrella and the Black Point logo stamped onto it, to bring along for your beach outing. They also offer a daily juice, like wellness shots with lemon and honey or fresh ginger juice added to their house lemon-limeade. Sounds like a perfectly fitting beach refresher.

The kitchen, helmed by chef Hunter Brawley who was formerly at Costanoa, is cranking out a petite but hearty menu of breakfast items, hot and cold sandwiches and deli salads. Think classics spiffed up a bit, like their “Signature Slice” of thick sourdough covered in butter and cinnamon sugar, the Cheese Toastie with Havarti and jam. These thick cut toast options are being referred to as “slabs”, a surf reference which is “a tip of the hat to this heavy shore break down the street at Blacks Beach,” explains Nemchonok. For lunch, try The Hoagie, a traditional East Coast sub on a Kelly’s French roll, or The Hippie, a California version that is topped with hummus, sprouts, beets and avocado with a citrus vinaigrette. “If you want to make it a smoked hippy, we’ll add smoked gouda to it,” says Nemchonok.

The four hot sandwiches on the menu are being called “pressed,” buttered on both sides and then griddled. This includes the 24-hour marinated and slow roasted cuban pork sandwich. “The Cuban is really our flagship product, one of the more labor intensive things we do,” explains Nemchonok. And the fact that him and chef Brawley met at a bar and then reconnected later over Cuban sandwiches is a sweet little link between this menu item and their friendship. “It’s the Hunter-Sasha show right now. He does what he does and I do what I do and it’s great. He’s just a rad guy,” exudes Nemchonok.

There is also a bunch of stuff being made for the grab-and-go deli case, like bacon deviled eggs, tuna salad, pasta salad, chicken salad and a chickpea salad in chicken salad form. They are getting  “mega fresh local rockfish” from Ocean 2 Table, the owners of which are friends. “Those are great guys and they definitely deserve recognition,” Nemchonok says about the community supported fishery, which they also source salmon for “The Mench” bagel when available.

They are also featuring Cacoco, the local chocolate maker that makes a wide variety of high quality sipping chocolate. The “Maca Mocha” is a golden sipping chocolate blend with turmeric, maca, cardamom plus coconut sugar and cacao, or the mint frappe that combines the mint sipping chocolate with ice and espresso. It’s real cacao, not the standard premixed sweet chocolate powder that you typically find at a standard coffee shop.

It is pretty obvious that partnerships and collaborations are big at Black Point, as any meander through their products will show. Another example is Bee Hunter wine, a small Anderson Valley label run by Nemchonok’s sister and brother-in-law, who was the winemaker at Navarro and then decided to go out on his own to feature small unique growers. They have four different pinot noirs right now, and their rose has been super popular.,”Their wine is epic! It’s been fun to see that we can sell a $40-$60 bottle of wine here,” says Nemchonok, noting that locals are willing to pay for higher quality products.

Some other goods include Happy Girl Kitchen pickles and jams, local honeys, Burrell School and Integrity wines, hard kombucha and cider, an entire section of coconut water and bubbly water (“we want to make sure folks stay hydrated being so close to the beach”), and even a significant gluten free selection of beer. Speaking of beer, all the six packs on sale at Black Point are in cans (which fit quite stealthily into your favorite koozie at the beach). Right now they are working on getting a large variety of craft 16oz cans, so you can mix and match a custom four pack.

A big part of what makes Black Point special, is the extra mile everyone involved takes. For example, because they don’t work with a lot of standard distributors, owner Ayyad has been known to jump in his sprinter van to go over the hill to shop for a variety of things. Or the time that someone came in looking for specific vegetables to make a soup, and instead of turning her away, Chef Brawley made her a custom mirepoix pack from his supplies in the kitchen. On Tuesdays, Nemchonok makes his signature gluten free, vegan cookie nugs, which have been a great example of value added, low waste philosophy. Since they happen to have a lot of extra coconut meat lying around from those young Thai coconuts, he’s been making a coconut cream and incorporating it into a special cookie flavor.

In the end, the main objective is just “to keep it really straightforward and fresh,” says Nemchonok. And so far, “People are stoked…the food’s good!”