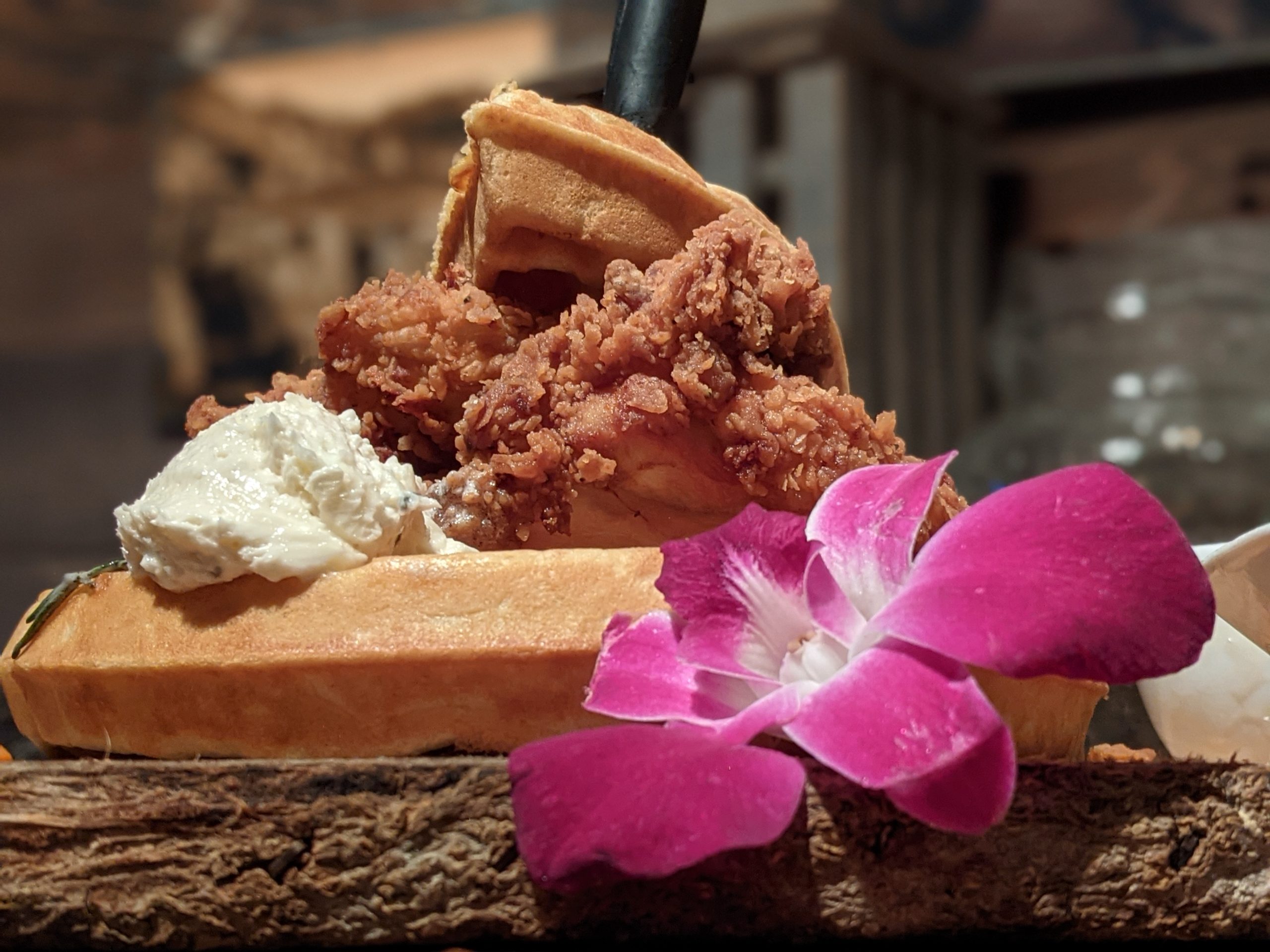 February 16, 2021 – After decades in the restaurant game, Bill and Teresa Lee have survived just about everything the industry can dish out, from properties that appear doomed to private parties that appear destined for arrests.

So when they started seeing ghosts, they embraced the vision.

It’s not hard to understand why: Across the country, so-called “ghost kitchens” are proving good business.

While the meaning of the concept varies depending on who you talk to, for them it translates to creating a new “restaurant,” or virtual restaurant, with its own menu—in this case, Barnyard Fried Chicken and Waffles—and running it out of an existing kitchen at their popular SUR Restaurant.

When someone from neighboring Carmel Mission Inn, for example, sees the menu cards in the lobby (next to SUR’s menu) and orders, say, a Barnyard fried chicken sandwich and a Doc Pepe’s Lab bottle of Manhattans, the order comes through the kitchen as would any other, the team bundles it up and off it goes.

The Lees took inspiration for the virtual spinoff from sources both mainstream (Denny’s Burger Den) and mom-and-pop (Seaside Seafood Market’s By the Bay BBQ).

“I see ghost kitchens as unidentified physical locations where a restaurant is operating for convenience of home delivery,” Bill Lee says. “You take the culinary skills of a great chef and put him into a format that’s adaptable in price and quality that works for delivery. The people doing it love it—they’re not regimented in the kitchen doing elaborate multi-course dinners but doing $11-$12 dishes that have people coming back for more. It’s a way for chefs to work and survive and keep his or her skills going.”

Barnyard Fried Chicken & Waffles comes headlined by the namesake dish, which runs $22 and veers into extreme indulgence once the honey and maple syrup hit the crispy panko crust and thick waffle. But the most prodigious value is easily the fried chicken family dinner: Eight pieces (four breasts, four thighs), elote-style corn on the cob, cheese bread, mashed potatoes, gravy and tropical coleslaw total $38 to-go or $48 dine-in. It’s all solid, but the juicy restaurant-grade chicken and garlicky cheese bread prove as delicious as the deal does ridiculous.

“We’re shooting for the value,” Lee says. “If you can enjoy fine dining at home on a budget, all the better. I like lowering the price a couple of bucks—we’re not comparing it to SUR, we’re providing another platform.”

There are other survival strategies in play at SUR.

To-go adult beverages are available and on display, including “On the Rocks” bottled cocktails, customizable local craft beer buckets, “happy hour” specials made to order at the bar, and 30 percent off wines taken off premises.

Meanwhile they’re making the most of outdoor heaters, the lush Barnyard gardens, and reciprocal seating partnerships with the likes of breakfast-lunch neighbor From Scratch to maximize outdoor seating so efficiently they seat roughly as many as they did indoors.

“I really do enjoy the challenge,” Lee says. “There’s a whole new awareness for myself and my wife and our customers on how to get through [COVID]. The struggle opens you up to the vulnerability of what can happen in life.”

Valentine’s was the busiest night since well before people knew what social distancing meant, with an estimated 400 guests. Bustling nights attune Teresa to the positive energy of her team.

“Our high school staffers don’t have much of an outlet without sports, classes and dances and they’re a huge part of our team,” she says. “To be open and see them work so well together to achieve great service on a busy night, delivering food, working our computer system, is that much more meaningful to me because of that. It’s such a cool vibe.”

Bill adds that he’s received and distributed far more anonymous cash tips of $500 (and up) than any time in his long-running hospitality career.

“Supporters have come out of the woodwork,” he says. “In a lot of ways I like the appreciation that COVID has brought of how precarious everything is. The cohesion is fantastic.”

Like many other pandemic-driven developments, Lee has a feeling ghost kitchens won’t ghost eaters. He imagines a communal model where a handful of chefs experiment with more control and freedom—not unlike what’s happening with The Shop Monterey, where a range of epicurean operations including Little Luna Cheeseboards, Parsley + Fig, Miss Lippe’s Dumplings and Nitro Cycle 831 coffee share space.

“I’d like to find a location that may not be great for a restaurant but is great for delivery,” Lee says. “I picture chefs all working together doing fun things and owning their own businesses.”

That suggests that even with all the goodies that come in the new family fried chicken tray, there’s an additional element tucked in there: a taste of the creativity that can help keep the industry cooking.

Barnyard Fried Chicken and Waffles is open 4-8pm Tuesday-Sunday. To order call (831) 250-7188 or visit SURCarmel.com and click on the BFCW menu tab.