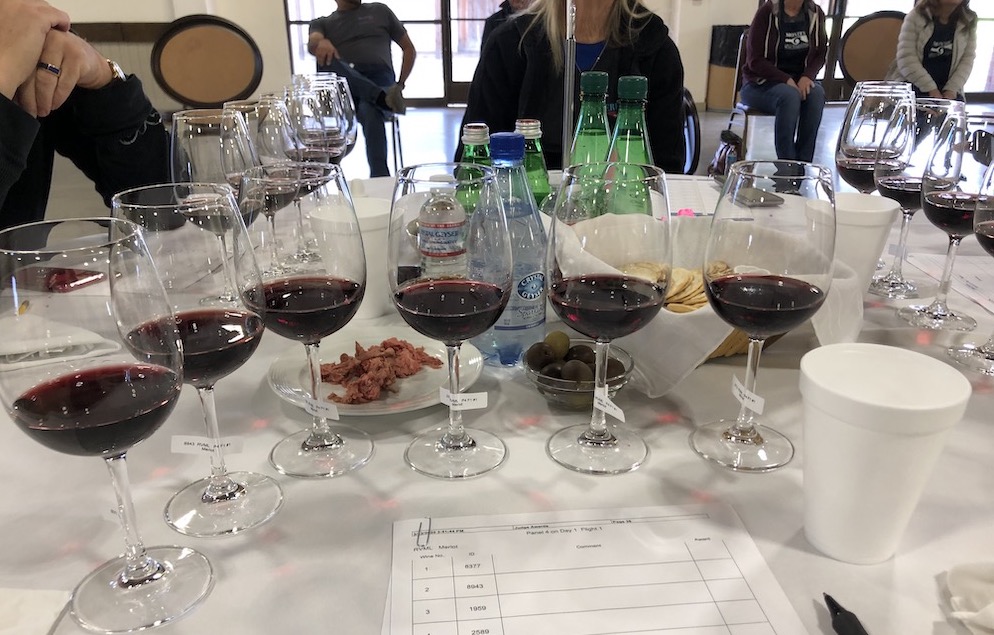 April 14, 2020 – The 27th annual Monterey Wine Competition will forever stick in my memory, for many reasons, not the least of which is that it was the last wine competition in CA to sneak in before California’s lockdown order. It was also the first one I’ve judged where we tasted wine-based seltzers, and yikes, that was strange: it was even worse than it sounded, although they did remind me of fizzies, those bizarre carbonated drinks of yore.

It was also the first such competition I’ve judged that Hahn didn’t enter, which came as a bit of a surprise. But Scheid and J Lohr showed up, along with other local wineries. As always, it took place in King City, where the raindrops turned the already beginning to brown eastern Gabilans back to their proper state of verdancy for March. The views of the Santa Lucia Highlands bench on the way home on a showery Sunday were shimmering with every shade of green, enough to make me forget, at least for a moment, about the mounting viral crisis that has since taken over every inch of our electronic device screens and every last remnant of our fevered brain cells. Thinking back on it brings a smile: especially when I recall the judge’s dinner served up by the Fair Staff, featuring emerald forests of freshly picked broccoli accompanied by several steer’s worth of succulent tri tip. It was a very bad night to be a vegetarian. But it was delicious.

When we started the judging day with a dozen Merlots, I knew it was going to be a wild ride. Chief Judge and organizer, Rich Cook, is one of the few competition organizers who subscribes to the theory that you don’t start the day with whites, stripping all the enamel off your teeth for a few hours, then knocking your palate silly after lunch with a slew of heavy reds. Instead, he likes to mix it up, and I applaud that. Our morning agenda included Pinot Noir, Cabernet Franc, Cabernet Sauvignon, Syrah, Primitivo and Blended Reds, after which came lunch, followed by many Rosés, Gruner, hybrids, a plethora of Chardonnay, a smattering of Pinot Grigios, some interesting Albariño’s and those aforementioned tutti frutti seltzers.

So, to make matters even more interesting, I was on a panel with arguably one of the biggest characters in the Central Coast wine world, Adam LaZarre, which is an easy name to remember, because he used to be VP of Winemaking at Hahn Estate, back when they created superstar wines like Rex-Goliath and Cycles-Gladiator. He’s unforgettable also for his unpredictable antics that can definitely fall right into the attention-getting category. Today, his winery is in Paso, where he makes wines with wife, Angie, (who you might recall used to be Hospitality Manager at Hahn and Smith & Hook.) Although it began as an ode to single vineyard Pinots, the label also focuses on varieties like Merlot, Albariño, Sauvignon Blanc, Vin Gris, and Chardonnay. (He also makes lots of wine under different labels for Costco and Trader Joe’s. He keeps busy.)

Joining us on the panel was another Paso Robles area winemaker, Leon Takitt, of Takitt Family Wines in San Miguel, who was judging his first wine competition, and who happens to be a friend of Adam’s. Great, I thought: I’m surrounded by way too much cowboy testosterone too early in the morning. Oh, and they were both in the Navy. I’m doomed.

Not knowing what to expect, I was blown away by the first wine in our very first flight. Apparently, we all were. In fact, we immediately awarded it a Platinum, which is the highest award at this particular competition.  Upon initially tasting it, Adam said, “F—k yeah, this is a great Merlot! I wonder who made that?” Well, it turned out it was his, and nobody was more bowled over than he. A fortuitous way to start the day, indeed. That wine, a 2017 from Paso Robles, went on to be crowned Best Merlot of Show.

Of Merlot, of which LaZarre is fond, he observed that a winemaker either nails it or produces something sadly underwhelming. There are no “styles” like in Pinot, which is what makes the tragedy of the ill-begotten film “Sideways” all the more poignant: a brilliant Merlot shines like the North Star with a gleam of reassuring familiarity that any wine drinker can appreciate, while Pinot takes you down all manner of individual ratholes of preference. There’s no flag to rally around with Pinot, which may explain why a 2018 Russian River Valley Pinot from V. Sattui, far better known for its big bold Bordeaux style reds, took Best Pinot at this competition.  You’d really think our local Monterey wineries would easily outshine RRV.

Big winners at the 2020 Monterey Wine Competition included Cru Winery, that took Best of Monterey for its 2017 Arroyo Seco “Montage” Chardonnay, and ZD Winery, named Winery of the Year, with the 2016 ZD Reserve Cabernet Sauvignon ($230), scoring 100 points and taking Best of Show Red.

Best of Show White went to superstar Carol Shelton for her 2018 Coquille Blanc (Paso) and Best Rosé went to Navarro Vineyards for their 2018 Pinot Noir Rosé from Anderson Valley. They also took Best Barbera for their 2018 Mendocino, and it was excellent, if you are looking for one for a mere $25.

Marin’s Vineyard scored Gold for both the 2017 Malbec and 2016 Cabernet Sauvignon (Monterey County).

McIlroy Cellars, out of Sonoma, scored Silver for their 2018 Pinot Noir from Chock Rock Vineyards in Arroyo Seco. This vineyard, you’ll recall, is owned by the venerable Dan Karlsen, who once had a Chock Rock Vineyards tasting room in Carmel Valley, and was formerly winemaker at Talbott.

Neely Wines, in the hills of Portola Valley, scored Platinum for their 2017

Congratulations to the all the winners! Now, go out and buy some. That LaZarre Merlot ($48) is really worth a splurge for a renegade lockdown steak dinner. And it was really great judging with two guys from Paso who really know their wines.