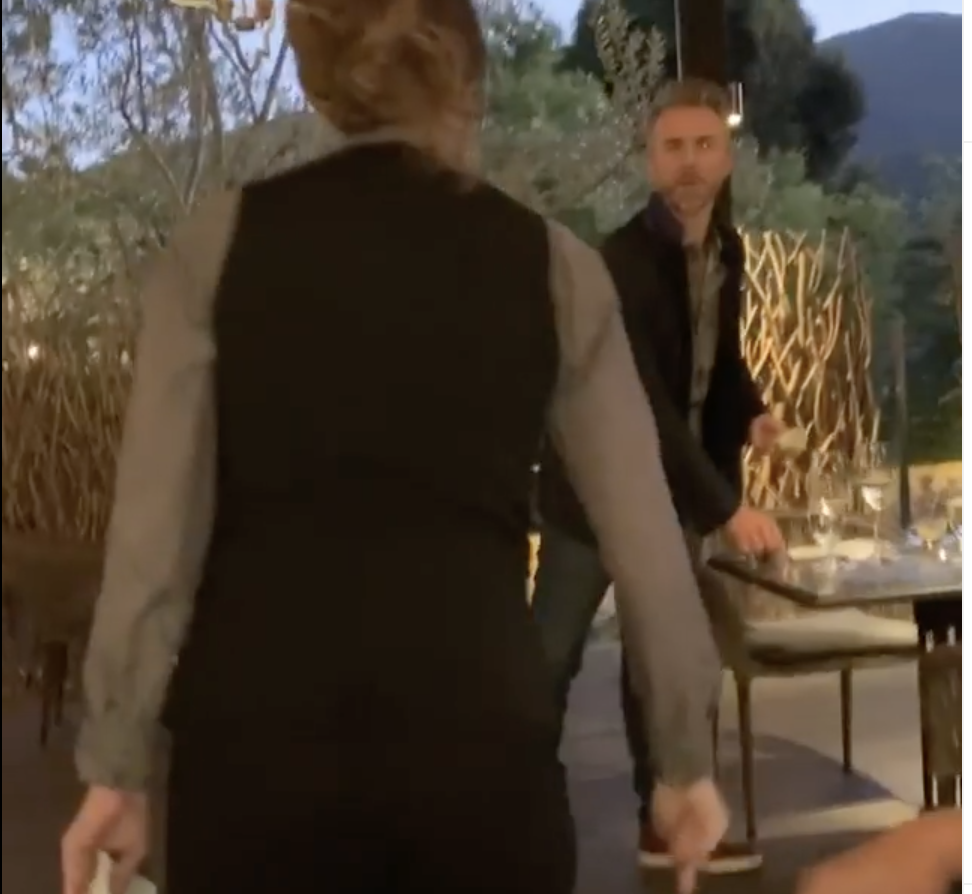 July 14, 2020 – It’s been an interesting week for Gennica Cochran. She’s the Bernardus server who’s become something of a viral legend, and a GoFundMe rallying point after she interceded when Michael Lofthouse launched a racist attack on an Asian family dining at the resort’s Lucia Restaurant July 4.

One intriguing element of her week: three GoFundMe campaigns started in her honor as a “tip” for doing the right thing romped well past their goals to total nearly $115,000 as this piece was filed.

Edible Monterey Bay tracked down Cochran to discuss that intense moment and put it in context. Here it appears in transcript form, edited only for clarity and brevity.

EMB: So I imagine the last few days have been different than usual.

Gennica Cochran: It’s overwhelming. I don’t think I did anything. I spoke up when you’re supposed to. I was across the terrace, [preparing] a table for dessert, when I heard them start to go back and forth. I heard someone in the Chan family ask him to, “Say it again” and I had a sense things might get worse.

One of the things that gets me is people asking, “What’s the full context?” [or] “Is this a setup?” Nothing happened. They didn’t do anything to deserve it. He was rude to staff. [He and his wife] sent food back. We were alert he was going to be difficult.

We were prepared to handle it. Because that’s what we do. There was nothing to trigger this. They didn’t engage with him. It’s important for people to know that. It wasn’t a setup. It was pure hatred, caught on camera.

A tough reminder that maybe the only thing that’s changed is we now have smart phone video.

[Hatred] has been with us hundreds of years, now it’s just coming to the surface. We’re just now catching it. It’s painful that the family endured these things.

But we can start having these discussions: How to be an ally. How to show up for people. This is something that doesn’t have to happen. No one deserves that treatment, ever ever.

Maybe it’s just me, but Bernardus’ messaging has seemed a little weird. (See “Closing thought,” below, for more.) How have they handled things internally?

I’ve had [GM] Sean Damery reach out. I’ve had HR reach out and say, “I’m so proud of you.” I’m being an ambassador and they’re fielding a lot of media.

My coworkers and managers, they all have my back. The moment after it happened, they were there, telling me, “You did the right thing. There’s no one I’d rather have in that situation.”

We’re a team. And our team is incredibly cohesive.

[Lofthouse] had been terrible to the entire team the entire night. There were flags. After they were seated they moved themselves. When their server greeted them, they were upset at the new table and demanded we move them [again].

In situations like that we try to make interactions as short and sweet as possible, and to be flawlessly polite. It wasn’t my table, but I knew he was an issue. I believe he ordered a filet and sent it back at least twice.

You have to be in that position to know what being on a team feels like. This team has been together for years. Many worked there while it was Marinus. I am well-versed in what it’s like to be on a service team. I stay there because of those people. The chemistry. When it clicks, everyone around you feels it. We truly love each other.

We had a discussion about Alderwood before any of this happened. That’s what a team does.

It’s a holiday, Fourth of July, in the midst of a pandemic. I have a mask on my face. You’re not going to come into my house and say something like that. You can’t treat people like that.

Are you surprised when people are surprised at what service staff endure?

I’ve had a [diner] get in my face because she didn’t get a burger on time. It’s not a new thing. If you haven’t worked in the industry, you might not understand. We’re there to do it because we love it, but we put up with a lot.

People do feel very raw right now. Our job comes with understanding that—an understanding you’re meeting people where they are. Any time I approach a difficult guest I want to understand where they’re coming from, fix it, make it better. I don’t want anybody to feel like they don’t belong.

But I also understand we have to be protective of our team.

When you work a long shift with a great team—you know, one of those intense nights with 100-plus covers and no busser—there’s an amazing feeling of, “I can’t believe we just did that.” But you have to work together to make anything like that happen.

Sounds like a good lesson for all of us right now.

There is no other choice. We can be cohesive.

Even if we have to confront some uncomfortable truths.

Things have to get uncomfortable if things are going to change.

Yes, these are strange days—challenging days, scary and unprecedented days too. But communication from Bernardus Lodge in the wake of the racist explosion from Lofthouse still qualifies as subdued.

First came a statement released by General Manager Sean Damery: “This is an extremely unfortunate situation, however we are proud of our staff at Lucia in keeping with Bernardus Lodge’s core values; this incident was handled swiftly and the diner was escorted off property without further escalation,” said Damery, who’s also vice president. “We provide guests with a safe environment for lodging and dining, and extend our sincere apologies to the guests enjoying a birthday celebration on a holiday weekend.”

When I called to ask Damery to elaborate, the man who fielded the call advised, “There will be no further statements whatsoever.”

The questions I was hoping to explore with Damery weren’t going away, however: Where does the line between service and servitude lie? How can restaurants best protect guests and staff from abuse? What trainings are in place and/or can be added? What if no one films it? How can restaurants be actively anti-racist?

So I called and emailed again. Damery declined a phone interview, but I sent him some of those questions and he provided what he characterized as a “sole statement based upon [Edible’s] request,” adding he’d denied at least 10 other media requests for comment:

“I believe that the success at our resort and company culture boils down to empowerment at the deepest level. Associates who feel that type of support are therefore more inclined to speak up on their beliefs and on behalf of the business.

“Service, especially in hospitality is broadening to now include standing firm on social boundaries. We take a proactive stance when it comes to that aspect of the guest experience.”

I also called Executive Chef Cal Stamenov. He expressed pride in his staff but deferred to management on messaging.

So I didn’t get all the answers I was hoping for from leadership. That made me all the happier to reach Cochran—who, according to her, spoke with the blessings of Bernardus. And I think she spoke eloquently on the balancing act that is this most demanding profession amid, to borrow her descriptor, very “raw” times.

All this reminded me, in a distant way, of what happened at Alderwood Restaurant as it grappled with how to treat its more personal racist crisis. (As of this piece publishing, police investigations are ongoing.)

Leadership at Alderwood didn’t come from management and ownership. For days after the incident, they held no meetings with staff to discuss what happened or to talk about what might evolve going forward. Leadership came from the workers who risked their health for the sake of service, and resigned in solidarity for a fired coworker and out of frustration at the vacuum of communication.

They provide a powerful reminder progress can come in different directions than from above.