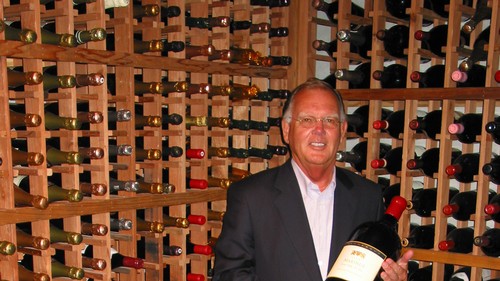 October 1, 2019 – His life story reads like adventure fiction, what with the professional Porsche racing, Olympic Games (as a marksman), estate game hunting in Somerset, international business victories, legendary wine dinners, an African safari company, and his status as the oldest living Dutch Formula 1 driver. His wines rank among some of the best in California and are the toast of his home country of Holland. His influence and family name made him a celebrity back in Europe, and he helped boost the image of Monterey County wine country.

As Bernardus Winery spokesman Rob Baker puts it, “The Dos Equis Most Interesting Man in the World is extremely pedestrian compared to Pon.”

But as a community now mourns his death, those who knew Bernardus Marinus Pon focus on other qualities, including his unique character, the way he treated others, his natural generosity, his ability to bring people together and his verve for life.

“He not only defines trailblazer, but something more,” Baker says. “Most people in his position are friends with others at that level, but he was always kind to everyone in the rank-and-file positions, from the top to the bottom. He had a huge heart, lived a huge life and is a one-of-a-kind, forever.”

Bernardus Winery announced his passing via Instagram on the day he died, Monday, Sept. 30, at 82, writing: “Saddened but full of good memories we remember the quirky way in which Ben was in life, as an entrepreneur, sportsman and passionate wineman…we are not only losing a striking member [of the family] but above all a fine friend.”

An outpouring of well wishes and remembrances has ensued on Instagram. “Thank you for all you have done, your vision and contributions to our community,” wrote restauranteur and winemaker Walter Georis. “We will miss this exceptional personality.”

“I always felt so grateful to be able to call you a friend,” added Coastal Luxury Management founder David Bernahl. “I’m thankful for all the beautiful human beings you brought together in your passion for life.”

One of the most poignant tributes was also the simplest, from Pon’s vineyard manager and close friend Matt Shea. Despite a multi-decade age gap, they regularly enjoyed marathon lunches together stacked with good food and better Bernardus wine.

Shea posted a photo of a glass of wine and bottle of 2012 Marinus with the words, “To BMP.”

When Pon fell in love with Carmel Valley in the late 80s, it was a dustier, rougher, rural place, its DNA decidedly more cowboy dive bar than boutique wine tasting destination.

Shea recounts a story he heard when he first moved to Cachagua, about Pon’s arrival in 1988.

“I met a funny local guy who said way back then Mr. Pon picked him up in his Porsche hitchhiking,” Shea remembers. “They drove around for several hours while Mr. Pon asked him all kinds of questions about the area. It shows that not only was Mr. Pon comfortable with people from all walks of life, but also was a meticulous business man who researched his projects thoroughly.”

Pon loved it here, bought a house almost immediately, then a winery, and was soon opening the valley’s first tasting room (Bernardus). Meanwhile, he decided he would lead the transformation of Carmel Valley Inn into Bernardus Lodge. It promptly evolved into a world-class venue that has produced many of the area’s most celebrated hospitality pros.

“If you look at the chefs, GMs, cooks, stewards, etc. the Monterey Peninsula is covered by people that were once with us at Bernardus,” Baker says. “When you think about it, it’s truly amazing.”

Bernardus executive chef Cal Stamenov has been there from the beginning, 20 years ago, and credits Pon with making Carmel Valley the luxury destination it is today.

“There wasn’t a lot going on in the late 80s and early 90s,” Stamenov says. “He was always 100 percent quality-oriented. That was the best part. There was always quality. That’s the reason I came here in the first place.”

Carole Forest was the then-CFO who hired Stamenov at Pon’s bidding and managed Pon’s U.S. holdings for 17 years (interesting note there: Pon didn’t want her card to have a title). She remembers a man who loved golf, the relative anonymity of America and, more than anything, grand plans.

“He was an idea man,” she says. “His theory in business was simple: Come up with the ideas, then hire the best people to figure it out and do it. Do what you have to do and make it happen.

“He doesn’t want to know the financials every month. That didn’t interest him. He wanted big ideas and big results, much like his father [who developed the Volkswagen bus and brought it to the U.S.].”

Along the way she noticed something else.

“He treated everybody with the same respect,” she says. “He didn’t let people disrespect people. It really upset him if individuals didn’t treat [staff] well, particularly line staff—bellhops, cooks, servers. He wouldn’t necessarily intercede himself, but he would make sure it was addressed.”

Monterey County Vintners and Growers President Kim Stemler provides some perspective on what he did for area wines.

“The bon vivant Ben Pon could have chosen to make wine anywhere in the world and he chose Carmel Valley,” she says. “He believed the terroir of deep Carmel Valley could grow wines equal to the best of Bordeaux.”

He was onto something, employing French-trained winemaker Dean DeKorth and Shea to do exactly that.

“The result is Bernardus wines, one of the most widely distributed wines in the world for a winery of its modest size,” Stemler continues. “Known for its elegance and consistent quality, Bernardus wines have helped to elevate the renown of the county and the sub-appellations—especially the Carmel Valley, Arroyo Seco, and Santa Lucia Highlands AVAs—throughout the world.”

When Bernardus celebrates its 20th anniversary at the lodge on Carmel Valley Road 1-3pm Sunday, Oct. 27, with the artisan-driven Grand Tasting and Craftsman Exchange, his presence will certainly be felt.

While this chapter has closed, it happened without two things ever stopping, according to two of Pon’s longest-running collaborators.

From Cal Stamenov: “Even at the end, he never gave up, he never slowed down,” Stamenov says. “He was living and driving fast to the end. Last time I saw him it was two weeks ago, glass in hand, enjoying life.”

And from Carole Forest: “He never stopped dreaming. There was always the next project.”

Per Bernardus Winery’s Instagram page, a celebration of life will be planned in the coming weeks.