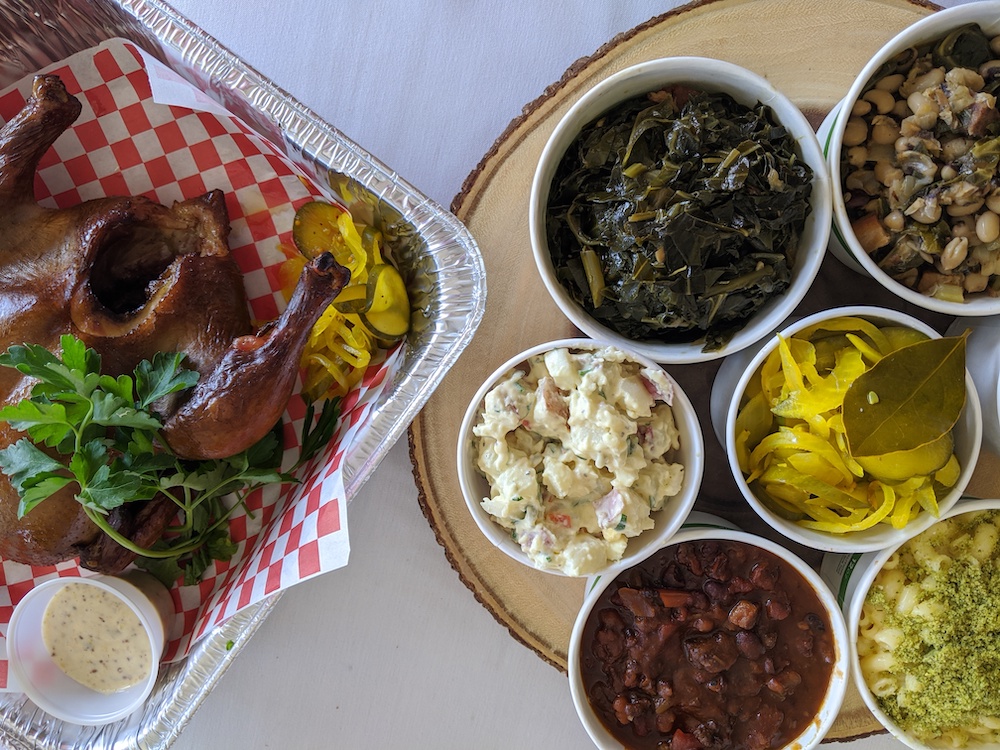 January 20, 2021 – There are so many ways to understand Seaside’s brand new By the Bay BBQ—and sister restaurant Seaside Seafood and Market—that it’s hard to know where to begin.

So let’s start with the slap-your-mama flavors.

That’s the official language chef-partner Danny Abbruzzese taps describing the restaurant’s strength (among many), the sides.

Seven all told, the sides are good enough to earn center stage. (One way to do that is the “Gimmi Just Sides” plate.) The collards combine textures and depth that, on a foundation of smoked ham hock, feel like a meal all by their lonesome. The baked beans register sweet for some, but that’s part of the Alabama identity of By the Bay, and I welcome the molasses interplay with the earthy beans and indulgent pork belly. The Southern slaw isn’t shy with its sauciness, thankfully, and doesn’t get soggy. The black-eyed peas, which honors Abbruzzese’s primary inspiration by name, would make Vanetta proud. The house bread-and-butter pickles make for tasty palate resets.

Abbruzzese—who also helms the kitchens at Portola Hotel—spent a decade in the South on and off, opening restaurants with his culinary school comrades and starting his own gumbo houses, fish house and even a working farm-restaurant with its own hogs and crops, moving from Birmingham to the Gulf Coast to Selma.

In Alabama he recognized something familiar from his youth in Brooklyn, New York. “It aligned with the way I grew up with Italian food and [its] tradition, the classics, the inherent flavors, the deep home cooking. I had an affinity for the really homey powerful flavors, done fresh.”

When it came to the sides, he considered the veg-leaning audience out West, but caved to cravings.

“We eat differently here than the South, so it’s a challenge,” he says. “The one thing we thought was, ‘Are we going to do this the way it should be done? Ham hock broths, turkey broths, everything-in-a-smoked-broth?’”

The final verdict, he decided: “We want to go Full Monty.”

Platters come with two sides, sandwiches—like the brisket and po’ boy—with one side, family-style “double-” and “triple-wide” baskets with up to three pints of sides. I’m eager to test the country potato salad and mac and cheese next. The banana pudding, BTW is legit.

Speaking of the po’ boys, they come with fried shrimp, oyster, catfish or true cod. I tried the fried shrimp version and it didn’t last long on my plate: The Cajun-seasoned crispy shrimp, in its buttermilk and cornmeal crust, is light and crunchy, the proportions of sauce, soft roll, fresh tomato and shredded lettuce balanced. This is outstanding news, because for me barbecue can be a once-a-month meat spree, max, but I could eat a fresh seafood po’ boy twice a week. The only thing missing is Southern hot sauce.

House barbecue sauces provide another great window into BTB’s soul. The dark house barbecue sauce also reflects the Alabama heritage, with a thinner, vinegar-based, sweet-leaning liveliness. The atypical white barbecue sauce, summoned from a blend of mayo, distilled vinegar, horseradish and whole grain mustard, is built for fish and chicken, but proves more versatile than that. I swabbed it on everything from cornbread to pulled pork, and when they were gone, I combined the sauces and toasted sourdough to dip. When that was done, I drank the rest of the ramekin.

The style with the meats is also a departure from the tri-tip and heavy-sauced offerings of the West Coast. The idea is to emphasize natural flavors and textures. “That’s what smoking is all about,” Abbruzzese says.

Smoke works best with pig: The pulled pork melts in the mouth, and the pork spare ribs make for a fall-off-the-bone favorite. The chicken, smoked whole, would benefit from less rubbery skin but delivers big flavor beneath. The corn-fed beef brisket—which like all the meats, is curated in consultation with career restaurateur pro and purveyor Rocco DiMaggio of Sysco—is simple, spot-on and amenable to extra sauce.

The four meats are available by the pound; platters dedicated to each meat and a Southern chop salad round out the menu.

The owner-operator backstory inspires more faith Seaside has found a keeper for a linchpin property.

Abbruzzese’s friends and BTB/Seafood & Market partners Andrea and Anthony Guajardo also run Mijo’s Taqueria in Capitola, as they have for four years. In fact, they just celebrated their best December yet. “It said something about locals,” Andrea says, “and what they do will do to support you.”

They’ve not only been in the hospitality industry for years—Andrea started out at 16 slanging Hot Dog on a Stick on the Santa Cruz Beach Boardwalk and has worked everywhere from Monterey Bay Aquarium to Bernardus Lodge—they’ve taken board leadership positions with the local chapter of the American Culinary Federation.

In other words, they get it. Exhibit A to that effect: They understand how much locals loved Fishwife, so they’ve drawn from and evolved that menu with their Seafood Market takes. Exhibit B: They retained iconic server Charles “Captain Best Of” Stanco, who has worked at 789 Trinity Ave. for decades. Ask what it’s like to help usher in a new era, Stanco is succinct, “It feels real good.”

Included on the Fishwife holdover menu are items like Monterey cioppino, seafood fettuccine and jumbo fish boils, with some interpretations of Fishwife favorites. Fish and chips and fried catfish have been best-sellers.

Abbruzzese nods to the original Fishwife creator in describing the seafood strategy. “We’ll still have Julio Ramirez-style Latin flavors, but we want to focus on California fresh,” he says.

By the Bay BBQ and Seaside Seafood & Market represent fraternal twins of sorts: different looks but the same DNA, namely a desire to bond with locals.

“The seafood has had locals coming for 35 years, and they’ll keep coming regardless,” Andrea says. “The big goal for us: Get them to come twice a week instead of once—and we’re starting to see a lot of Seaside residents come through.”

Anthony elaborates. “We give you options,” he says, “but really just want to cook good food for the community that we have experience with and can really let us last down here.”

I have a feeling it will.