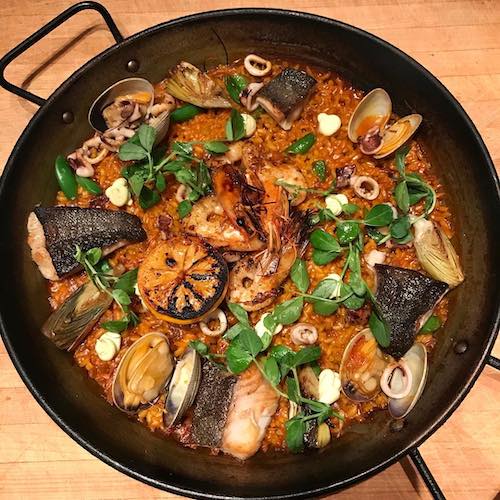 EMB caught up with owners Brett and Elan Emerson as they were having coffee in their beautifully decorated, but still empty restaurant this week. They said they are anxious to open, but are waiting on final permits from the city before setting an opening date and staffing up.

We got a sneak peek of the menu, which is similar to the Emersons’ Contigo restaurant in San Francisco, but without the entrées. It consists of mostly small plates and three versions of authentic Valencian paella, which can be ordered for two people or four.

The Emersons are dedicated farmers’ market shoppers and will try to source fresh ingredients there as much as possible, adding seasonal dishes. There are also a few nods to California produce on the menu, such as the kale salad.

At the bar there will be Moritz beer from Barcelona on tap, along with Spanish vermouth, fino sherry and a crisp, food-friendly verdejo white wine from the Rueda region in central Spain.

Along with most of Santa Cruz, we can’t wait for them to open. City officials, hurry up!