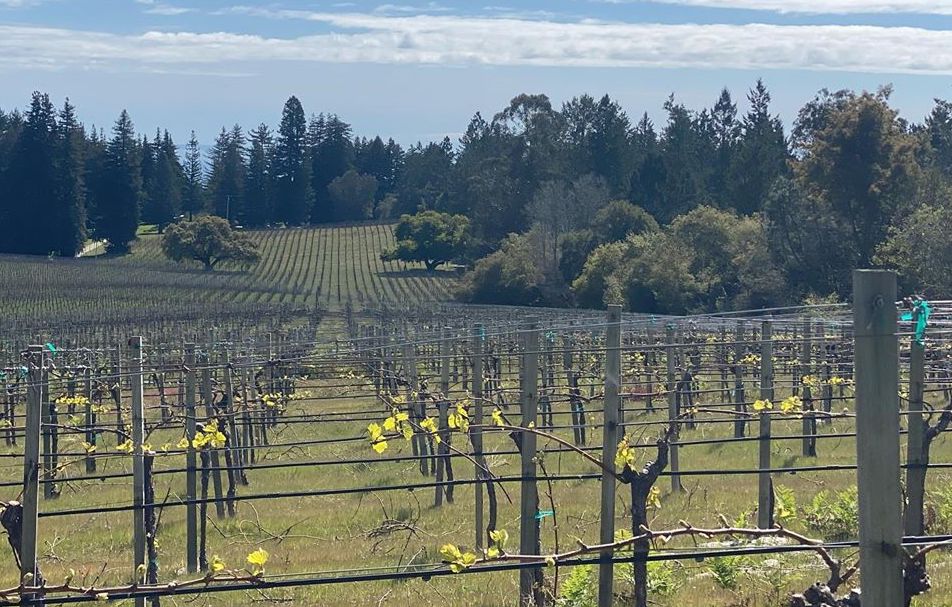 April 28, 2020 – Winegrower Ryan Beauregard has been moving full steam ahead on the Bald Mountain site-clearing project since the beginning of March, well before the Shelter in Place orders came down. At one point, he had 15 crewmen working every day, driven by a short window for burn season after a bone dry February and what turned out to be a poor rain performance in March. After clearing and burning the old vines—9,000 of them in the block—along with underbrush, they spent weeks doing ripping and grading, preparing the soil for the installation of irrigation and trellising infrastructure.

Says Beauregard, “I’ll do my best to get all the metal in the ground this year and plant dormant plants next winter. Everything is being done first class. We’re installing the best trellising, the best irrigation, the best rootstocks, the best clones. I’ve had lots of time to survey the property to see where the exposures are, observe the sun angles and so forth. This has to last. This is a Grand Cru vineyard.”

After leasing the 39-acre property on Ben Lomond Mountain that has been home to the 32-acre Bald Mountain Vineyard for almost 30 years, Ryan, his wife Rachel and Ryan’s Dad, Jim, finally purchased the property from the family who owned it. For the Beauregard clan, acquiring such a prime piece of vineyard real estate, which happens to be its very own AVA, is a manifestation of their destiny in the wine business. It’s also a once in a lifetime chance to set themselves up for another 30 years of premium wine production. The long-term lease contained a purchase option, and after some soul searching, Ryan and Jim realized they could qualify for a government lending program through the Department of Agriculture for replanting the vineyard.

Not only was this an opportunity to improve an already hallowed site, but it enabled Ryan to acquire more estate land for a growing brand. “When I am 70 years old and still making wine, I want it to be all estate. I am planting this vineyard for bottles, not for tonnage,” he says.

He wants to have all the variety possible from this particular vineyard: not just the outstanding Chardonnays and Pinots for which he’s known, but he’s also pretty jazzed about Gamay Noir, the grape of Beaujolais grown on the outskirts of Burgundy in France.

He’s planning to plant a small amount of Syrah as well and is flirting with the idea of Merlot, one of his favorites. He thinks it could do well on this site. The sparkling program will expand as well, and he’s thinking to plant some Pinot Meunier here to round out the complexity of a Brut.

He’ll keep the remaining 19 acres of old vine in production for the time being, noting that he has more buyers than he has fruit, as the reputation is so renowned. “I want to continue those relationships.”

As for the impact of the SIP lockdown, Beauregard says it was pretty hard being forced to lay everybody off in the tasting room/sales side when the SIP order first came down. He would have had to let his AG crew go, but he had taken out a loan when he purchased the Bald Mountain property, and was able to use some of the money to fund the clearing project. “You cannot put ag on hold,” he points out. “You can’t not prune the vineyard, you have to keep up with wine production. I’ve been personally working 50 to 55 hours per week since the lockdown.”

Beauregard was fortunate enough to have qualified and is now receiving benefits from the first round of stimulus PPP, so, he hired back two other staff members to help his DTC manager, who has been doing an awesome job throughout. The PPP will cover 8 weeks of payroll.

All three staff are now busy talking to customers on the phone, replying to emails, fulfilling orders, packing boxes, shipping wine and so forth. When we talked in late March, before the PPP, he said he hoped the burst in online sales would last long enough to pull them through. “I am going to go full blast all the way to bankrupt,” he said then. Now things look a little more promising, although he says sales are softening a bit.

Not one to focus on the negative, Beauregard has avoided using the language of the pandemic in any of his email communications to his list of nearly 17k visitors. He’s also taken a break from social media while he’s been outdoors on his old John Deere tractor. But that doesn’t mean he’s ignoring the marketing aspect. With some excellent Wine Enthusiast scores in hand, including 96 points for the 2018 Bald Mountain Chardonnay (Editor’s Choice), he’ll be reaching out to customers to share the good news and maintain brand mindshare.

As scores and wine quality rises, his prices have done the same. “As our prices have increased, we may have lost some customers, but the ones we do have are buying more wine, so that’s kept our growth steady.”

In January, he bought a brand new $20k crémant tank from Italy, which he’ll use to make a quick-to-market style of sparkling, most likely a rose. He’s excited to have a new tool that can rapidly bubble up a fermentation and then ready it for bottling, in just over a month’s time.

Beauregard expects the newly acquired Davenport tasting room to be an important piece of the recovery plan, once restrictions are eased. “I plan to open the Davenport tasting room for pickup of orders, as I expect tons of people will be heading to the coast. We have 6.4M people in the Bay Area who will not be flying anywhere on vacation any time soon. People will flock to the coast in droves. We will probably have a table outside, so people don’t even come in. Eventually, we’ll do tasting by appointment. All kinds of logistics to work out.” The Davenport tasting room, which was formerly occupied by Randall Grahm’s recently sold Bonny Doon brand, was to have opened in early April. But the pandemic threw a monkey wrench in that plan.

Beauregard is planning to do tasting by appointment at the “Lost Weekend” Bonny Doon location as well, once restrictions are eased.

Regardless of what happens, he maintains an upbeat philosophy that we can all take a page from. “Every single problem I have had in life (be it personal or business) has been a cause for opportunity, if I look for it. No opportunities have come my way yet, but I am optimistic that we will be just fine in the long run. I just keep foraging, he says. “Never stop. As always, the cup is 1/2 full. Just have to be creative.”