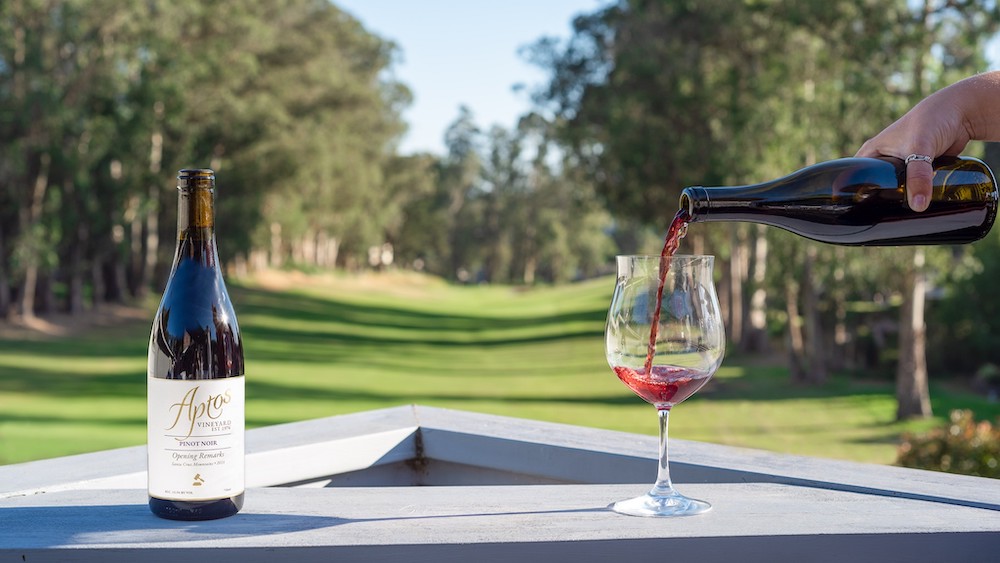 February 26, 2021 – Some might remember the Aptos Vineyard label, begun in 1974 by popular Aptos resident Judge John Marlo. He was a gregarious community member, according to his friends, and he had one thing that helps build relationships and goodwill faster than a light sentence: a vineyard and a wine label. He grew, or we should say, attempted to grow mostly Chardonnay and a wee bit of Pinot Noir in a cool, fog-drenched area of Aptos behind the library, which proved no small feat. And there was lots of mildew. Some years, the crop was as void as a jury box during flu season. But John and his wife, Patti, persevered, giving their neighbors and friends the gift of great local wine.

Legend has it that David Bruce himself made some of the early Aptos Vineyard wines for Judge Marlo. Other local winemakers took their turn, including John Schumacher of Hallcrest in Felton. The label continued until the good Judge fell ill from myeloma in the mid-2000s, during which time the label and vineyard went fallow. Judge Marlo passed away in 2015, at 81. His good friend, golfing buddy and wine lover, James Baker, got to thinking it was time to revive the label and purchased it in 2018. A collage of old Aptos Vineyard labels shows the progression of the design through the years, and you can clearly see that the current version has its roots in the past.

The brand’s revival is a family affair, involving three generations of the Baker family and their respective spouses and partners, and is providing all involved with a deep-dive education in the wine business. One thing they definitively decided not to do was plant a vineyard.

“When I turned 80, I wanted something to do, but I didn’t have any interest in growing grapes,” says Baker, an avid golfer and woodworker, who delights in crafting beautiful wooden bowls on his lathe. “I got to talking to Chris and Alex and we decided we could procure grapes. Having wine to share and keeping the name alive for the locals is what I am doing this for.”

Granddaughter Alex is general manager of the project (she is also tasting room manager at Ser Vineyards), and her Mom, Tina Cacace-Baker, who is married to Jim’s son, Chris, is co-owner, along with Jim. They’ve divided up tasks nicely, with Alex tackling all the marketing, design work, label creation, website and overall management, while her Mom helps spread the word to local shops and markets. Jim is also a brand ambassador, making sure his favorite places like Corralitos Market are stocked with Aptos Vineyard wines. They are also available at Deluxe Foods in Aptos and Staff of Life in Santa Cruz.

Which brings us to the wines, and the winemaker. Jim told us, “We started looking around for a winemaker, because we knew this was key to producing a great wine. We asked around among our friends, ‘Who makes the best Pinot and Chardonnay here in the area?’ And we kept hearing one name over and over: John Benedetti of Sante Arcangeli.”

So they approached Benedetti about a partnership and he promptly agreed. It was an ideal arrangement, as Benedetti is connected to many local vineyards and was able to get them some fruit from the well-known Lester Family Vineyard in Corralitos, as well as Pinot Noir from a vineyard he had recently begun working with in the hills above Soquel—DaLarDi on Stetson Road. This one is an absolute gem, judging by the drone footage on their website. The Baker family has enjoyed visiting it and tasting grapes as they ripen, marveling at its setting among redwoods and madrones, with a splendid ocean view.

What’s the verdict on the wines? Guilty, of course, as in guilty of being a serious pleasure to drink. Fittingly, they are named after courtroom jargon to honor Judge Marlo’s long career: he started as a San Jose police officer after graduating from San Jose State, then attended Santa Clara University, becoming a civil attorney and then the Capitola City Attorney. After that, he served as a municipal and superior court judge from 1973 to 1993, before retiring.

The Pinot Noir is called “Opening Remarks.” Baker explains it’s the first procedure in a courtroom. “For us, it represents the newest vintage in the next era for Aptos Vineyard.” The Chardonnay is called “De Novo,” Latin for to begin anew. It is a term commonly used in court when trials reconvene.

If all courtrooms poured this Chardonnay, trials would go much more smoothly and harmoniously.

Let’s open with the 2019 Aptos Vineyard De Novo Chardonnay from Lester Family Vineyards in Corralitos. Benedetti told us the wine saw 20% new French oak, with DAMY and Montgillard barrels, both of which are Meursault cooperages. He used

25% whole cluster, which adds more mid-palate and structure, and employed two different yeasts in the two different barrels: one was inoculated with D47 yeast, the other with CY3079. Barrel fermentation adds richness and texture, and this wine lacks for neither. It is redolent of daffodils, Gravenstein apples, crisp pear and warm barrel toast, with flavors that lean towards lemon-lime, crisp apples, pineapple, coconut and marshmallow on the finish. It’s a wine that starts out with citrus and progressively reveals its tropical core, in a fascinating progression.

Our next witness is the 2018 Opening Remarks DaLarDi Pinot Noir, a unique marriage of classic and modern mountain Pinot Noir. Crafted of Swan and 667, it brings the exotic floral and cedarwood tones of the Swan clone, which give it aromatic prowess and a lift of redwood forest floor, along with heady raspberry fruit and a touch of tarragon. A distinctive Summit sagebrush aroma is imparted by the 667, along with juicy cherry fruit and a touch of tea leaf. Through it all, a delightful tension of sweet and savory plays out like an elaborate dance, a swirl of sumptuous satin gowns on the long, delightful finish.

Benedetti chose this vineyard because it reminded him a bit of the Split Rail Vineyard, in terms of elevation—1500 feet— and exposure to the ocean. Unlike Split Rail, it’s a young vineyard, planted in 2013 and in good shape. At just about 2.5 acres, it yields a total of 5 tons in a good year.

With no tasting room and the Covid pandemic putting the kibosh on events, the Aptos Vineyard folks have been relying on word of mouth and social media to spread the word. They hope to create some exclusive events for the release of the 2020 Pinot Noir rosé they have awaiting bottling, and the official release of the 2019 DaLarDi Pinot Noir. For 2020, they have a Pinot from Saveria fermenting in barrels. Sadly, smoke damaged the DaLarDi fruit last year, but the Saveria should be an exciting new day in court, as it were.