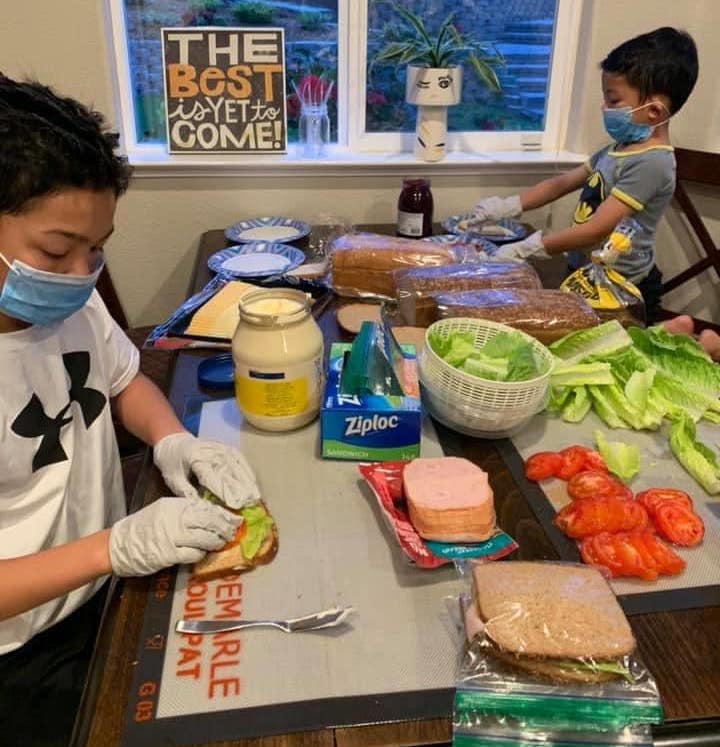 May 5, 2020 – It all started with sandwiches. Early into COVID pandemic days, stay-at-home mom Tanya Kosta of Salinas stopped by Dorothy’s Kitchen in Salinas to drop off sandwich fixings for those dealing with hunger and homelessness—only to learn that the nonprofit was no longer allowed to bring in volunteers to assemble them.

Kosta called some friends, enlisted help and delivered the pre-made sandwiches the next day.

A similar moment ensued not long thereafter. Kosta was delivering goods at They Are One, a Salinas Warming Shelter for those struggling with homelessness. But when she arrived with a car load of pancake mix, cereal, milk and oatmeal—the coordinator responded with a puzzled look. Turns out They Are One doesn’t have a kitchen to prep pancakes. So Kosta asked a pair of pals if they could make 100 pancakes each. She dropped off ingredients, went home and whipped up 100 with her kids, and the next morning had several hundred pancakes for TEO.

She was also picking up on a pattern and as a volunteer event coordinator for Legal Services for Seniors, Kosta understands how a little organization can go a long way. At the same time, she could feel the weight of so many individuals out there wanting to help, just not knowing how.

So she called her friends, many of whom had collaborated on a Christmas family toy drive this winter, all of them moms who she suspected would be all in.

“These were women who always stepped up in the past,” she says. “I put together a little dream team.”

Jessica Faddis, Deeana Healey, Lori Miller and Yesenia Velarde lept to action, creating a Facebook group called ALL IN Monterey, encouraging locals to participate and contacting local service providers to see what donations would be most helpful and what families could use special support.

“People wanted a way to help and we wanted to make it easy,” Kosta says. “We do our homework and then we reach a lot of people.”

They also prioritized a principle: no stress. In other words, give with joy and not obligation. We’re in this together, part of a bigger picture. Any and all donations, big and small, are vital—no competitive giving here. Privacy and dignity of those served is critical.

“We are one team,” Kosta says. “We ask that every person check in with themselves and their families and make sure the feeling they get from ALL IN is only positive. If it becomes ‘I don’t have enough time’ or ‘I can’t afford this,’ it is OK! No pressure…we never want anyone to feel stress. We want everyone to feel great about helping others or feel comfortable receiving help from us. One week you may be in a position to help and that is awesome; the next week you may need help and that is completely acceptable and welcomed.”

Nic Bianchi, kitchen program director for Dorothy’s Kitchen, identifies another less intentional but no less important part of the mission: It is bringing a lot of families together around a meaningful task. “Many of the people serving with ALL IN are families, and this motto of humility and love is a witness not only to other adults, but the children involved,” he says. “This kind of service changes people, not only those who serve, but those who receive the service.”

Back on April 9, unofficially Day 8 of ALL IN, a special donation triggered a growth spurt in outreach. Through her capacity as executive director for the Carmel Youth Center, Faddis teamed with CYC board member and Flaherty’s Seafood Grill & Oyster Bar owner Ken Spilfogel to secure an entire truck full of restaurant perishables. What was likely destined for a food waste fate—eggs, meat, cheese, tortillas, fruit, vegetables and more—was bundled into around 500 ALL IN food boxes.

The ALL IN team started making calls to shelters, food pantries and churches, while emailing Monterey Peninsula Unified School District leaders asking them to identify families in need.

Faddis believes the overall mission is an extension of their feminine instincts. “Women are built to make sure everyone is fed,” she says. She also believes the truckload donation/ALL IN boxes drive catalyzed something in the group. “We knew we didn’t want [our work] to end there,” she says.

Less than a month later, ALL IN counts around a dozen partners built largely from that uptick in outreach, including churches, shelters, family centers and schools. As this piece publishes, ALL IN Monterey is approaching an estimated 10,000 meals distributed.

Getting involved is easy, by design. Every weekend the group checks in with its roster of partners on what they need and posts a master wish list to its Facebook page each Sunday. This week, in fact, is Spaghetti Week, with a focus on pasta and sauce. Donors can message with what they have to offer and receive a time slot to set out donations for pickup on their front step on Mondays and Fridays. (Mondays lean toward pantry and household items like diapers; Friday is typically dedicated to “Operation Sandwich.”)

ALL IN then works every weekday to sort the donations and conduct volunteer-driven deliveries. Cleanliness is baked into the DNA of the operation, with an emphasis on ample use of sanitizer, gloves, masks, and self-quarantine if there’s any hint of illness.

Bianchi of Dorothy’s Kitchen is among those who admire the jump-to-action attitude of the ALL IN crew and its network of contributing families.

“When the Covid 19 crisis was suddenly upon us, in a very short period of time we were almost out of food and our volunteer base was unable to continue supporting us with food prep and serving,” he says, “ALL IN was able to get us immediate help and willing to brainstorm on how we could serve meals to our population without volunteers. This help was immediate, we didn’t have to fill out forms, written requests, or have lengthy conversations. They just got in and helped!”

As ALL IN moves into its second month in operation, it’s not uncommon for its army to craft 1,000 sandwiches for Friday pickup. Given so many numbers surrounding the coronavirus can be heartbreaking, that’s an inspiring number to note. Another impressive stat: Despite its short life span, ALL IN has inspired more than 800 local residents to join on Facebook.

When asked if she might single out a particular takeaway from their work so far, she adds this: “I guess I would love to remind people: No matter how big or small a donation is, this style of neighborly helping is working.”