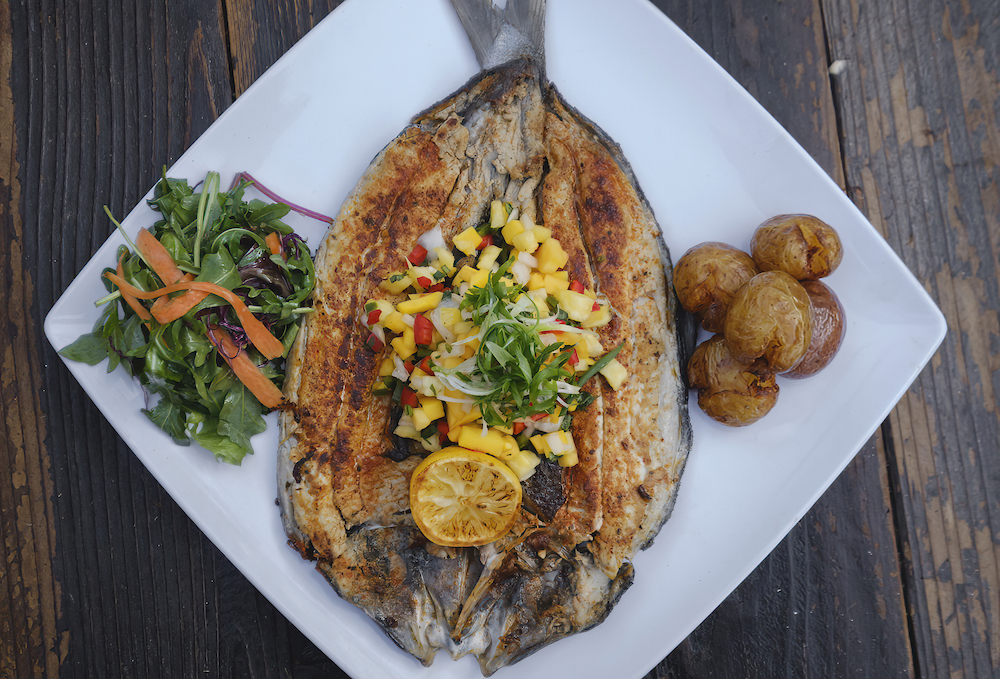 March 9, 2021 – Maybe you know the type. You do if you eat out (or once did). It could be a host or a chef or a server or a restaurant-lifer-turned-owner-operator. The key thing they have in common is they’re clearly born for hospitality—which is a way of saying they’re a) 100-percent a people person; b) 100-percent committed; c) multi-talented; d) blessed and cursed with the heart of a servant; e) in love with food; f) crazy AF.

Dexter Salazar is that type. So when he told me his heart wasn’t really into the restaurant game anymore, I felt a disturbance in the force.

We probably met at Tarpy’s Roadhouse, but I first remember Dexter when he ran Constance Wine Bar. It was small, humble and quirky, and had no business being the most social scene in Carmel. But it was, largely because of his welcoming energy and knack for stocking interesting and affordable wines. A youthful early 30-something at the time, he had already been in the industry a decade; one of his earlier stops was running Renee’s Bistro, now Ambrosia Indian, where he talked his culinary-schooled cousin into being a sous chef—which factors in beautifully later.

When he opened Affina Food + Drink in 2014 I wrote it was “precisely what Carmel needs.”

After a half decade Affina gained enough renown James Beard House came calling with an invitation to cook at its New York headquarters. But not too long thereafter COVID came calling too. At the time, Salazar had recently bought out Izard. He started wondering how restaurants could—or would—emerge from shutdowns. He had deep-pocketed buyers on the line and other businesses to cultivate.

Then his dad Edwin Salazar—who loved Affina and was the hero of their home city in the Philippines—died of kidney failure six years into dialysis and three months into the pandemic. Visitation and proper burial were compromised, which made the loss that much harder. For Salazar, who is close with his parents, that felt like a final indicator it was time to go.

Only his family had other ideas.

Salazar doesn’t want this to be a sad story—“The whole world got hit bad last year,” he says—but the thing is, it’s pretty much the opposite, because of the family’s response to his dad’s death.

He and his brothers Jasper and Lester got to talking. The younger cousin chimed in, this time bringing increased street cred with him: The kid who was once a paid intern in Monterey has blossomed into a celebrity chef. Jonah Trinidad now has his own high-voltage TV and consulting cooking career in the Philippines.

They echoed something Edwin would often say himself.

“Don’t sell it,” Trinidad and the brothers told Dexter. Instead, they added: “Let’s do a tribute and go back to our roots.”

Dexter concedes it made sense.

“We could go back to what we know best,” he says. “What’s an Asian guy doing with a Mediterranean restaurant in Carmel anyway? I wanted to be more unique.”

And best of all it would honor a patriarch’s wish. Edwin’s Carmel, with the tagline “Kaona!” (“Let’s eat”), opened quietly late last week.

The roots for Edwin Salazar, son of a pig butcher, reach back to Kibawe in Cagayan de Oro, on the island of Mindanao. He was the first in his village to graduate from college or own a car. For good measure, he would go on to become the Mindanao champion in tango and cha-cha.

“That’s why we have the moves,” Dexter laughs. “Crazy story, my dad.”

Edwin Salazar’s gift for engineering would take the family around Southeast Asia—Malaysia, Indonesia, Singapore, back to the Philippines—as he worked for palm oil producers.

“Edwin was an engineer building refineries,” Dexter says, “but he was really a chef with my mom.”

At each stop they explored night markets and the flavors that now pop from the menu at Edwin’s: sambals of all sorts, marinated pork bellies, Manila clams, Thai chilies, fermented fish pastes and even ube, or purple yams.

Edwin knew his food well enough to co-create wildly popular quick-fry brand Indomie noodle, but the main reason those flavors pop is Nelia Salazar. Her techniques are the bedrock for a menu Trinidad oversees from afar (while working on a visa), which is fine by him because he grew up entranced by her cooking. Nelia and Aunt Grace Salazar (Edwin’s sister) all pop into the kitchen, while stalwart chef de cuisine Heliodoro Garcia holds the ship together.

“My mom’s recipes, with high quality meats chef James [Anderson] introduced me to, and my cousin blending them together and adding a Carmel touch,” Dexter says, describing the new cuisine.

The menu is suddenly the most interesting in Carmel’s restaurant-heavy scene, available at seven tables in two parklets, for lunch and dinner, or for pickup.

Immediate favorites include the Balinese fried chicken, cool-marinated for hours with island herbs like lemongrass, bay leaves, achiote, garlic, ginger, calamansi and galangal in a sweet soy sauce then later dipped in buttermilk, deep fried and served with prawn crackers and a choice between egg fried rice or nasi goreng.

Some Affina staples persist with new twists, like the newly renamed “Edwin’s” grilled cheese, the former fontina-and-cheddar take suped up with a cut of marinated, thin-cut, panko-breaded, deep-fried pork chop. (I told you Edwin’s dad was a pig butcher.)

Tasty details round out the experience, whether it’s a strong Red Horse Filipino beer to go with the kare-kare or ube ice cream to go on top of a Karen’s Cookie for dessert.

The key detail, per Nelia, is the thing that kept the family and friends coming to her home in Southeast Asia, and now are keeping the restaurant alive: love.

She remembers Lester’s friends asking him, “What is it about your house that makes it so all the food is so yummy?” Young Lester’s reply tickled her ears and melted her heart: “She cooks it with love.”

“I am proud of my boys, the three of them, and my husband too, that they’re using his name,” Nelia says. “Remembering and honoring the dad who worked so hard for them.”

So it turns out there were very good reasons Dexter’s feelings on restaurants changed. And they’ve led to the best way to restore them.