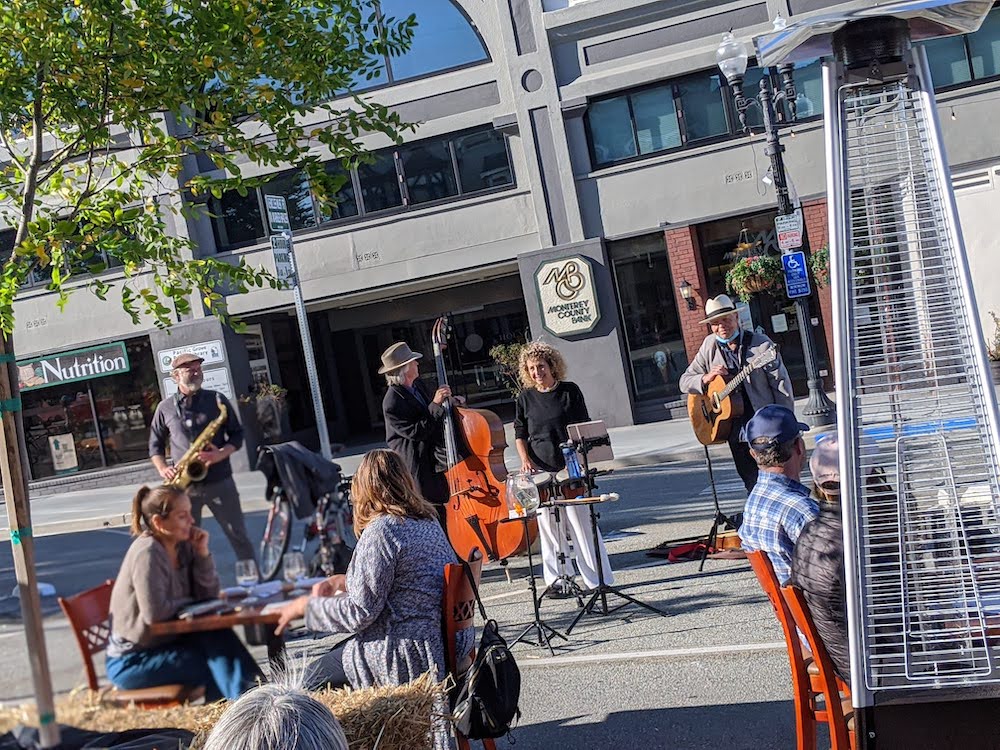 “After 15 years, Holly’s will be closing [its] doors,” she wrote on social media. “It has been an amazing run—I wouldn’t have traded the time for all the world and I know my mother felt the same way.”

Unsettling risks and an uncertain timelines contributed to the decision.

“[As the] COVID-19 crisis set in it became clear that we wouldn’t be able to be the Holly’s as you all knew it again, perhaps for a very long time,” she continued. “The safety of my family, my staff, and all of you comes first. We simply weren’t set up for a pandemic, and the difficult choice had to be made.”

The final stanza of the post was also the sweetest: “I would like to personally thank all of you for your years of patronage and support and above all else, LOVE! The community support for my mother both before and after her death will always mean so much to my family and I, as will the support you all showed as I took the helm. Thank you all so so much from the bottom of my heart.

“We will miss seeing your faces in the cafe. Thank you all again—serving all of you breakfast over the years has been a joy and I will miss it.”

The good news is Hanmer will still be taking dessert orders—as many as she can handle, she says—via call or text beginning Thursday (831-601-4809).

The bad news is she may be joined by a number of signature Pacific Grove spots in going dark. That reality has come into view more clearly of late with Holly’s shuttering, the closing of new Lighthouse Avenue neighbor Cream and Crumbles, and controversy over P.G. Al Fresco, whose primary function was to throw restaurants a lifeline.

The month-long experiment was initiated through emergency powers, granted City Hall in times of crisis. The trial program aimed to close two non-contiguous blocks on Lighthouse to allow for physically distant dining, live acoustic music and more in the street. The lively scene a weekend ago summoned hope for a new model, but was voted out of existence by the City Council 6-1 a few days later.

Many in attendance for PG Al Fresco’s Friday and Saturday evenings were as surprised by the vibrancy in the streets—“The coolest thing I’ve seen in P.G. in a while,” one passerby said—as they were by the council vote. I was surprised the chamber and BID sent a statement denying support before it began.

But a little digging reveals good reasons why.

Edible Monterey Bay spoke with several city officials, three city council members, chamber of commerce and Downtown Business Improvement District (BID) board members and a number of restaurant owners to explore the factors involved in its quick end, and what hopes remain for a second version.

Here appear the factors that played in:

• A lot of passion

One of the tensest moments of the Great Al Fresco Debate came in a BID meeting on Zoom. Vocal local restaurateur Tamie Aceves, who owns Crema on Lighthouse, was stunned when longtime Pacific Grove Chamber President Moe Ammar told those online not a single business owner had expressed a positive opinion of the street closure.

“That’s a lie!” she yelped, knowing she had expressed appreciation for it, and not realizing she was accidentally unmuted. A flash of chaos on little rectangles ensued.

Ammar admitted later he misspoke, adding he was put on the spot by BID chair Tom McMahon, who—after hearing how dozens of local businesses had expressed opposition—asked Ammar if he had heard anyone at all endorsing it.

While Aceves has lost some faith in BID and the chamber’s process, she emphasizes the importance of compassion.

“I know everybody is afraid, stuck in their houses, and worried about [infection],” she says. “But people aren’t looking at the bigger picture: If you don’t have healthy restaurants, the retail will suffer, everything will suffer. No one has to drive through P.G. Those saying, ‘I won’t have parking!’ are not able to step back. Everyone is just looking at their own small thinking.”

“Our restaurants provide a lot for our locals and visitors,” she says. “They’re vital for our economy and hotels. Tourism is our number-one income.”

“That would leave tremendous gaps,” she says. “Let’s do something that brings in visitors and locals and allows them to be safe. Our restaurants are weeks away from closing. This is an emergency, and I’m very concerned.”

Councilmember Amy Tomlinson feels like the fleeting experiment provided “a lot of data points to learn from,” but was fundamentally flawed.

“I wanted to support the idea,” she says, “but the fact it came top down rather than bottom up, homegrown, from the stakeholders, meant I voted against it.”

Al Fresco closures can require serpentine routes to reach scores of popular businesses and key institutions like banks and the Pacific Grove Post Office. The City Council, however, had no way to steer the plan in a different direction.

“The ratification was all or nothing,” Councilmember Jenny McAdams says. “We weren’t allowed to modify the plan. I felt like we started at the wrong place—like we were going backwards. That’s why so many of our residents and businesses had such a reaction. They were surprised about the way it was orchestrated.”

Chamber President Moe Ammar says that when the closure was announced June 3, “the s*** hit the fan.”

“I was bombarded with calls from retailers,” he continues. “The top five revenue producing restaurants all opposed it. Peppers [Mexicali Cafe, one of those top earners] has never opposed anything. They’re all saying, People won’t get to us.’”

He believes he’s never seen a single city do a street closure successfully, which is dubious at best. He makes valid points from there, including the fact that more planning and transparency around Al Fresco would’ve been helpful.

And that the numbers speak for themselves.

“You restrict access to 28 other businesses because of one restaurant on the block, Poppy Hall?” he says. “How stupid is that?”

Edible heard from several sources—on background—that the death knoll for Al Fresco might’ve come early, when the chamber and BID were caught by surprise.

“Mo and Tom [McMahon, BID chair] were furious the plan wasn’t run past them,” one of those sources said. “That’s when things really devolved into a fight.”

With his jeninni kitchen + wine bar at the front porch of the Lighthouse blocks that closed, Thamin Saleh stands to benefit from Al Fresco as much as anyone. He would have almost as much accessibility, and first stab at a potential customer. Still, he balked.

“I stayed away from taking an official vote, as it was going a little too fast, a little too ambitious, and there were some other options, like pursuing a parklet situation,” he says. “Closing the whole Lighthouse for a few restaurants is tricky.”

He adds that the balancing act is treacherous.

“Restaurants are in an awkward spot,” he says. “We need the help, but at the same time we cannot have locals or other businesses mad because they’ll hold grudges and now we’re not the ‘good neighbor.’”

• An inspired dose of self-government

While Saleh chose to abstain, plenty of others didn’t, beyond the City Council and the 6-1 tally. The Downtown BID voted 6-0 against Al Fresco. The chamber board went the same way, 15-0. On the lively Zoom call attended by a range of restaurant and business owners, the vote followed the same direction, 16-1, with Wild Fish’s Liz Jacobs voting for Al Fresco.

“This is a case where democracy rules,” Ammar says.

• An absence of input

EMB caught Cindy Walter as she readied to cut new fire-retardant curtains from a huge roll in her driveway for Passionfish, one of those top revenue earners, which she runs with her chef husband Ted. The task came after P.G. Fire told her that the existing protective shower curtains between tables had to go.

“There’s all these little things, so much that we have to do, and that costs real money,” she says. “It adds pressure to reopening when there’s already so much to deal with.”

While she was entertaining the idea of doing outdoor dining, or even setting up a booth in the closed-off blocks, staffing and new COVID costs made it unwise. She believes greater dialogue helped seal Al Fresco’s fate.

“The idea comes from a good place,” she says, “but there should have been more conversation with people on those blocks.”

One popular idea is parklets in front of restaurants, but several owner-operators like Walter sound that much more drained when asked to consider another buildout expense—and one that for some would have to include spendy safety measures to protect diners from cars passing in the street.

• A flash of fresh ideas

Councilmembers on either side of the vote stand eager to find adapted plans that keep the spirit of Al Fresco alive. Like nearly everyone interviewed for this piece, they believe closures should be structured for limited hours on weekends or a special night. Both Garfield and McAdams also like the idea of a one-lane pedestrian space.

Garfield envisions directional signs for both parking and shopping locations, kiosk displays to draw people to a different block, and seating areas so people can hang out while not at a restaurant.

“Yes, it will be a bit messy at first, but we want people to linger,” she says. “A patron that parks in front of only one store and then leaves is missing a lot. We can create a destination experience where both visitors and residents can take time discovering things they didn’t know they were looking for.”

She adds that any plan should come with a long enough commitment restaurants and stores feel they can invest in staffing, displays and seating.

McAdams calls closing one side “a happy medium.”

“We have to be innovative,” she says. “Parking spots versus keeping a business open and keeping jobs is not even a discussion as far as I’m concerned.”

• A window into what Pacific Grove’s missing

For a brief moment there on Lighthouse, Pacific Grove was a little younger, a little more populated, a little more walkable, a little more musical and a little more diverse than normal. As issues of representation and access gain visibility through Black Lives Matter protests, that provides perspective on a community’s default setting.

Aceves has been thinking about it through the lens of an open-air destination that doesn’t have to be on Lighthouse.

“Let’s open up a city square thing and invite people from outside,” she says. “P.G. is ridiculously white. We’re on the verge of big changes because of COVID and new civil rights progress—they’re already happening—why not embrace them? People who are younger and have a different vision for the future hopefully can be a part of this. People who have been here a long time say, ‘Why change? Everything’s fine.’

“But what got us here is not gonna get us out of here.”

• A call for a unified vision

Today a range of restaurants, including the main participants at P.G. Al Fresco, are gathering with councilmembers and city staff to discuss a Pagrovian version of the restaurant coalition that helps direct Carmel’s scene.

Councilmember Tomlinson is among those calling for a potential coalition to meet with BID and the chamber.

“I’d love for them to get together, collaborate, come up with an idea they want that’s fair, equitable and forward-thinking and present it to the city so we can approve,” she says.

Then she pivots to speak directly to the BID and the chamber.

“It’s on you,” she says. “The ball’s in your court. Come up with a plan to help restaurants make it through this challenging time. The city is standing by to support and ready to approve what you come up with.”