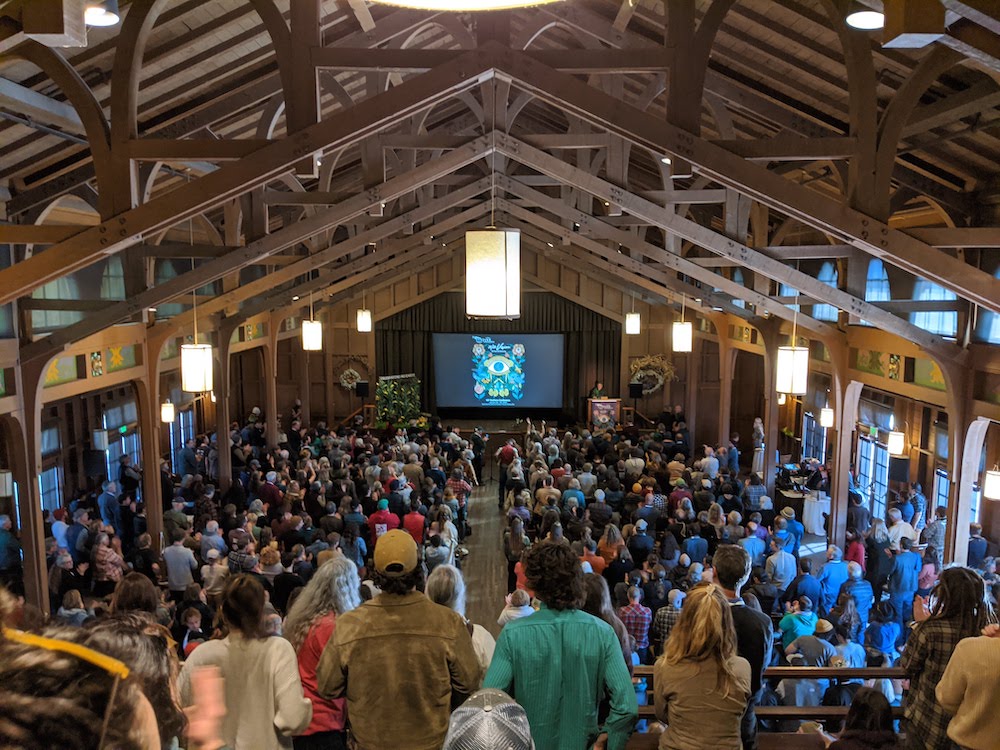 January 28, 2020 – I would not be mad at anyone who skipped every mind-blowing keynote and workshop session, and came to EcoFarm exclusively for the special events.

“Someone calls me a bird brain and I say ‘Thank you,’” she said last week. “Birds are always up to something and every something has a reason.”

We saw an Anna’s hummingbird doing insane courtship maneuvers in the sky, red-shouldered hawks nesting in a soaring pine, a ruby-crowned kinglet catching flies, a black phoebe showing off its electric yellow inner mouth, scrub jays and stellar jays squawking and scrumming, and a dark-eyed junco hopping around the forest floor with friends.

Then there was my hero—with the incredible silhouette and even better name—the puffy little pygmy nuthatch, doing core work dangling from a branch while chomping pests that would otherwise mess with pine tree and ecosystem health.

She could’ve been referring to EcoFarm’s legion do-gooders too.

The bird walks are open to the public every Wednesday at 9:45am. Also open to the public: Asilomar, which is a magical place to host a conference but also a great place to combo a bird walk (with black phoebes) with lunch (from Phoebe’s Cafe) on the big deck.

These conclusions—1. Special events is right! and 2. Asilomar rules—were two unsurprising takeaways from an inspired 40th installment of EcoFarm. Fortunately the weekend allowed for an overload of other takeaways. Here appear 14 more:

Health and food are connected?!

This was simultaneously the biggest “No duh” and “Oh dang” of EcoFarm 2020, as Dr. Rita Nguyen of the San Francisco Department of Public Health and UCSF School of Medicine pointed out. “It’s crazy that we have this as a study—look, evidence that eating healthy improves health,” she said. “But people want to know numbers in the food and medicine fields.” The “Oh dang” at the session titled “Health Care Revolution: Prescribing Organic Food as Medicine” comes when those stats hammer home the preventative power of good food—to the tune of…billions. It happens again when I hear Nguyen and company are making incredible strides literally prescribing ingredients, recipes and healthy staples to the ill. National Food as Medicine Coalition, which has local and regional reps out West, is leading the charge. In Northern California, a group called Ceres Community Project is helping youth farm and cook for those who need it. “Healthcare is starting to wake up,” Cere’s Cathryn Couch said. “When it comes to [food as medicine], every private insurer has at least a toe in the water.”

Forty years is a long time.

With Peruvian lilies, portraits and testimonials, a very special room alongside Asilomar’s chapel space celebrated organic pioneers who have passed on to that pest-free garden-in-the-sky. It also spoke to the staying power of a global resource. “It’s been vital to building a base of support for organics in California and nationally through the exchange of information on successful models and practices,” executive director Andy Fisher said. “On one hand it’s a place where growers can learn from each other about how to grow successfully and ecologically. On the other hand, it’s a place for celebration, community building, and strategizing.”

Consumers don’t trust the USDA on organics. And they have good reason to be skeptical, as Real Organic Project’s Dave Chapman pointed out as part of a panel titled “How Can You Mend a Broken Organic System?” Current USDA rules allow for big and enclosed concentrated animal feeding operations (CAFOs) and plastic-heavy hydroponic systems without any soil being used to get organic ratings. Real Organic Project is pushing to return the definition to six basic things including no CAFOs, solid welfare standards and growth based in soil. “It’s simple things,” he said. “It’s what we mean by real organic. It’s not organic 3.0, it’s organic 1.0.” Other weaknesses like telegraphed inspections, weak penalties and limited data on production numbers are troubling too. Fortunately new ratings like ROP’s and fellow presenter Cornucopia Institute’s scorecards furnish hope, as does the CCOF seal.

Plants are energy and wisdom.

This is a basic tenet of biodynamic farming, which figured in prominently to “Tending the Wild and Our Garden,” one of the more moving sessions of the weekend, which is saying something. An emotional Corine Pearce (a Pomo basket weaver and environmental educator) told tales of ancestors and elderberry, and the panel discussed the balance between helping and controlling. “The goal is not to dominate the wild but to collaborate with it,” Delmar McComb of Blossom’s Farm said. “Like I cut my hair and brush my teeth. The wild likes a little help to thrive and regenerate.” Three not-too-obscure biodynamic resources were recommended in session: Weeds and What They Tell Us by Ehrenfried E. Pfeiffer; Culture and Horticulture: A Philosophy of Gardening by Wolf-Dieter Storl; and, yes, Tending the Wild by M. Kat Anderson.

Diversity is a real priority.

Fisher is quick to respond on what EcoFarm can do better: 1) Lots of things; 2) Diversify the attendance of the conference. “A few years ago, 90 percent were white,” he said. “We want it to reflect the demographics of the state. That’s a real tangible thing we can look at.“ There’s a ways to go, but the intention was real, acknowledged and vocalized at several junctions across the conference, starting with opening keynote speaker Leah Penniman living up to the name of her farm (Soul Fire Farm) while exploring farm food distribution program for communities living under food aparteid, organizing around equity in the food system, and themes from her book, Farming While Black: Soul Fire Farm’s Practical Guide to Liberation on the Land.

For a small farmers conference, big is often the enemy. But one polarizing XXL boy with lots of local ties, Driscoll’s Berries, deserves recognition for an award-winning film collaboration with Farm League studio, The Last Harvest. A peek at the synopsis: “The average grocery shopper may be surprised to learn that more than 75 percent of the fresh fruit consumed in the U.S. is completely dependent on hand-harvesting. Despite a rapidly growing $40 billion fresh produce industry, growers are in fear of a viable future as they struggle to find workers to pick the fields. More than $3.1 Billion is missed in economic growth each year as crops are left to rot in abandoned fields.” Haunting stuff.

EcoFarm is a fertile place for slogans.

Just a small sampling of the messaging in the exhibition tent proves entertaining. Note “Farm like the World Depends on it” (Regenerative Organic Certified) and “Make It a Flavor Adventure” (Monterey County’s own Andy Boy broccoli rabe, pumping up recipes found at andyboy.com). “¡Viva La Agricultura Orgánica!” was the most popular California Certified Organic Farmers sticker; Dreaming of a Vetter World, a new film about organic pioneer Donald Vetter reinvents a popular organic refrain with “Their most important crop is the soil.”

One in every three bites of food isn’t possible without bees.

Most are well aware of the bee crisis, but mention of the myriad ways humans depend on bees is always worth repeating—as is how much our chemically dependent farm system kills them. The painfully beautiful documentary The Pollinators is available for community screenings the week of the 50th anniversary of Earth Day this April 22, 2020 via demand.film/the-pollinators. Another good reminder that always bears repeating: One reason bees die is because pesticides are poison—and not just any poison, as many can be neurotoxins.

It leads the nation with on-site renewable energy (on-site as in on the farm). That was one glowing nugget from “The Road to 100-percent Renewables,” as was California’s goal for net carbon neutrality by 2045 across the entire economy, including farms, which trail only cars as unhelpful emitters.

Yerba Buena is more powerful than you think.

Some of the most satisfying sessions are the gardening how-to’s. At one of them someone pointed out San Francisco, home to a lot of the “good herb,” was originally going to be called Yerba Buena. That makes me happy. Not sure why. And makes me want to plant some in my yard and use it to provide relief for abdominal pain, indigestion, loss of appetite, gas, diarrhea and stomach aches.

Horsepower is so 2019. Introducing: cow-power.

Speaking of farm and car emissions…BMW and Straus Family Farms have come up with a cool partnership in which BMW buys electricity for its new line of e-vehicles from all-organic Straus, who generates it with methane digesters. Side note: digesters are spendy, which is why Straus is open sourcing all its technology to encourage other farms to manage emissions. “We want every farmer in our milk shed, any farmer in California, and our entire sector to be renewably powered,” said Straus’ Joseph Button.

Storytelling helps. So does the right mic!

Former Salinas Californian reporter-turned-Hudson Valley female farmer advocate Amy Wu led a session on farm-friendly social media strategies that was particularly lively. A few zingy tips: Focus on action rather than speaking; remember most people have not visited a farm; engage via comments; and, my favorite, make sure to invest in an external microphone. Top recommendation: RØDE mics, available for as little as $60.

All the special programming, and the fact that as many as 14 sessions happen at any given time, can paralyze people with FOMO. When I asked Fisher how he knows EcoFarm is working, he alluded to that. “People keep coming,” he said. “This year we will have 1,500-1,700 people voting with their dollars and their feet. It’s not cheap, yet people are willing to commit resources to make it happen.”

Don’t panic. You’re organic. Or at least welcome to join the party.

There’s a lot of amazing tools and opportunities to get involved with organic farming, including CCOF Annual Meeting & Advocacy Day in Sacramento Feb. 18-19, 2020, which will feature the release of Roadmap to an Organic California (more at ccof.org/2020-event). Just a tiny sampling of other resources appear here; more can be found through the EcoFarm website:

Real Food Campaign Citizen Science Program • Eaters can tag produce from various stores and send it in for nutrient testing and learn who is stocking the most nutritious food. (Grower partners are also encouraged to participate.) • realfoodcampaign.org

Woo-woo can lead to wow.

EcoFarm and its hippie heritage is famously unafraid to welcome in the spiritual elements of gardening. That found special expression with a closing session Saturday called “Personal Well-Being Through Nature’s Wisdom.” There was talk of personal altars, creating protection around land, how to listen to higher guidance, and how to use mugwort to cultivate dreams. Amid the abstract and heartfelt thoughts—which included celebrating rather than shaming grief, something that became powerfully relevant a day later with the Kobe Bryant tragedy—there was a great recommendation I jumped on: a free online course called Unstuck, from a site called Wildly Rooted by Vanessa Rodriguez, who also hosts a popular podcast. Both formats focus on feeding yourself physically, emotionally, mentally and spiritually through nature-based practices based in ancestral wisdom. In other words, woo-woo wow.