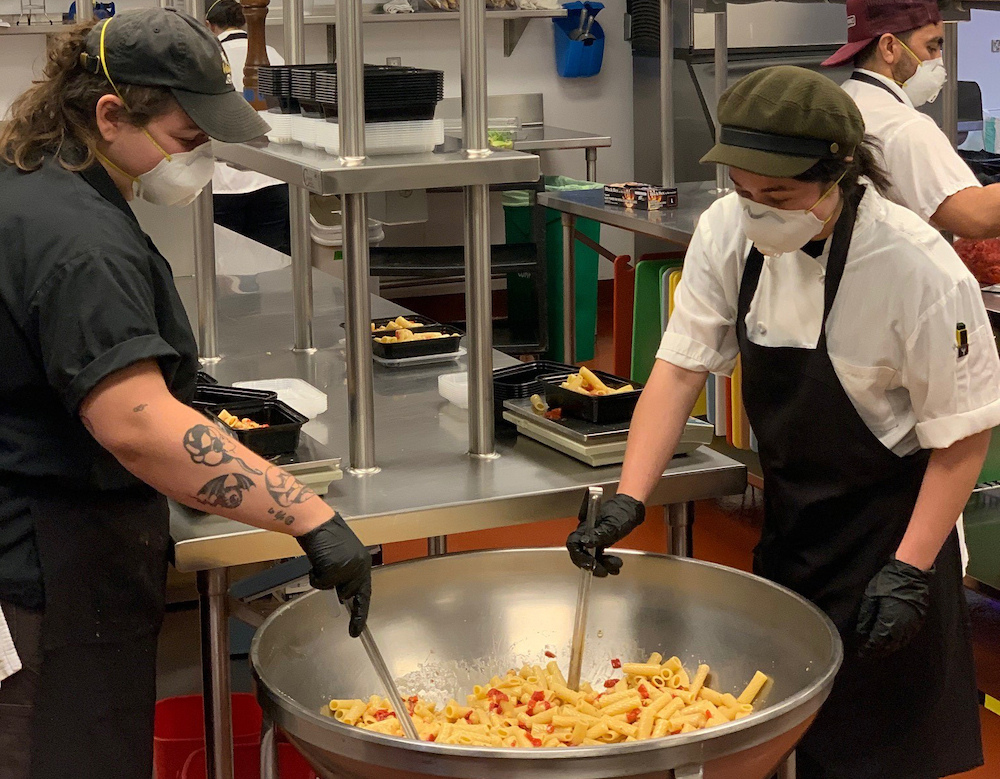 April 7, 2020 – Practicing what they teach, the kitchen staff at 1440 Multiversity are preparing hundreds of meals a day for homeless persons during the COVID-19 crisis in a new agreement with Santa Cruz County.

The luxury conference and retreat center in Scotts Valley closed March 19, when statewide Shelter in Place orders were announced, and owners approached the county looking for a way to be of service during the crisis.

“1440 Multiversity has always been dedicated to the well-being of others, so it was extremely important for us to figure out a way to support the global efforts taking place in response to this pandemic,” read a statement released by co-founders Joanie and Scott Kriens. “We are grateful that our campus has this opportunity to express an authentic love for others and has the resources available to meet the needs of Santa Cruz County. Hopefully our heartfelt contributions will energize and inspire others to do the same, to keep everyone as safe and healthy as possible.”

Under the initial two-month agreement, 40 kitchen staff led by executive chef Kenny Woods began preparing meals to be distributed to homeless shelters over the weekend. “I’m beyond grateful to be able to help as many people as possible with this opportunity,” Woods said in a text message.

Currently 1440 is preparing and boxing approximately 400 hot and cold meals a day—including breakfast, lunch and dinner—which are picked up by the county three times a day and delivered to four shelters, according to Santa Cruz County spokesperson Jason Hoppin. The number of meals will be increasing as new shelters are opened, such as one launching at the Watsonville Vet’s Hall next weekend.

Hoppin said the program is being financed with emergency funds allocated by Gov. Gavin Newsom to deal with homelessness during the COVID-19 crisis. He said word of new shelters being opened by the county is spreading fast within the homeless community and that they are filling quickly.

So far no one has tested positive for coronavirus at the shelters, he said, altho the county has also secured an undisclosed hotel to be used as a hospital for homeless persons should the need arise.

“We believe that individual health is the greatest asset our community can have, and we want to do our part of foster the wellbeing of others,” said 1440 managing director Frank Ashmore. “Hope comes from having a purpose and while we will be tested as families, communities, and as a country through this pandemic we will weather this storm, and look forward to a brighter future together when the skies clear knowing 1440 contributed its part.”

Additionally, as part of the agreement 1440 Multiversity has agreed to make part of its campus available as an Alternate Care Site, which is part of the county’s COVID surge planning. In the case that demand exceeds local hospital capacity, two alternate care sites—1440 and the Simpkins Swim Center —would be used to treat patients who need hospitalization but do not have complex medical needs.

Although the agreement ends at the end of May, it includes an option to extend on a month-to-month basis based on government mandates and orders in place.