“We’re seeing a slight dip in yield, with smaller grapes
and clusters, but the quality of the fruit is phenomenal, and
I’m really excited about the vintages that we’ll be seeing.”
– Dean De Korth, winemaker at Bernardus

It’s early November in the Santa Lucia Highlands, and there’s a flurry of activity on the 49 acres of the Double L Vineyard, home of Morgan Winery. Pickers move down row after row of Pinot Noir, Chardonnay, Syrah and Reisling grapes, plucking fat bunches from the vines. Trucks ride along the dirt roads, loading up hundreds of containers ready for transport to the winery’s facility in Salinas, where they’ll be pressed and most will be placed into French oak barrels where they will be transformed into award-winning … Read More

Rare fish: Chef David Graham is one of just a half dozen
or so sustainable sushi chefs in the nation. Photo by Ted Holladay.

“Just look at how beautiful this Arctic char is,” says Graham, showing off the plump, silky, 14-inch cuts.

“It’s sustainably farm raised in ideal conditions—no pollutants— and every bit as delicious as its cousin, the salmon.”

Moving down the row of fresh-as-can-be seafood, he holds up a slab of Tombo Ahi, a species of Pacific Albacore that isn’t suffering the same fate as its overly fished and endangered relative, the bluefin tuna. “It has a buttery taste, very mild and tender,” Graham says. As delighted as Graham is to display the … Read More

The bold lines of the Frank Lloyd Wright-style Point Pinos Grill were perfectly framed by the setting sun, the clouds over the ocean glowing in beautiful shades of red and purple. As a friend and I walked towards the restaurant door, we paused a while on the patio to drink in the magnificent view.

Coming off a renovation and revamping of their menu, we were truly excited to see what Chef Tom Stutzman—a New England Culinary Institute grad and renowned meal-maker in North Shore Lake Tahoe—had in store. From the moment we were seated and began to peruse the menu, we knew we wouldn’t be disappointed.

The new seasonal menu, which makes its debut for Monterey Bay Restaurant Week, brings forth all the delights of autumn in Pacific Grove. Using a palette of infinitely fresh, local ingredients, the carte du jour was an exercise in simple grace. Although it was very tempting, we opted to forgo the prix fixe offering and order instead from the standard menu. Broiled Castroville artichokes with a bacon aioli (“bacon makes everything great,” our server beamed) and superb Parmesan cheese started off our epicurean adventure, the artichokes perfectly cooked and bursting with flavor.

The entrees were venerable. Torn between pumpkin ravioli and fish, I ordered the latter. The California white sea bass—hook and line caught in accordance with the chef’s philosophy of serving only sustainable foods—was broiled to perfection, plump and still flaky and accented by a wild mushroom and bacon mélange rolled up in leaves of fresh chard. The seafood paella was nothing short of spectacular. Beautiful bay scallops, fresh clams and shrimp and a not-too-spicy sausage blended perfectly in the Spanish tradition, and the portion size was impressive.An autumn salad was next for me. It featured a heaping pile of fresh greens with tart green apple, chunks of persimmon, real-deal California white cheddar and light vinaigrette. My companion went for the classic Caesar, bursting with the essence of local anchovies and a not-overly-strong dressing.

Coffee and espresso were all we had room for after the repast, but it won’t be long before we venture back to indulge in the “grown-up S’mores” and house made ice cream. And of course the missed apps and entrees—from salmon to ribeye, gnocchi to calamari—no doubt warrant a second trip to this cozy spot by the sea.

Point Pinos Grill, located at 79 Asilomar Boulevard in Pacific Grove, is open seven days a week from 7am until 3pm for breakfast and lunch. Happy Hour from 3-5 pm Monday through Friday. Dinner Wednesday through Sunday nights (last seating at 8:30 pm.) 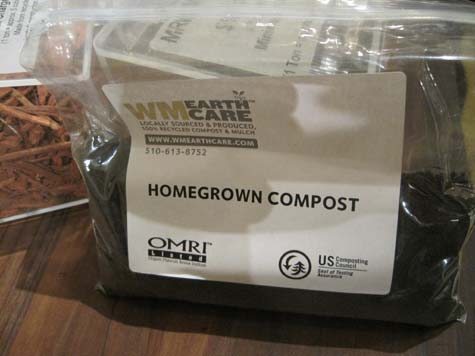 More than 50 eco-conscious souls packed the cozy and vibrantly lit space at Eco Carmel on San Carlos Street for a few hours of earth-loving education by Kristi Reimers, proprietor, and Jay Ramos, district manager of Carmel and Marina recycling for Waste Management and its EarthCare programs, Wednesday night.

While a representative from Heller Estate Winery—producer of 100% organically grown wines—kept everyone’s glass full, Reimers and Ramos answered questions from the curious on everything from the benefits of using completely organic compost and closed-loop landscaping (that diverts 1,000 tons of material from landfills every day) for their homes to Waste Management’s ongoing efforts to push single-stream recycling throughout the country. “We love to be here supporting Kristi and everything she does to raise awareness of sustainable living,” said Ramos at the Feb. 8 event. “We even repainted our facility in Salinas using her store’s eco-conscious paints, and converted our lunchroom with her recycled products. She helped us be truly ‘green.’”

And as much as people reveled in perusing Eco Carmel’s seemingly endless list of eco-groovy solutions for home and garden, Ramos had some eye-opening things to report, including Waste Management’s success at providing 100% trash-free, zero-waste services for events throughout the region—including the AT&T Pro-Am—and the company’s constantly evolving product line, including Alcatraz Aggregate produced from recycled concrete and reused as drainage and base rock for roadbeds.

“The turnout was great,” said Reimers, who loves to share her limitless passion for green living. “Jay and his crew are so knowledgeable and helpful, and I’m so grateful for the relationship we’ve cultivated over the years.” 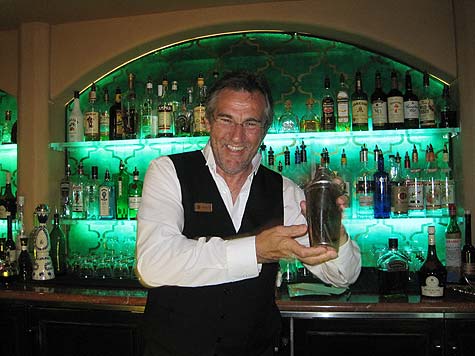 Taking some serious cues from the golden age of Hollywood, Terry’s Lounge at the historic Cypress Inn in Carmel (owned in part by Doris Day) unveiled this past Friday an extensive new cocktail menu that channels the movers and shakers of Tinseltown’s past.

Peppered with quotes by everyone from James Cagney to Cary Grant to Humphrey Bogart to Mae West, the new menu is itself something to behold, divided into sections on whiskey, gin, brandy, and rum, with each drink getting a nice little anecdote on its origin and history.

Consider this: the Sazerac—Old Overholt Rye, Pernod, muddled sugar cube, a dash of bitters, and a lemon twist—was the brainchild of a Creole apothecary in New Orleans.

Then there’s the Orange Blossom, a concoction of gin, sweet vermouth, and fresh orange juice that gives a nod to Ronald Reagan and is served with a side of jelly beans.

And don’t miss the Mary Pickford, a sizzling combo of Leblon, rum, pineapple juice, maraschino liqueur, and grenadine created just for the ingénue in the 1920s when she was in Cuba filming a movie with husband Douglas Fairbanks and friend Charlie Chaplin.

No doubt one of the major highlights of the new menu lies with the guy stirring them up. Bar manager Drago Cvetkovic counts among his past customers Frank Sinatra and other Rat Packers, and his skill with a shaker leaves little doubt as to why he was among their favorite mixologists.

If the standing-room-only debut is any indication, Terry’s Lounge is poised to become one of Carmel’s go-to spots, so be sure to head in soon and grab a classic cocktail with a side of Silver Screen aura. After all, as the incomparable Cary Grant so famously quipped: “Stingers—and keep them coming.”

Cocktails at Terry’s start at $9, a pretty reasonable charge considering the location and the quality and rarity of some of the ingredients. Open 11:30am–11pm, Su–Th; 11:30am–midnight F and Sa. Happy hour: 15% off M–F. Read moreCOCKTAILS AT THE CYPRESS INN, ANYONE?